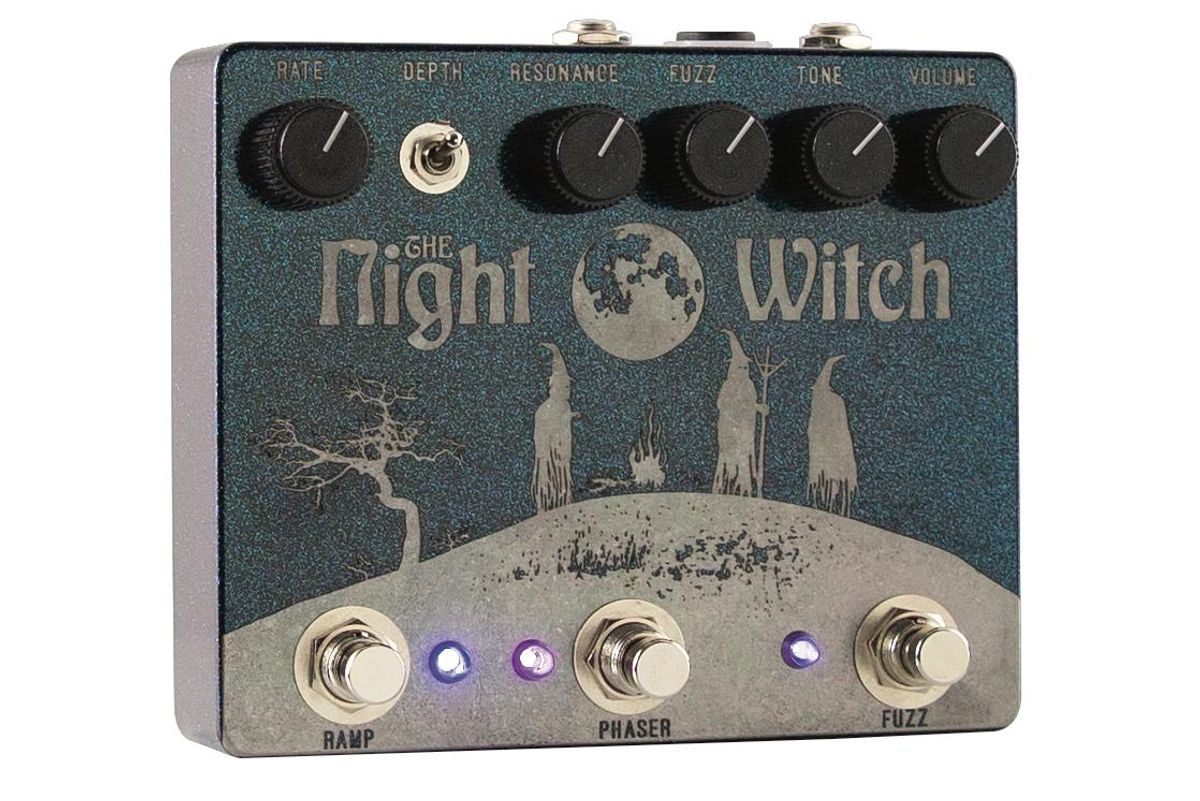 Maybe a touch too much evidence of handcraft for a $300 pedal.

The original Roland Jet Phaser, which combined the 8-stage phaser from their AP-2 with a menacing fuzz/distortion (the circuit from the awesome Roland Bee Baa is a good bet) made a seriously mighty roar. But it wasn't the most flexible pedal in the world. For starters, you could not operate the brawny fuzz independent of the phaser. And while the combined sounds were fantastic, there weren't a ton of ways to fine-tune them apart from a few preset voices, the resonance control, and the jet level, which regulated the gain intensity.

MSL's The Night Witch eschews perfect authenticity to address the shortcomings in the original Jet Phaser design. It makes the fuzz and phaser independently operable. MSL also opts for a switchable 4- and 8-stage phaser, and adds a tone control and master output for the fuzz circuit. It's a much more practical manifestation of the Jet Phaser concept. But MSL adds plenty of its own personality to this pedal, too. You could make the case that this is a much nastier take on the Jet Phaser than the original.

Gather ’Round at the Blue Mass

The Night Witch shares just three controls with the original Jet Phaser: the resonance knob, which is effective at taming fuzzy peaks and shaping the pedal's most extreme sounds; the phase rate knob; and the ramp switch, which accelerates or decelerates the rate between the rate knob setting and the circuit's fastest phase rate. The remainder of the controls make The Night Witch a more flexible pedal than its inspiration. The fuzz section has a proper 3-knob control array for gain, output, and tone—the last of which adds many tone possibilities that the original Jet Phaser cannot deliver. The depth toggle, meanwhile, takes the place of the preset voice switch on the Jet Phaser. Originalists may lament this change. But I found the 4-stage phaser option invaluable for sculpting more aqueous and subtle variations on the pedal's basically intense phase sounds.

The circuit board itself reveals traces of the pedal's homebrew origins: These aren't solders executed by robots in a turnkey assembly operation. But the pedal is arguably more robust for its handbuilt approach. Any one of the individual components looks like it could be readily replaced for repair, and the footswitches and jacks are all mounted independent of the circuit board itself.

Whirling Wail of the Witch

Even though MSL separated the phase and fuzz into independently operable circuits, the phaser is still very much the heart and soul of The Night Witch's idiosyncratic appeal. Its basic tonality is very much in keeping with the whooshing, rushing flavor of Roland's original Jet Phaser. Even the mellowest, low-resonance sounds from the 4-stage phaser are still pretty intense, but they can be really pretty in the proper context. The phase voice is distinct, too—neither squarely in the vintage Small Stone or Phase 90 camp (though I sometimes wish it had some of the former's dimensionality). The ramp switch is a sweet means of enhancing the phaser's flexibility, and switching between slow and fast speeds can add cool punctuation or melty transitions to solos and song segments.

Switching between slow and fast speeds can add cool punctuation or melty transitions to solos and song segments.

For many folks, The Night Witch's fuzz section will mark an improvement on the original Jet Phaser. This is not a remark I make flippantly. The original Jet Phaser's fuzz/distortion is bitchin' and super powerful. But The Night Witch's fuzz section is certainly more versatile. It preserves the essence of the Jet Phaser's very Bee Baa/Ram's Head Big Muff-like essence, but adds a bit more thickness across the whole frequency spectrum, yielding a basic voice that favors the Muff side, perhaps, but which is probably more adaptable and familiar for most players.

The useful tone control expands this utility. High treble settings make it possible for the fuzz signal to simultaneously cut through and enhance the most intense resonance settings. At the other extreme, low fuzz, gain, and tone settings combined with a neck single-coil, a little guitar-volume attenuation, and lower rate and resonance create a nice low-gain environment for soulful chord melodies and Jimi-style lysergic balladry.

The Night Witch most certainly projects menace. And wicked and wildly psychedelic voices exist here in abundance. But The Night Witch is also capable of sweetness and complexity if you get crafty and explore the possibilities of the flexible control set and the adaptive way the pedal relates to various guitar tone, volume, and pickup combinations. The Night Witch is not inexpensive, at 300 bucks. But its deep vintage-flavored tones, enhanced utility, and the cohesiveness with which the phase and fuzz interact make the whole more than the sum of its parts.

From Your Site Articles
Related Articles Around the Web
msl effects