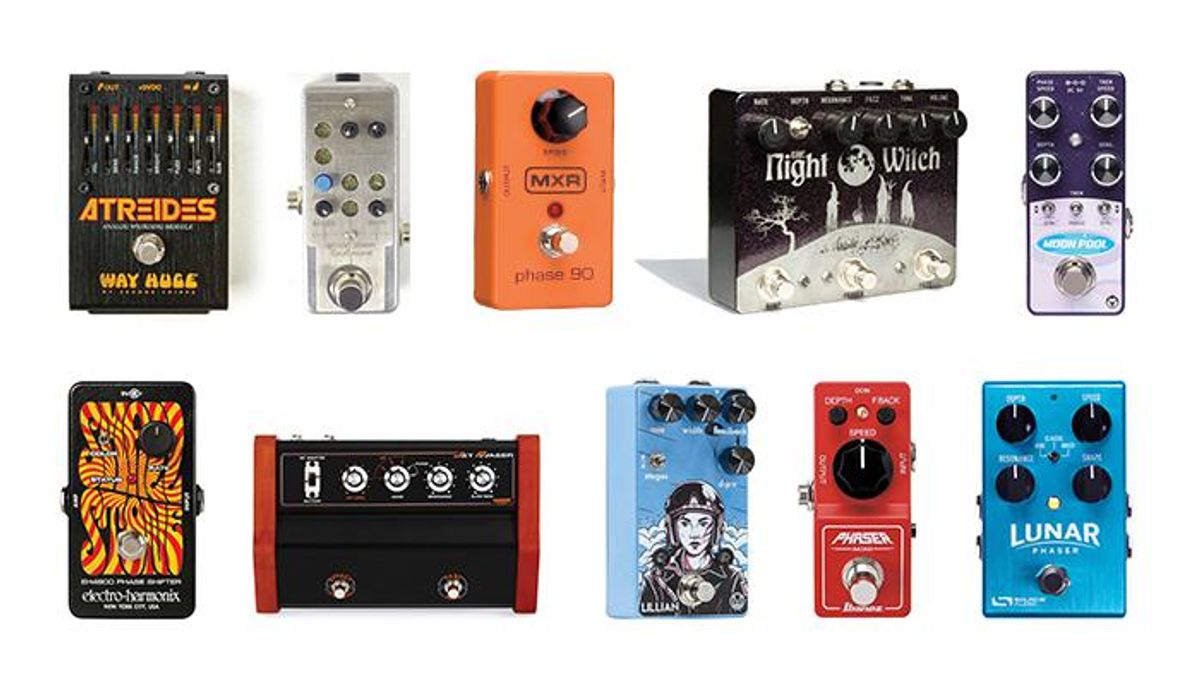 Let the warped side of your creativity erupt with a phaser's magic modulation.

It's synonymous with the likes of Gilmour, Hendrix, and Van Halen—to name just a few. The addition of a phaser to a 'board is almost guaranteed to step up one's game in the hypnotic tone department. Here, we've gathered 10 phaser pedals for subtle to space-age modulation experimentation.

IBANEZ
Phaser MINI
Offering a variety of sounds, from subtle texture to deep saturation, this analog Phaser was dreamt up to retain the clarity of dry signal, even when set to the highest effect intensity.
$119 street
ibanez.com

PIGTRONIX
Moon Pool
This 4-stage analog phase shifter and tremolo has independent speed controls that change the rate of one or both of the effects in either direction, corresponding to how hard you play.
$179 street
pigtronix.com

MSL
Night Witch
This combo fuzz and ramping phaser is the company's take on the Roland AP-7 Jet Phaser, housing a circuit that's been modified and updated for today's pedalboards.
$300 street
mslpedals.com

WARM AUDIO
Jet Phaser
Boasting the same control set as the like-named original from the '70s, this phaser was created to drum up gentle modulation to distorted phase-drenched cacophony.
$199 street
warmaudio.com

MXR
Phase 90
From delicate, spatial shimmer to full-on high-velocity swooshing, this well-known orange box has been a mainstay for many thanks to its distinctively warm modulation.
$79 street
jimdunlop.com

SVI SOUND
Techno-FA
This mini-sized optical phaser can be switched between 2- and 4-stage phasing, while its four controls (frequency, range, depth, and bright) fine-tune modulation that ranges from vintage to modern shift sounds.
$169 street
svisound.com

ELECTRO-HARMONIX
Small Stone
Whether you're after a rotating speaker effect for blues, adding seasoning to your chicken pickin', or a jet-plane swoosh for metal, this phaser was built for sweeping shifting with liquid transparency.
$71 street
ehx.com

WALRUS AUDIO
Lillian
This multi-stage pedal is packed with a wide array of analog-phaser goodness to dial in, from slight amounts of movement from your dry signal to all sorts of unheard phase/vibrato combinations.
$199 street
walrusaudio.com

From Your Site Articles
Related Articles Around the Web
phasers

10 Acoustic DIs for the Modern Musician