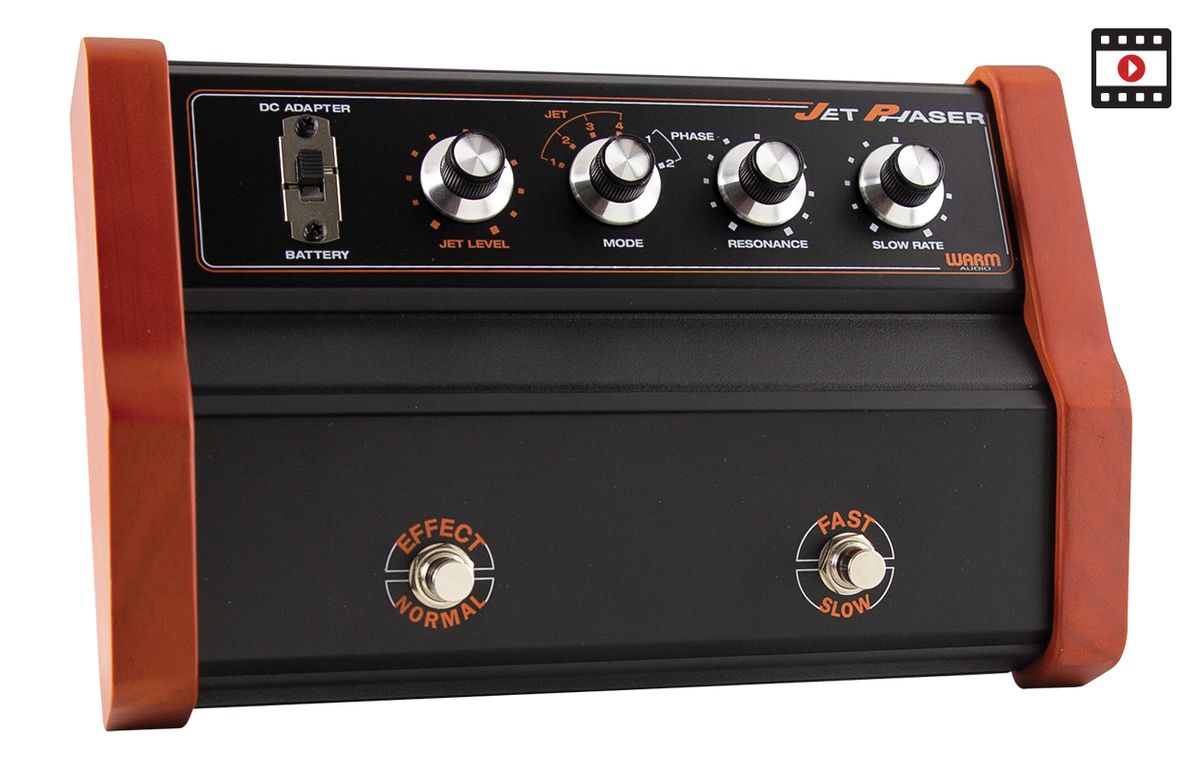 The masters of affordable analog mimicry resurrect one of Roland’s most far-out ’70s effects.

If the Warm Audio name looks familiar but you can’t quite place it, maybe you’ve been hunting for vintage-style studio gear on the cheap. If so, you’ve probably noticed Warm makes many enticing reproductions of classic Neumann microphones, Neve preamps, Urei compressors, and more—all at very accessible prices.

Until recently, Warm Audio’s focus remained in the studio lane. But it seems the company’s affinity for vintage design made the big guitar stompboxes from the 1970s an irresistible target for its resurrection efforts. And apart from a few massive Maestro and Mu-Tron oddities, I can think of few big ’70s pedals more deserving of full-size reproduction than the Roland Jet Phaser—a lovely but nasty fusion of 8-stage, FET-driven phaser and fuzz that Warm has impressively mimicked in its own Jet Phaser.

Woody and Wild
The original Roland Jet Phaser was packaged in a cast-steel enclosure similar to the Boss CE-1 Chorus Ensemble and DM-1 Delay Machine. Warm took some liberties with the Jet Phaser design in this respect, borrowing moves from the Moog playbook by using wood sides to lend a dose of vintage synthesizer style. Otherwise the design is fairly faithful to its inspiration.

Functionally speaking, the Jet Phaser is an odd bird. Modulated fuzzes are more common now—particularly among small, experimental builders—but for the most part, modern players and pedal builders seem to prefer phase and fuzz as independent effects. Here, the fuzz and phase are integrated, save for the two fuzz-less phaser voices.

The controls—which, except for the battery/DC adapter switch, are identical to those on a Roland original—are easy to understand and operate once you acclimate to their operational quirks and idiosyncrasies. The “jet” in the pedal’s name is shorthand for the sound of the combined fuzz and phase effects, and there are four jet modes to explore. Number one is a combination of bright fuzz voice and a less intense phase voice. Number two combines the bright fuzz and a more intense version of the phaser. Modes three and four combine a darker, filtered fuzz with the lighter and powerful phase voices, respectively. The two clean phase modes are mellow and full-strength versions of the phaser.

The jet level knob regulates the output of the combined effects, but it’s important to know that—in true vintage style—most of the knob’s range produces sounds quieter than unity gain. Personally, I find a lot of utility in these textures in studio situations, but to effectively use the Jet Phaser in performance without a signal drop, you’ll likely have keep the jet level close to maximum. The resonance control is sensitive and has great range, which makes fine-tuning the intensity of the phaser voices easy and exponentially expands the palette of available phase colors. It’s also very effective at taming resonant peaks that can occur at certain bright-and-heavy fuzz settings.

The mellower phase voice is especially lovely—adding subtle animation and shimmer at the lowest resonance levels and a classy dose of rotary speaker-style wobble with resonance up high.

The slow rate knob determines modulation rate when the pedal is in slow mode, whereas modulation rate is fixed in fast mode. That limitation is a bit of a bummer, even if it’s vintage-correct. On the other hand, if you use the fast/slow foot switch to toggle between the two modes, the faster speed is an ideal departure or end point for replicating the accelerating/decelerating ramping effects of a Leslie.

Phuzz Sandwich
By itself, the 8-stage phaser produces beautiful, rich modulation tones. Slower rates in particular highlight complex overtones in shifting phases rather than obscuring them in waves of whoosh. And if the Jet Phaser doesn’t produce the deepest, most radical phase tones in the cosmos, it certainly makes some of most detailed. (Some of this extra detail may be down to the 18V power.)

The mellower phase voice is especially lovely—adding subtle animation and shimmer at the lowest resonance levels and a classy dose of rotary speaker-style wobble with resonance up high. But the phaser’s capacity for detail and overtones shines in the more intense mode, too, and it’s fun and rewarding to carve out and highlight specific resonant frequencies in this very colorful mode with the resonance control.

It’s possible that the original Roland designers made the phaser relatively subdued to accommodate the fuzz—which isn’t even vaguely subdued. It’s not an easy voice to pinpoint relative to other common fuzzes. There is some of a Big Muff’s mass, particularly in the midrange, but there is also a great deal of a Tone Bender’s focus. And depending on where you situate the resonance control, you can dial in many variations on filtered, cocked-wah tones, and buzzier, more feral Bosstone and Fuzzrite sounds.

I liked the harmonically excited bright voices best, but there are many amazing smoky and mysterious sounds to be found in the darker, filtered jet modes, too—particularly when you use guitar volume and tone attenuation with the resonance control to sculpt niches in the lows and low mids. Add de-tuned strings and you can create massive waves of low-end modulation that sound weighty and surreal when situated right in a mix.

The Verdict
Warm Audio’s commitment to authenticity means the Jet Phaser suffers some of the practical shortcomings of its inspiration—big footprint, relatively low output from the fuzz, and the inability to use the excellent fuzz in isolation from the phaser. Then again, Warm’s take on the Jet Phaser is a reminder of how unique and just plain good two effects can sound when tailored to suit each other’s respective strengths. For those who can get past its period-correct quirks, the Warm Jet Phaser will reward with complex, tasteful, and downright mental waves of phase.