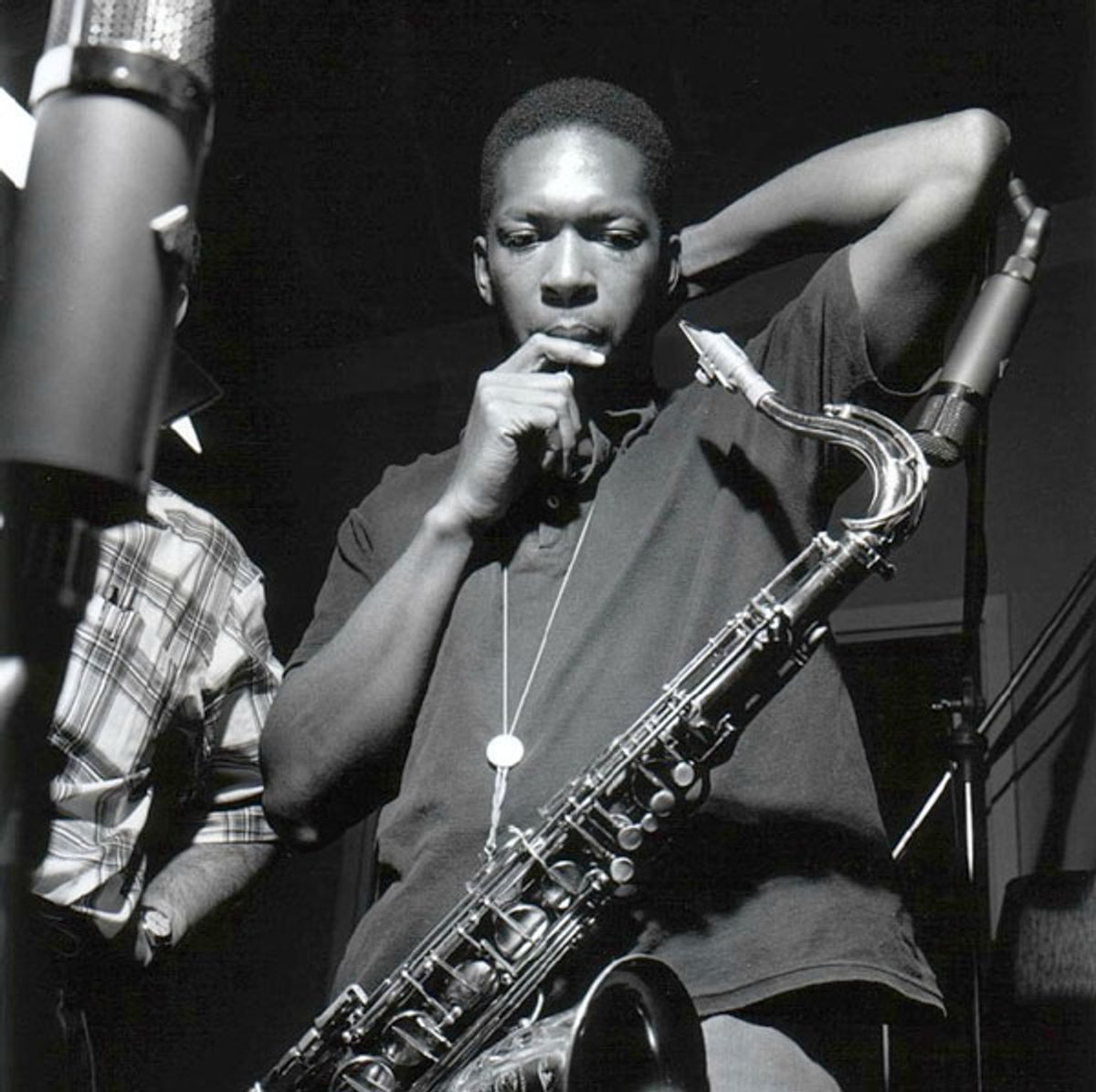 Guitarists can learn a lot by dissecting the art of articulation.

John Coltrane was a titan of jazz saxophone and an improvisor of unparalleled genius. Every jazz musician since has had to confront his instrumental prowess and musical legacy. In this lesson, we’ll relate elements of his improvisational material to the guitar. His note choices are frequently addressed and much of his music is available in transcriptions, but authentic phrasing is not often attempted by guitarists. After all, jazz isn’t just about what you say, it’s how you say it.

Before we dig into the nuts and bolts of this lesson, let’s listen to few essential Coltrane tracks to get our ears right. First, we have his classic tour-de-force, “Giant Steps.” For decades this has been the pinnacle of how to play over fast-moving changes.

On the complete opposite side of the harmonic spectrum is “Impressions,” which is a contrafact based on Miles Davis’ “So What.” Here’s a live performance of the two-chord tune with his classic quartet.

One of the most crucial aspects of Coltrane’s articulation is the slurring of upbeat notes to downbeat notes. For guitarists, this means that we pick notes on the “ands” and hammer on, pull-off, or slide to notes on the downbeats. Pro: This gives the music an undeniable jazz feel and convincing phrasing. Con: Fingerings can be challenging and unorthodox.

Let’s begin with Ex. 1, a I-VIm–IIm–V7 line in Bb, like we’d hear in “Rhythm” changes. This particular lick has typical bebop-type chromatic approach tones. As luck would have it, this lick fits well on the guitar, so it’s a good introduction to Coltrane’s articulation technique.

Here’s another line in Bb (Ex. 2), this one necessitates moving around the neck a bit more to make the articulations work. Again, we hear bebop language, but the superimposed Gb triad (Gb–Bb–Db) on top of the F7 chord is a Coltrane-esque development.

One of Coltrane’s notable developments was his harmonically adventurous series of substitutions that have become known as “Coltrane” changes. You hear this harmonic gauntlet on tunes such as “Countdown,” “Giant Steps,” and a few other standards that Coltrane would reharmonize. The tempos are fast, and the changes are relentless. Ex. 5 covers three somewhat distant key centers: B, Eb, and G in a matter of a few measures.

Coltrane used a combination of bebop language and purely diatonic patterns to navigate these progressions. We hear use of the infamous 1–2–3–5 patterns on many chords as well as simple triadic lines. This is the first example where it’s impractical to adapt Coltrane’s articulation to the guitar consistently.

Ex. 6 is another lick you can use in a “Giant Steps” setting. Again, we do the best we can at capturing the Coltrane spirit without going totally crazy trying get every slur.

Coltrane’s modal playing is legendarily epic. He went on extended explorations the likes of which were never heard before in jazz or Western music. Ex. 7 has a Dorian flavor, but Coltrane is not one to be strictly limited to the mode, so notice the use of b7 and natural 7 (C and C#) in this lick.

Ex. 8 is representative of Coltrane’s development of gestural ideas—in this case a rising arpeggio-like idea that begins on an upbeat. Listen to his early ’60s live work, where his solos could last ten minutes or more.

Here’s a particularly stretchy idea (Ex. 9), but if you keep your fretting-hand thumb low on the neck, it will allow your hand to “open-up" to the extended reach that’s required. The ending is interesting because it has a hint of bebop approach tones in an otherwise modal setting.

If you listen carefully to Coltrane’s improvisations on a C minor blues, you’ll hear that he doesn’t treat the tonic chord modally, i.e., as a minor 7 chord—at least not exclusively. Instead, he thinks of it as a more tonal sound: Cm, Cm6, or Cm6/9. That accounts for his many melodic minor-based ideas in “Mr. P.C.” for example. (As is typical in jazz, melodic minor is used in its ascending form, often called the “jazz minor.”) To achieve a consistent articulation and match his phrasing, we can employ a rather guitaristic move down the neck here (Ex. 10).

Of course, this is hardly a complete overview of Coltrane’s contributions to the language of jazz improvisation. Above all, deep listening is a required step in the process. Once you get the sound of Coltrane’s articulations in your ear it will be much easier to get that sound out of your hands.