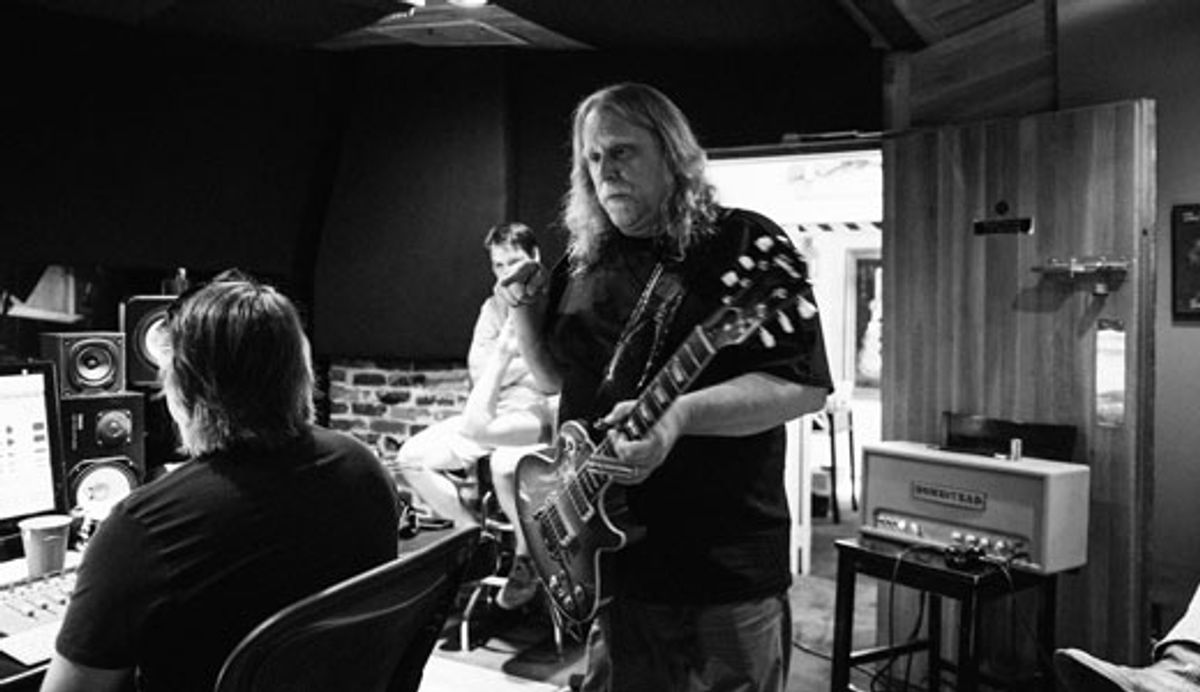 If you hang out with creative people, life can be one big art project.

During a few low points, my personal life could best be described as a carnival of phuckupery. Luckily for me, when life goes to shit, I take the shit show on the road, where I can effectively run from my problems while earning a living playing music with friends (#tourlife).

Around two years ago, during a particularly fubar phase, I was perhaps over self-medicating in the early evening prior to a show when a sober and concerned friend/coworker asked, “You alright?"

I replied, “I can't get high enough to get over her," then stumbled toward the stage to play sad pedal steel alone in the dark before doors opened.

Luckily, I made that clever remark in front of three wildly talented songwriters: Lee Brice, Jon Stone, and Billy Montana, who recognize a solid hook when they hear it. (And have walls full of No. 1 plaques in their trophy rooms to prove it). They jumped on that hook like a puppy on a hotdog that rolled off your plate at a picnic. Roughly 30 minutes later, Lee texted me: “Come to the bus. We're writing your hook."

By the time I climbed the steps of that Prevost, these three had written a killer chorus, which is the songwriter's equivalent of hitting the Powerball. The facts are, if you have an infectious groove/chorus and you're writing with a multiplatinum artist/hit songwriter, you're probably going to have a solid song that could earn you some dough re mi ($)!

After playing the chorus, somebody asked, “What do you think for the verse?" Although still a tad wobbly legged and low-eyed, I came up with a little melody and began singing what I was feeling over the groove.

As a songwriter, I was thrilled, because now I knew this song was going to make the album, but as a guitarist I was humbled by Warren Haynes' genius.

Lee immediately followed my start with the next three lines, which finished the verse and lead us back to the chorus.

Second verse went much like the first. Bemoaning my current state and missing my happy-go-lucky past, I sang, “I was the life of the party…" My co-writers finished the thought and the song was done. With a bass, a few guitars, and somebody slapping out a groove on a couch, we played it down as Lee tweaked the melody until he had it where he wanted it. Once it felt right, a few of us pulled out our phones, hit record on a voice memo app, and recorded the only demo the song ever had.

About a year later, Lee texted, “Come over to the studio. I'm recording 'I Don't Smoke.'" When I walked in, my fellow members of Lee's band, the Love Cannons, were running it down and making notes on their charts. Co-writer Jon Stone and I got in the vocal booth next to the booth where Lee was singing and playing acoustic. Jon and I quickly came up with our BGV parts and they “rolled tape." It's been a while, so I can't remember how many takes we did, but it couldn't have been more than two or three. It may have been one. Details remain a bit foggy.

Skip ahead five months: We had four days off during the middle of a West Coast tour, so we hung in Bend, Oregon, renting a big house on the Deschutes River. After a day of kayaking, we brought the mobile recording rig into a huge yoga/Zen room on the second floor with a wall of windows overlooking the river and the Cascade Mountains in the background. Lee opened up the Pro Tools session of “I Don't Smoke" and had me lay down a few guitar solos as well as the pedal steel on a few other songs for what would become his current album. I thought my “Don't Smoke" part was pretty cool until our guitarist, Travis Bettis, played his solos, which I liked better. I was beginning to think this song might make the album.

Jump ahead another four months: We're sitting on Lee's bus after a gig. Lee says, “Listen to this," as he presses play on a Pro Tools session. “I Don't Smoke" had been taken to a whole new level when Lee enlisted his buddy Warren Haynes to do his thing with a Les Paul and a Coricidin bottle. Haynes' part was the perfect approach. As a songwriter, I was thrilled, because now I knew this song was going to make the album, but as a guitarist I was humbled by Haynes' genius.

The final arrangement had been further ramped up with the addition of a soul-drenched female gospel trio that took it to church. It was the kind of part that, once you hear it, you can't imagine the song without it.

The album, Lee Brice, with the song “I Don't Smoke" came out November 3 and can be purchased any place that sells music. I stand to earn around two cents per sale, so if a million of you could please buy this song today, I'm buying a bargain '57 goldtop as soon as my BMI check comes in. Any money left over will be wasted on food and shelter.

The takeaway: There's magical power in collaboration. Hang around creative people and keep your mind open, and you'll find that life is one big art project.