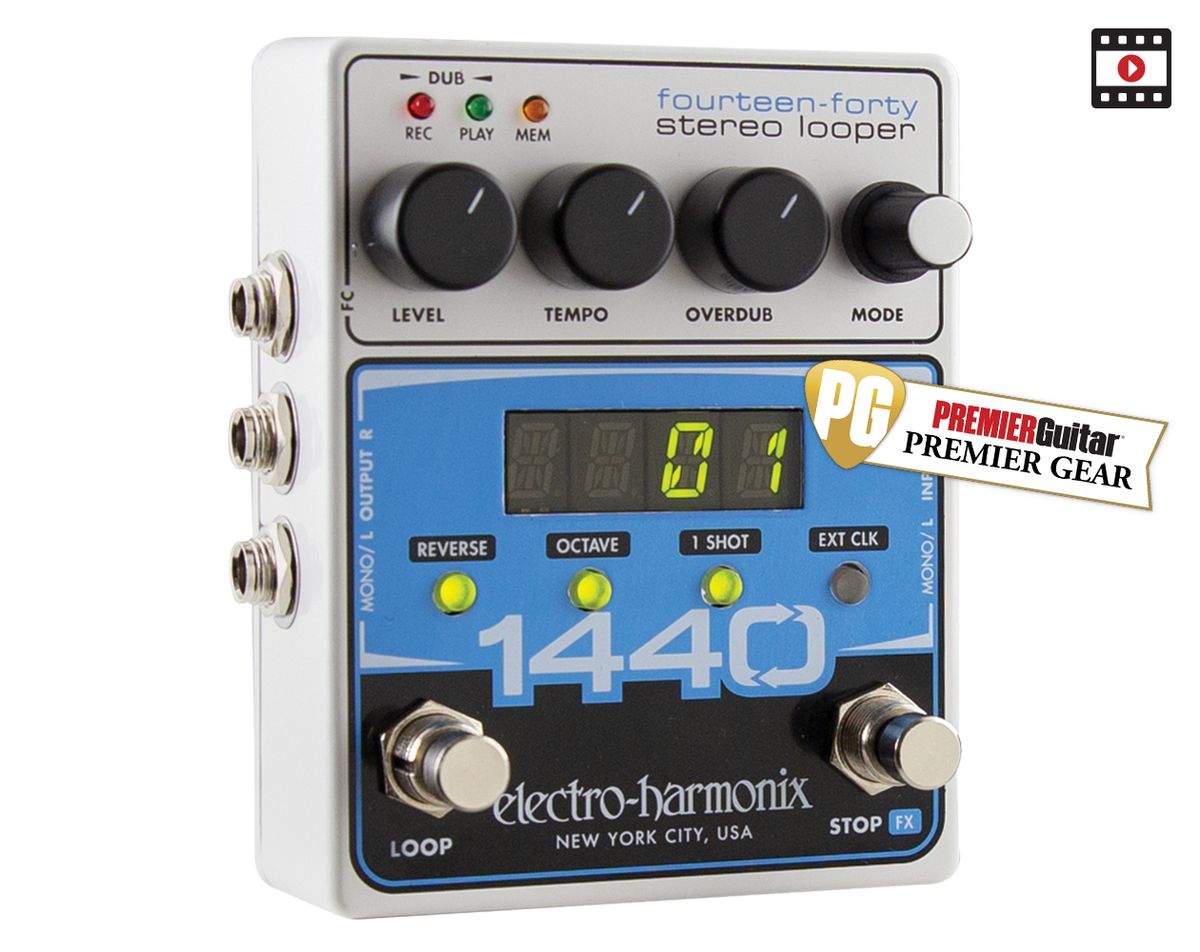 The middle kid in EHX’s expansive family of loopers inhabits a sweet spot between deep functionality and accessible, intuitive operation.

Looping is one of the best ways to transform guitar playing into meditation. Sure, certain looping styles can test your focus, improvisational and compositional skill, and sense of precision and timing. But looping can also be utterly mindless and abstract—a tabula rasa that lets your last thought and musical impulse guide your next in an endlessly blooming musical Mandelbrot set. A state of pure creative flow. I've written a few of my favorite songs using loopers in this way, and it always feels magical in the moment.

EHX's 1440 Stereo Looper excels at instigating that kind of intuitive layering. And it compounds the fun of those basic processes with reverse and variable tempo playback that can transform simple loops into wildly unique sound webs and radical pitch-shift collages. But it also enables the precise, rhythmically driven layering and composition techniques that hardcore loop scientists dig. There are simpler loopers, and certainly more complex ones, but the compact 1440 inhabits a sweet spot between those worlds—a distinction that adds up to a lot of creative upside.

Designed to Streamline
The 1440 is part of what's grown into a very comprehensive family of EHX loopers. As with its cousins, the simpler 360 and 720, and the much more complex 22500 and 45000, the name alludes to the pedal's maximum loop length. And at 1440 seconds—or up to 24 minutes—there's a load of looping time to work with.

The 1440 also has the capacity to store up to 20 loops, as well as goodies like unlimited overdubbing, variable fadeout length, stereo I/Os, tempo sync to MIDI, and a downloadable loop manager app (for Mac and Windows) that enables you to store loops or export audio to the 1440. There's enough to know (and enough ways to get into trouble) to make a thorough read of the manual worthwhile. But as deep as the features can seem, the 1440's streamlined control interface does an excellent job of keeping these features a touch or two away, rather than buried beneath layers of menus and complex click patterns.

Even the downloadable loop manager, which you access via a USB connection to your computer, is a breeze to use. It has a simple, graphic interface that enables you to drag audio files to and from virtual “slots" that correspond to the 20 banks on the pedal. It's also a fast way to move a loop to your recording software if you want to use the loop as a basis for a project.

Simple to Spun Out
Electro-Harmonix's efforts at making the 1440 navigable and accessible translate to confidence when using it in performance and facilitates experimentation. A lot of that ease is down to the logical layout and flow of the 10 controls.

The 1440's streamlined control interface does an excellent job of keeping these features a touch away, rather than buried beneath layers of menus and complex click patterns.

The tempo switch opens up possibilities for surreal multi-tracking effects. It can be set for bpm-regulated adjustments (fine mode) or for half-step adjustments (coarse mode). Whether you chase precise subdivisions of tempo and pitch or stranger manipulations of those parameters, the possibilities are endless. You can increase tempo to pitch up a loop, play along, and then pitch down again to turn your previous loop into bass or baritone accompaniment. The same process can be used to achieve even weirder, smeared-and-bleary sub-bass washes. Really experimental improvisers will love the way you can record loops at super-disparate tempos, alter those tempos, then reverse them to create woozy swirls reminiscent of the Beatles musique-concréte and tape-loop experiments. Add ethereal reverb and delay to these types of loops and the effect can be mesmerizing, creating unusual beds and textures for longform ambient pieces, particularly when you stack long, spare loops.

These types of pieces, as well as tighter, more conventionally arranged fare, can also be further shaped with the overdub knob, which, depending on where you set it, will reduce the volume of previously recorded loops—transforming your composition into an evolving, fractal piece where previously recorded parts recede into the distance as if you're gliding down a river of sound.

Reverse and octave effects are the two other primary sound-shaping (or warping) functions. For the most part they are easy to use—particularly because you can activate either or both with the small push buttons in the middle of the pedal, or by assigning those functions to the stop switch. Recording a backwards solo, for instance, is as easy as reversing your initial loop, recording a lead passage, and then hitting reverse again. The octave switch is similarly easy to use, and killer for spectacular intros, outros, and demented solo sections when switched in and out judiciously. You can drift too far from home if you use the tempo and octave switches together in a fast-moving performance situation. If you're going for deconstructed psychedelic loop tapestries, these happy accidents can produce magic. But to use them effectively together—which can yield equally weird but more tightly arranged results—you should count on a bit of practice.

The Verdict
The EHX 1440 Stereo Looper is a sound collagist's tool box in a compact 1590-sized enclosure. While we only had space in this review to cover the most prominent features in depth, it's a deep, capable looper with plenty of memory for long-form looping, and a design streamlined enough to facilitate the most pedestrian looping tasks.

It takes a little practice and study to make the most of the 1440, but in general it's very accessible and intuitive. Whether you're trying to reconcile deep looping capabilities with pedalboard-friendly size, or keeping your feature set streamlined, the 1440 represents a very smart middle ground at a nice price. But make no mistake—this pedal is capable of deep, unconventional, and highly experimental, textures if you invest a little time to uncover its secrets.