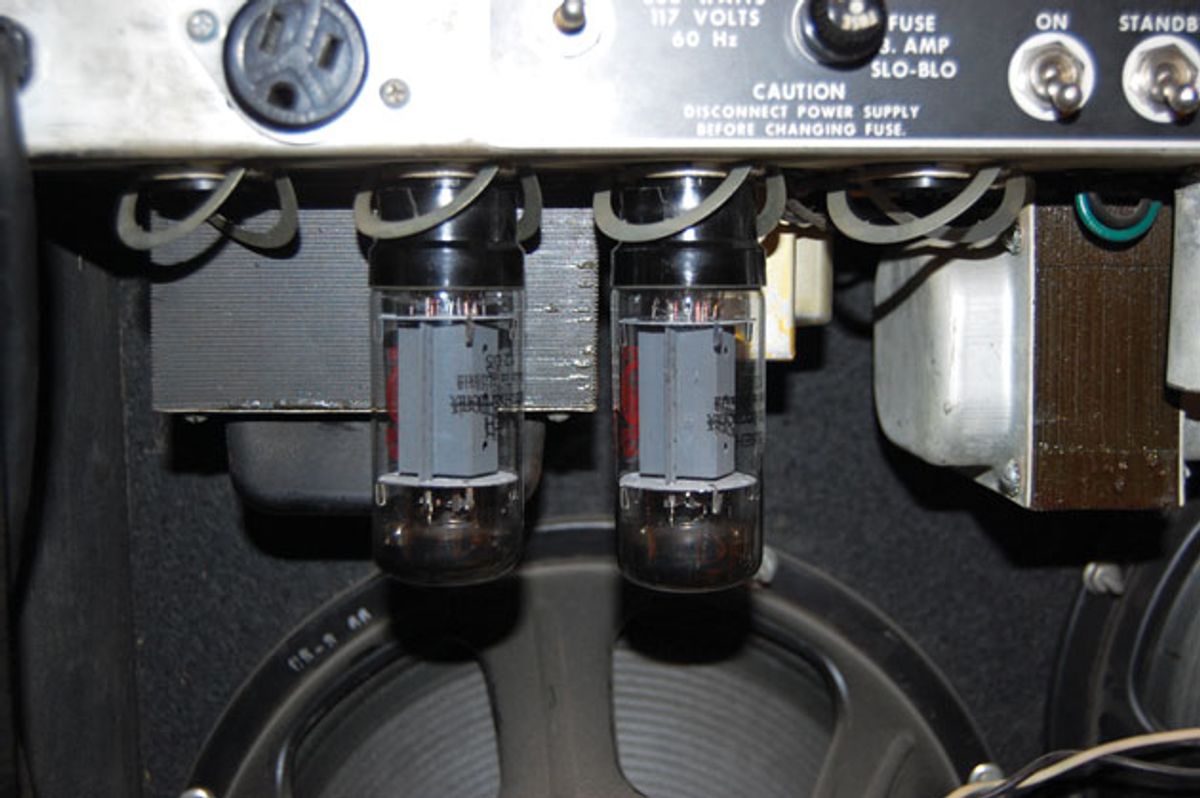 Want to reduce the power in an amp with four output tubes? Here’s how to do it right.

I’ve heard of people pulling one of the two output tubes to reduce the power in a dual-power tube amp. Does this affect the amp’s reliability? Also, if the technique is okay, can you use it on quad output amps like a Fender Twin? And which tubes would you pull? Thanks!

It seems there’s no shortage of players who want to drop the output power of their amplifier. Some may want to drive their amp’s output stage hard to achieve output-tube distortion, while others may simply find their amp has too much power to even use as a clean platform. Sometimes an amp just sounds better, even when playing it clean, if the output tubes are working a bit harder. This will cause the current flow to increase past the idle current, especially in standard-biased class A/B amps. In my opinion, this makes for a better sounding output tube. Whatever your reason, there is a right way and a wrong way to remove output tubes.

But first, in a standard amplifier with only two output tubes, it’s never okay to remove one output tube. While this would certainly reduce the output power of the amp, two things will happen: It will unbalance the primary side load the tubes place on the transformer, and it will leave one side of the primary completely unloaded. The latter could create excessively high voltage in the winding, and thus cause arcing and transformer damage. Bottom line: Do not remove one output tube in a two-output tube amp. There may be exceptions, such as a single-ended output amp with multiple output tubes in parallel, but I’m sure these are few and far between.

Sometimes an amp just sounds better, even when playing it clean, if the output tubes are working a bit harder.

This is more important in Marshall-style amps, as their output transformer design seems to be, or at least is perceived to be, a bit more finicky and vulnerable. Impedance reduction is not an option in amps without impedance selectors, such as early Fender amps, but they seem to be pretty stable and not significantly impacted by this mismatch. In fact, certain amps—such as the Mesa/Boogie Mark Series—feature a “half power” switch that electrically disconnects two output tubes from the output stage with no impedance adjustment and no ill effects.

This tube-removal technique works best in amps that are fixed biased, as opposed to cathode biased. Also, some amps have their output tubes physically arranged in asymmetrical patterns, so consult with the amp manufacturer if possible before removing any tubes. As far as the amp’s reliability, other than the aspects we already addressed, if you occasionally use the amp with all tubes and occasionally with two, consider alternating the tubes you pull so they all wear evenly.

One more point: There are other ways to reduce the volume level of an amp. One is by simply inserting an attenuation device between the amplifier and speaker. THD, Weber, Soldano, Tube Amp Doctor, and other companies make such devices and they function quite well. Another option is to have your tech install a “pentode/triode” switch. This changes the wiring of the output tubes, converting them to a “faux” triode operation. This reduces the amp’s output by approximately 40 percent, which is on par with removing two output tubes.

WARNING: All tube amplifiers contain lethal voltages. The most dangerous voltages are stored in electrolytic capacitors, even after the amp has been unplugged from the wall. Before you touch anything inside the amp chassis, it’s imperative that these capacitors are discharged. If you are unsure of this procedure, consult your local amp tech.