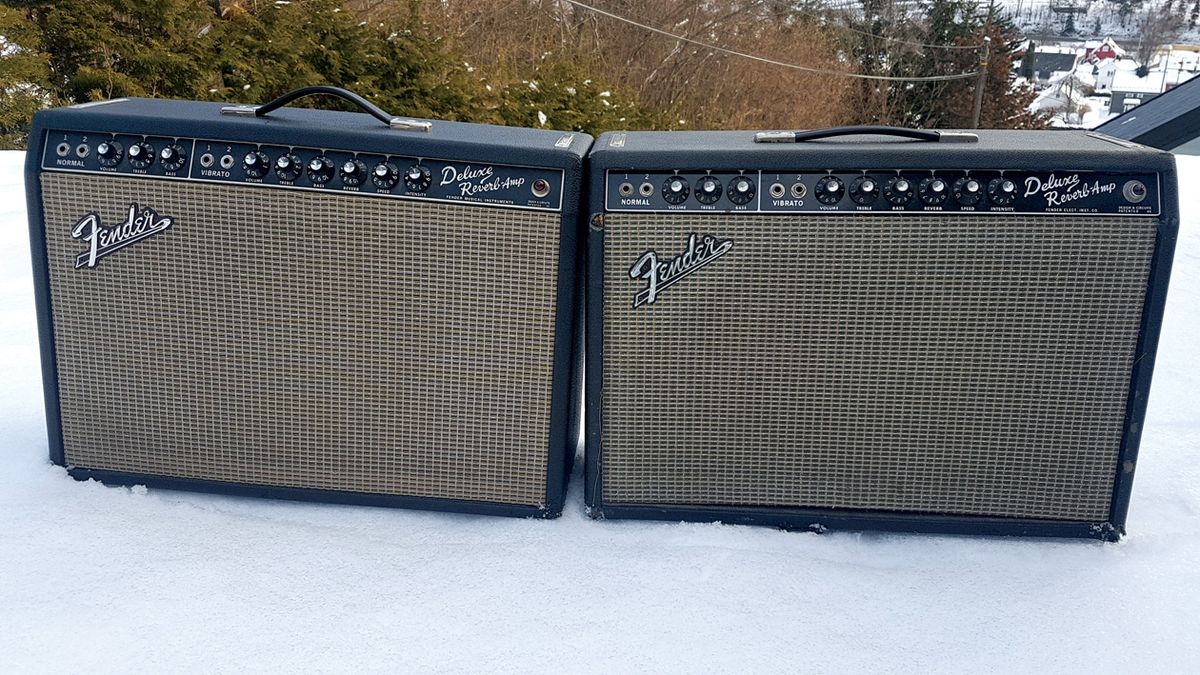 Jens Mosbergvik’s trusty ’66 Deluxe is at left. The Ronstadt band amp—now his main gigging combo—with a much-transformed interior is at right.

How a not-so-special silver-panel amp was transformed into solid gold.

Let me share a tale about a very enjoyable and educational gear purchase. It involves a celebrity-owned vintage Fender amp, and tonal disappointments followed by experimentation. It’s about how I turned a disappointing purchase into what became—and still is—my main gigging amp. Having used this amp on approximately 100 gigs, I’ve really gotten a return for the initial $1,195 investment, not even counting the valuable learning it has given me. So, this is the story of my Linda Ronstadt Deluxe Reverb.

In 2010, I found a vintage Fender amp on eBay that really caught my eye. It was a celebrity-owned ’71 silver-panel Deluxe Reverb with 6L6GCs that had been modded and sported a powerful and heavy JBL D120F speaker. It came with a vintage, blue, road-worn flight case that looked like it had been around the globe a dozen times. The amp circuit had been entirely re-wired to AB763 black-panel specs, with all caps replaced with newer orange drops and about half of the resistors replaced. (I later swapped out the silver control panel to match.) You could see by the component leg twisting, soldering, and cutting that the work was done properly. The plastic wires were even replaced with high quality BF-style cloth-covered wires.

I managed to find satisfying tone only at loud volumes with a Tube Screamer, which removes both the upper treble and lower bass.

The number 13 was sprayed on the blue flight case, and the amp had “Ronstadt 18” sprayed on the its upper and lower back panels, indicating that the amp belonged to a band with a crew that handled the backline equipment. It seemed to have been a working musician’s instrument and had been well looked after. The whole package was promising. After a short bidding round, I ended up paying $1,195 to its owner, an acquaintance of the Linda Ronstadt band.

Six weeks later, the amp arrived safely at my house in a flight case that smelled bad but looked fantastic. I immediately swapped the original 110V power transformer for a Mercury Magnetics 230V version. My first impression was that it sounded firm and mean, with a harsh attack and gritty treble. But it was too sensitive on the treble pot to my liking, and my Jimi Strat with Fender CS69 pickups didn’t sound good thorough it. The tone was cold and shrill at both lower and higher volumes. I wasn’t able to tame it with the EQ knobs on my guitar, pedals, or the amp. It was either too muddy or too bright. Maybe this was the reason the amp was sold? I spent days playing around with it, trying different guitars and pedals. I managed to find satisfying tone only at loud volumes with a Tube Screamer, which removes both the upper treble and lower bass (the SRV trick).

A backside view of the Ronstadt Deluxe Reverb, with its lineage tattooed in white paint.

I wanted more. I wanted to play this amp without a Tube Screamer and find a more balanced tone. There was no point in keeping a bad-sounding celebrity amp. My goal was to make it smoother and warmer, with less attack. I started by disengaging the bright cap on the vibrato channel, which tamed the upper treble and allowed me to turn the treble pot beyond 4. All reissue Deluxe Reverb owners with newer Jensen C12N speakers should try disengaging the bright cap. Second, I installed a mid switch on the back, instead of the no-longer-relevant ground switch. This mid switch acts as a fat boost and selects between the stock 6.8k resistor and a fatter 22k resistor, to offer more mids. Immediately, there were improvements. The added mids pushed the power amp circuitry into more warmth, crunch, and distortion. I could’ve also installed a 25k pot instead of the mid switch, to have endless mid levels to choose from. But simplicity is king. Having only two choices makes life easier.

Some other mods to reduce the clean headroom followed. I inserted a 5U4GB rectifier tube instead of the GZ34, for less attack and more sag and compression, and pulled out the V1 preamp tube to increase the preamp signal level, pushing the preamp and power amp sections harder.

This road case, which arrived in stinky but durable condition, was part of the eBay deal that brought the Deluxe into Jens Mosbergvik’s collection of Fenders.

The results were rewarding! The shrill treble was tamed and my pick attack was smooth and just snappy and responsive enough. The treble was balanced by punchy lower mids, improving the overall EQ balance. Now the amp was more sympathetic and supported more and different kinds of guitars. No boost or overdrive pedal was needed. With these mods, the Deluxe became a perfect player’s amp, and definitely a keeper. A punchy Deluxe Reverb with 6L6s delivers approximately 30 to 35 watts, so can cope with larger stages and settings.

In the ensuing years, I’ve done further experiments with this amp—most significantly inserting a larger 8 ohm output transformer from a Vibroverb, and a power transformer from a Super Reverb, as well as upgrading the big DC and filter caps to support the higher plate voltage. Together with an EVM12L speaker, this amp gave me a superb Stevie Ray Texas Flood tone. Right now, I use an Eminence Maverick speaker with an inbuilt 9 dB attenuator that can turn the volume down to a Princeton Reverb level, while still achieving full tube breakup. Yes, I know. It’s awesome!