Close-Up on a “Perfect” Stratocaster 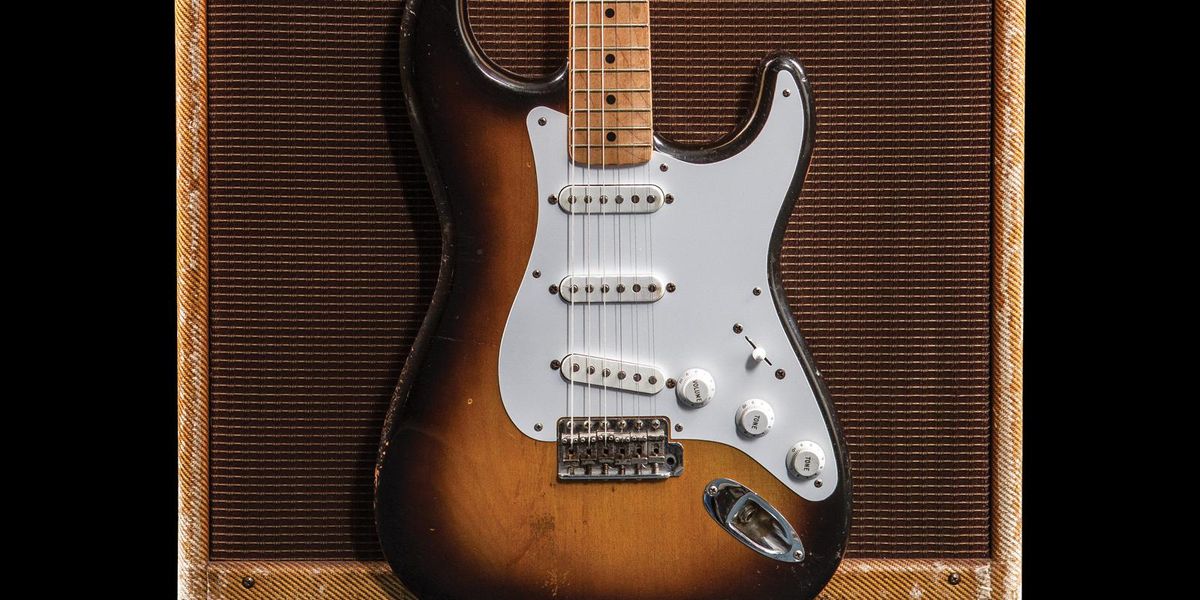 Leo Fender's study in perfection: a 1957 Stratocaster, leaning on a 1955 Bandmaster. To hear the definitive voice of this model-year Strat, listen to Buddy Guy's debut solo album, 1968's A Man and the Blues.

Although the model debuted in 1954, Leo Fender didn't consider his second guitar design complete until '57. Meet that year's serial number 19129.

The Fender Stratocaster was developed with input from players dissatisfied with Leo Fender's first electric guitar, the Telecaster. Their ideas, which included a more comfortable body shape, an adjustable bridge allowing intonation for each individual string, and a vibrato system, were duly adopted, and Fender introduced the legendary Strat in 1954. But Leo didn't consider his second great design "perfected," according to the company's website, until 1957.

Fender's use of parts already in inventory gave this guitar its Bakelite-style pickup covers and dials. Note the slight fractures in the pickup covers, due to the material's brittle nature.

The instrument began to see substantial alterations a year earlier. The body wood, which had been ash, was changed to alder starting after the middle of 1956, due to its better consistency for finishing. The neck profile, which was originally round and clubby, evolved into a distinct V shape. Also by mid-'56, the original round guide for the high E and B strings was changed to a rectangular design known as a butterfly clip. And the control knobs and pickup covers, which were a brittle Bakelite-type material, began receiving more durable plastic, although some production models still sported Bakelite-style dials in early '57.

In keeping with the most historic Fenders, the company logo on this instrument is in spaghetti-style script.

The 1957 Fender Stratocaster pictured this month—serial number 19129—displays the features common to that banner-year model, including a one-piece V-profile maple neck with the spaghetti-style logo on the headstock, single-line Kluson Deluxe tuners (between 1954 and 1957, the tuning machine covers had no "Kluson Deluxe" stamp), a comfort-contoured alder body in a standard two-tone sunburst finish, a single-ply 8-screw white pickguard, and a 3-position pickup selector switch. This particular guitar still has the Bakelite-style pickup covers and knobs, because the Fender company never wasted parts, using what they already had in inventory while transitioning to new appointments.

The dash in front of this guitar's serial number stamp is part of its 1957/'58 lineage.

One master volume located closest to the player's hand controls all the pickups, while separate tone controls are assigned to the neck and middle pickups. The bridge pickup has no tone control, giving that position its full-take-off sound. The neck plate is stamped with a dash (only seen in 1957 and very early '58) in front of the five-digit serial number. The February 1957 list price for a Stratocaster with a vibrato arm was $274.50. The current value is $30,000.

The worn maple neck, scraping on the upper horn, and the condition of the case indicates that this guitar was once a hard-played and well-traveled workhorse.

Behind our Strat is a 1955 Fender Bandmaster amplifier. It has the characteristics shared by most narrow-panel amps made by the company between 1955 and 1960. These include two channels, with each channel having two inputs labeled "mic." and "inst.," two volume controls with the same labeling, treble, bass, and presence dials, and standby and on/off switches, along with a ground switch. The 26-watt amp has two 6L6G power tubes, one 12AY7, and two 12AX7 preamp tubes, along with a 5U4G rectifier. The 21 1/4" x 22 1/2" x 10 1/2" cabinet has three Jensen P10R speakers. The top one has its blue bell-shaped cover removed to allow it to fit in front of the tubes and chassis. The original price for a 1955 Bandmaster was $289.50. The current value for the amp is $8,000.

From Your Site Articles
Related Articles Around the Web
stratocaster

A ’56 Sparkle Jet with Fuel to Burn

A Mongrel ’64 Supro Res-O-Glass with Plenty of Bite