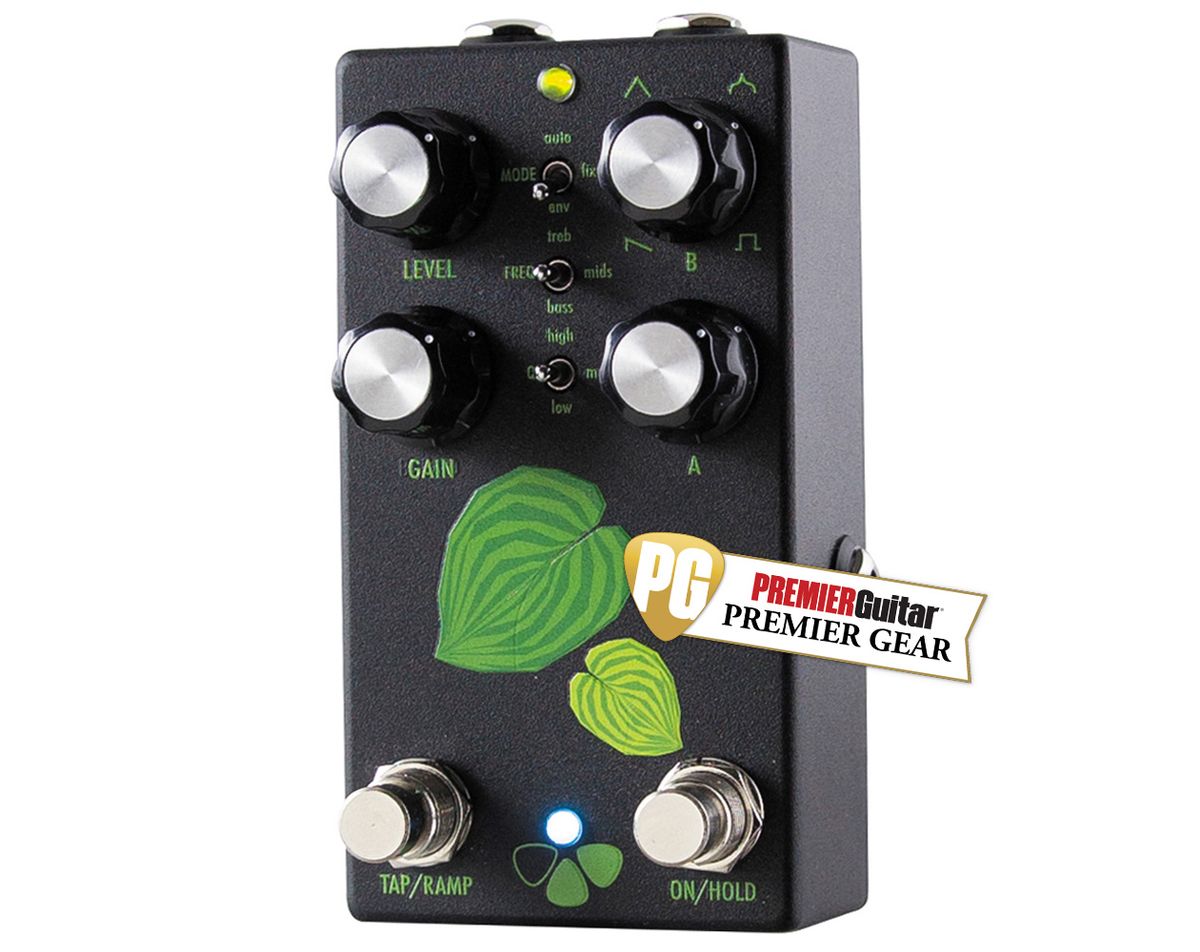 The subject of auto-wah engenders weird reactions among guitarists—ranging from puzzlement to indifference to outright hostility. But, like many things that provoke strong responses, lack of understanding is usually the main driver of skepticism. The guitarists with the most vicious reactions usually assume that an auto-wah does the wah-ing for you and little else—as if an oscillating filter were an affront to Jimi's ghost, or something. So it's fun to imagine a skeptic's surprise should they someday interact with the Flower Pedals Hosta—an analog auto-wah with a digital brain that imaginatively stretches the auto-wah concept with warm wah-pedal-like oscillations, quacky envelope filter effects, and deep “No Quarter"-style LFO modulations.

Freq Your Wah Out
The Hosta is carefully made, with an eye for high-quality components and serviceability. Crack it open and you'll behold a tidy and exacting circuit, with a Fasel inductor (an evolution of the type used in the first Italy-made Vox wahs) looming over the rest of the circuit board. The expression pedal jack, footswitches, and the DC jack are all mounted to the chassis independent of the circuit board. There's no option for 9V battery power.

The thoughtful design motivations behind the Hosta are also apparent in the easy-to-grasp control layout, which is distinguished by logical flow and intuitive feel. Level determines output volume. Gain regulates input level at the wah's first stage (higher levels make the pedal more sensitive, intense, and resonant). The three toggles select between auto-wah, fixed wah, and envelope modes, select between three peak frequency ranges, and select the Q, or resonance and intensity, of the filter sweep.

The essentially warm tone is ballast and counterbalance for the peakier, more resonant output.

These knobs also have secondary functions, including a latch function and selection of the oscillation speeds that bookend the ramp effect. The two footswitches are also dual-purpose units: The right switch bypasses the effect but also enables access to secondary A and B functions. The left footswitch inputs tap-tempo rate, but also activates the ramp function. And while the optional use of an expression pedal (not included) might seem funny to auto-wah skeptics, you can use one to control the LFO speed and set up different fixed wah peaks.

Resonant Freaks
One facet of the Hosta's performance that strikes you straight away is the intrinsic warmth and roundness of its fundamental tones. These inviting base sounds make many extreme sounds more expressive, palatable, and easy to slot in an arrangement or mix. And no matter where you set the Q and frequency toggles in relation to each other, that essentially warm tone is ballast and counterbalance for the peakier, more resonant output.

Players that have only experienced the quackiest, most basic auto wahs are likely to be surprised by the range of tones you can extract by switching the frequency toggle alone. Low frequency emphasis summons a funky, soulful undertone that sounds both burly and bouncy at slower sweep speeds and medium-intensity Q settings. Mid-frequency emphasis brings focus to the output—enabling exploration of high-intensity Q settings and fast, twitching sweeps. High-frequency mode brings out the pedal's more angular and stinging qualities, adding emphatic punctuation to a guitar phrase, or gentle percolating tones.

The Verdict
Surprisingly, there isn't space enough to describe all of Hosta's tones and capabilities in depth. But the pedal—and its recombinant, interactive features—are much deeper in functionality and expressive potential than the economical design suggests. Auto-wah skeptics will probably balk at the steep $279 price. But players that work from a less stodgy mindset will hear how Hosta cleverly and seamlessly ranges from wah to envelope filter to modulation machine—and appreciate the high craft that went into the Hosta's well-executed controls and inviting tones.