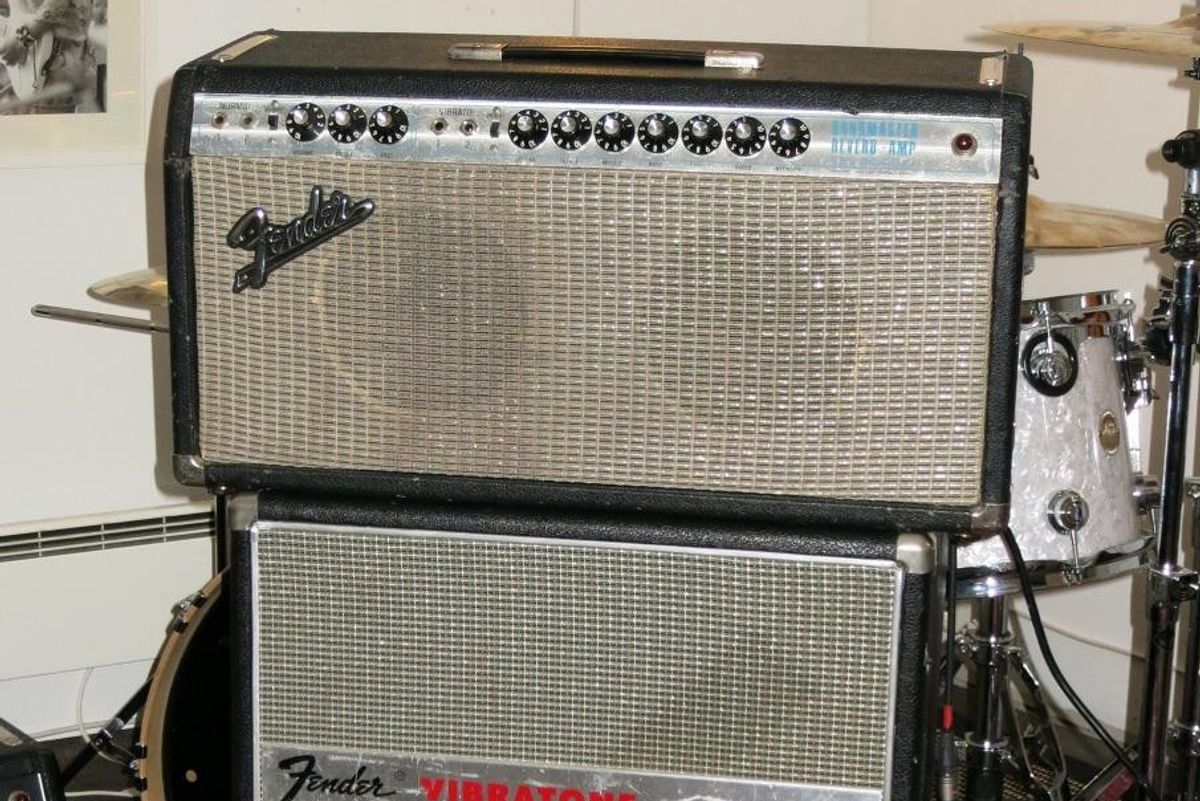 The Bandmaster Reverb head was built from 1968 to 1980 and has enough grille-room to install a pair of 8" speakers—a popular mod.

An introduction to Fender's classic amp heads of the '60s and '70s.

Fender's black-panel piggyback amps are not as widely known as the combos that every guitar player on this planet has either seen, heard, or played. They have lost appeal in a time when practicality and economy are guiding amp selection for most of us. Thanks to PA and monitor solutions, we no longer need big, powerful amps to fill rooms and stages. But, as we know, tone and size are related. So, let's look back at the great Fender piggybacks, from an era before the world needed to be so efficient and compact.

Fender introduced their piggyback amps in the blonde era, in 1960. Before that, during the tweed era, there were only combo amps. The piggybacks were designed to be loud, clean, and have lots of punchy bass from closed cabinets with 12" or 15" speakers. Most have solid-state rectifiers with no sag, and either two or four 6L6GC power tubes producing typically between 50 and 85 watts. They have massive power and output transformers, keeping things firm at high volumes and compatible for use with bass guitars. An exception to all the above is the smaller Tremolux amp, which we'll come back to.

A higher speaker impedance reduces the clean headroom, which is sometimes useful.

An advantage of using separate speaker cabinets is the flexibility to vary tone and volume by pairing amps to the cabinets they were designed for or to any other cabinet, as long as you stay within the safe impedance range: between -50 percent and +100 percent of the amp's rating. There is a huge difference in tone and volume playing a 4-ohm Bandmaster through a small and light cabinet with a modest, vintage-style 10" speaker at 8 ohms versus a closed-back 4x12 at 8 ohms with loud Celestion speakers. Or you may use a bass guitar with a single 15" bass-style cabinet. I encourage you to experiment and learn how to pick the right pairing for the right job. A rule of thumb is to match the amp and cabinet impedance, for the most possible wattage and volume. A higher speaker impedance reduces the clean headroom, which is sometimes useful.

Now, let's discuss the black-panel Tremolux—the only small piggyback amp. It has a normal channel, a vibrato channel, a GZ34 tube rectifier, two 6L6GCs, and lighter transformers, and was originally designed for a 2x10 closed-speaker cabinet. This amp produces a modest 35 watts and breaks up much earlier than its bigger brothers. It is sought by Fender players looking for natural tube distortion.

Moving up the scale, the black-panel Bassman and Bandmaster amps may look similar, but their innards are not. Both are dual-channel amps powered by 6L6GC tubes and diode rectifiers, built for driving 2x12 speaker cabinets. The main differences are that the Bandmaster has tremolo and a smaller, 40-watt-output 125A6A transformer (same as the Vibrolux Reverb). The AB763-circuit Bandmaster's two channels—"Vibrato" and "Normal"—have similar preamp circuits and sound alike. The main difference is that the Bandmaster has tremolo. The circuit design and tone stacks relate very much to the Deluxe, Vibrolux, Super, and Pro combos, with typical sparkling, clean, and scooped black-panel sound.

The black-panel Bassman AB165 is different than other black-panel amps. At low volumes, black-panel Fenders sound clean, but when turned up, the Bassman distorts more because of an extra preamp-tube stage. Its tone is also slightly bigger and firmer than the Bandmaster, because of its larger output transformer. The Bassman's "Bass" channel is voiced for bass guitar, with a deep switch, while the normal channel is voiced for guitar, but without vibrato. I find the black-panel and silver-panel 50-watt Bassman to be a great bass amp, with articulate and strong lower mids that fit well in a band context.

Both the Bandmaster and Bassman continued in the silver-panel era, but with changes. The Bassman's power was first increased to 100 watts with four 6L6GC power tubes. A 70-watt version became available in the late '70s. In 1968, the Bandmaster Reverb was introduced, with a 5U4GB rectifier tube and a smaller 125A6A output transformer (same as the Vibrolux Reverb), both resulting in more sag and reduced clean headroom. The cabinet height grew a few inches to fit the reverb tank. The 4-ohm Bandmaster Reverb is one great, versatile tone platform with reverb, vibrato, and rich EQ possibilities, useful with all kinds of guitars, pedals, and speaker cabinets. If you own a silver-panel Bandmaster Reverb, you might consider getting an amp tech to revert the bias circuit back to black-panel specs, for better bias control.

Finally, the most powerful black-panel piggyback amps are the Showman and Dual Showman, with four 6L6GCs producing 85 watts. They came with single or dual 15" JBL speakers and large output transformers wanting 8- or 4-ohm loads, respectively. Be aware that some Dual Showman amps actually have a 4-ohm output transformer, and sometimes the faceplate says only "Showman." It's also worth echoing that Fender added reverb to the silver-panel version, to create the Dual Showman Reverb. And now, you know the basics of Fender's piggyback gems.