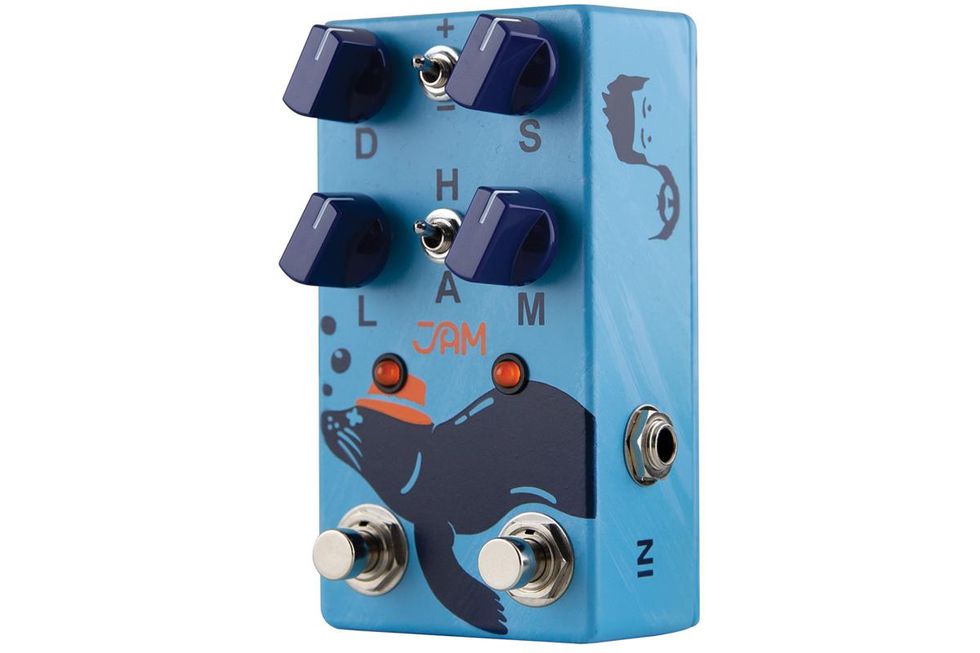 Gently undulating modulation and hard-choppin' tremolo come together in a harmonic trem with copious control options.

Harmonic tremolo deserves its own effect category—perhaps one without "tremolo" in the name at all. Harmonic tremolo (which modulates bass and treble frequencies separately before recombining them to very wobbly ends) and amplitude tremolo, (which attenuates volume at various rates) sound like siblings in many settings. At low effect levels, casual listeners might have trouble discerning a difference.

In more prominent settings, however, harmonic tremolo is audibly more fluid and full of breath. Because there is no volume attenuation, it colors and fills the spaces between modulation peaks while achieving many of the same animating sensations as tremolo. Its essentially less-choppy voice makes it well suited for complex chord voicings and slide. And it also enables you to color your tone with a light touch of phase—an effect that typically reads as pretty heavy handed.

JAM Pedals' Harmonious Monk delves deep into the possibilities of harmonic tremolo textures, with controls that enable extra-fine tuning of rate, intensity, effect mix, output volume, and even the EQ makeup of the modulation. But it's also equipped with a very fine amplitude tremolo mode, which means you don't have to commit to a single tremolo style—or two tremolo pedals. If you like really digging for unusual or specific tremolo textures, you'll love the Harmonious Monk's power to shape them.

JAM designed the Harmonious Monk with input from Dan Steinhardt and Mick Taylor from YouTube's That Pedal Show. Given the collective enthusiasm for pedal minutiae among that crew, it's little wonder that the Monk is built for hyper-precise modulation shaping. The depth, speed, output level, and effects-mix controls each have extensive ranges, are pretty sensitive, and are interactive. When you're just getting to know the pedal—or just into an intuitive, fast-moving workflow—that range and sensitivity can make the controls feel vague and induce option fatigue, particularly when you add in the very cool speed-doubling and LFO intensity switches to the mix. But once you get the feel for a few favorite settings, the extra control can feel as satisfying as a fine-tipped paintbrush.

While the Monk's most classic sounds are luxurious enough to keep you rapt for hours, it can be instructive to explore backwards from its most extreme settings. And many of the sounds that make the Monk extra fun and unique are found there.

The extra control can feel as satisfying as a fine-tipped paintbrush.

Super-low modulation rates mated to the more intense LFO and heavy depth settings yield hypnotic phase variations that strike a perfect balance between presence and mystery at lower mix levels. You can further soften the pulse of these slow modulations by adding gain from the output level, which very seamlessly compresses the peakiest parts of the modulation wave and conjures some of the pedal's most cohesive and swirlingly heavy sounds.

The Monk's most vintage-hued and user-friendly sounds are generally situated with the depth and speed somewhere between 10 and 2 o'clock. These modulations most effectively realize harmonic tremolo's lovely capacity for bridging the heartbeat pulse of bias and optical tremolo and the doppler-ish swirl of a rotary speaker or phaser. They are silky, complex, and a joy to get lost in. But the mix, output level gain, and LFO intensity switch invite and enable many hip variations on these sounds. Here, too, the gain from the level control has a beautiful compressing effect that makes the modulation waves more elastic and cohesive.

The Monk's amplitude tremolo is beautiful as well. Nuances like finger vibrato and pitch bends shine more clearly through these modulations. And the hard pulses you can create with heavy mix and depth settings can generate thumping rhythm hooks if you have a steady strumming hand. There's also many familiar black-panel Fender-style tremolo textures on tap when a song calls for more straight-ahead and streamlined modulation.

Both tremolos, by the way, benefit enormously from the Monk's three internal trim pots, with which you can regulate treble, mid, and bass EQ settings. Heavy bass settings, in particular, can really change the feel of the modulation—yielding super-deep pulses than can be used creatively in song arrangement and mixing.

The Monk excels at the kind of subtle modulation that can near-subliminally animate and enliven simple and complex guitar phrases alike. But it can also create intense undulating textures that can completely re-cast a dull riff into a song-defining hook. The sensitive controls—and the extent to which they sometimes seem to overlap in function—can lead you down rabbit holes. Generally, though, the pedal's depth of control is an asset that makes the Harmonious Monk a potentially invaluable performance, studio, and songwriting tool.

From Your Site Articles
Related Articles Around the Web
jam pedals