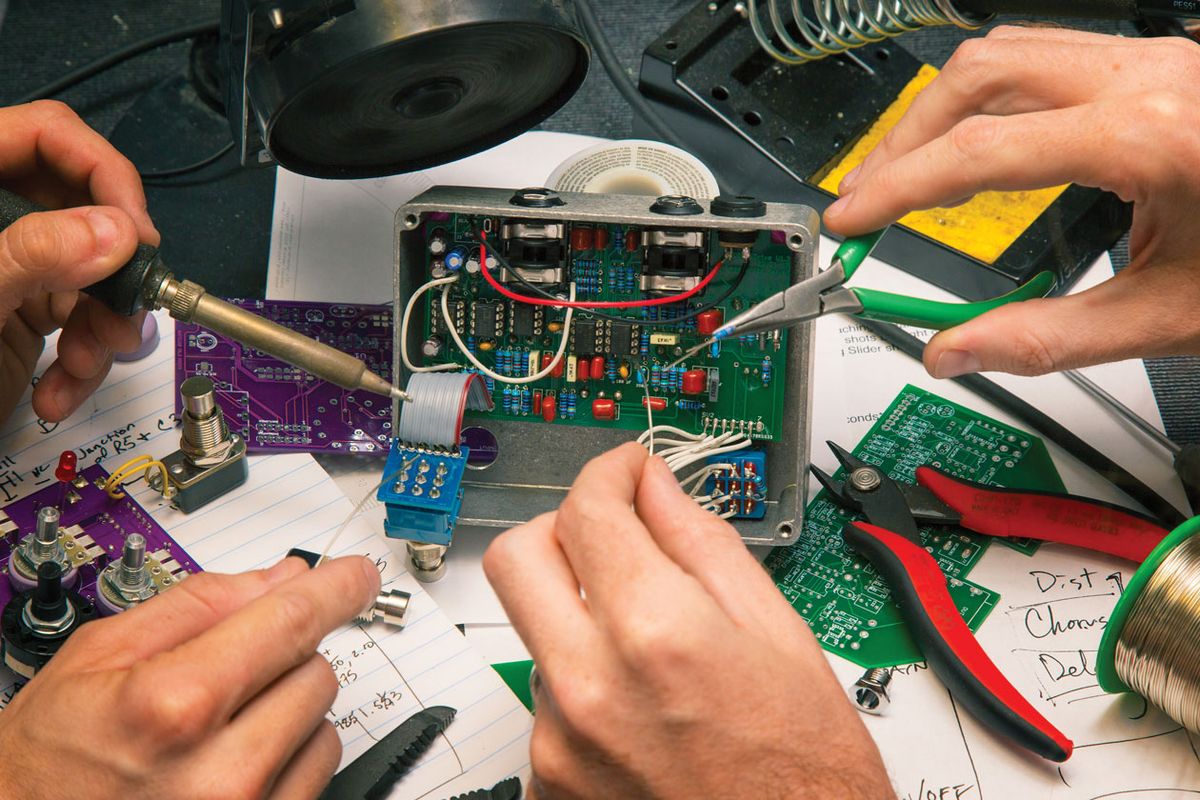 Many hands, many minds—the strategy for developing the best ideas comes from a plethora of influences and sources.

Let’s start broad—the macro before the micro. Every few months, we at Old Blood Noise Endeavors are faced with the question, “What’s next?” More often than not, we have no idea. As it turns out, we don’t have some ingeniously calculated release strategy to grow our brand to the size of a pedal manufacturing behemoth. Instead, what happens is we tend to make moves when inspiration leads us to do so.

Where does inspiration come from? Where do new ideas come from? Once you’re in the grind, how do you escape the mundane to make room for something new? For creative pursuits from painting, music, or writing to business strategy, marketing schemes, and product development, how do the good ideas emerge? I’ll tell you up front: I don’t have a definitive answer for those questions. I only have my best guess and the reassurance that it’s an issue I think about nonstop. Even in writing these words, I see the irony of them as they relate to this article—which needs a good idea from somewhere to take form and develop.

So … this is where we start: letting the outside in. My gut tells me that any good idea I’ve had didn’t come from me at all, but was rather an accumulation of external stimuli mixed together and processed over time, waiting to be applied to favorable circumstances. Specific Old Blood Noise Endeavors pedals, for example, derive their sound and their purpose from a mixture of whatever movie genre we’ve collectively been zoning in on and whatever sound we think mimics the voice of that genre. (The Alien films have been a big inspiration.) In a way, we intentionally make pedals to make noises for film or other visual representations. It’s one part of the whole, not really the end product. And the ideas for the sounds all come from our interpretation of things we’ve seen and heard.

Any good idea I’ve had didn’t come from me at all, but was rather an accumulation of external stimuli mixed together and
processed over time.

While listening to a new album, how often to do you hear something and have no idea how that sound was created? It probably doesn’t happen often enough, but Old Blood exists for those moments. “That sound, right there. How do we make that sound in the simplest consumable form?” Sometimes all it takes is that little spark to get it going—and the pursuit of the completion of an always-ongoing idea, rather than the pursuit of a new idea, is underway.

I almost always feel stuck until the very moment I don’t. The action of getting unstuck is usually out of my hands, although I’m always laboring to get there. It takes some outside force to make your mind move forward. At Old Blood, we spend an ample amount of time bouncing ideas off each other. That practice of collaboration and encouraging input into ideas and projects is often the difference between a finished product that we love and something that we’d rather hide from the world. And more and more, the collaborative process, specifically for pedal development, has been bridging the gap between companies. Behind the scenes, countless conversations go on between peers about new products and ideas, sometimes allowing a friendly competitor to weigh in with the details that make a better product. And sometimes that conversation and result isn’t behind the scenes at all. Over the past few years, guitar and pedal companies have joined together to create products that are made better and more complete by the various sources of the input that goes into making them a reality.

I think that’s great. I’m onboard for something new and unique, no matter how many collaborators it may take and whoever they might be. That type of openness towards new and different perspectives has, in my experience, usually led to something better as a whole—and opens the door to even more collaborations. In my world, rarely is a song or guitar pedal conceived and created entirely by one person. It has taken, and will take, the entire Old Blood team to come up with the best thing we can make—whatever that might be. After all, we’re open to suggestions.