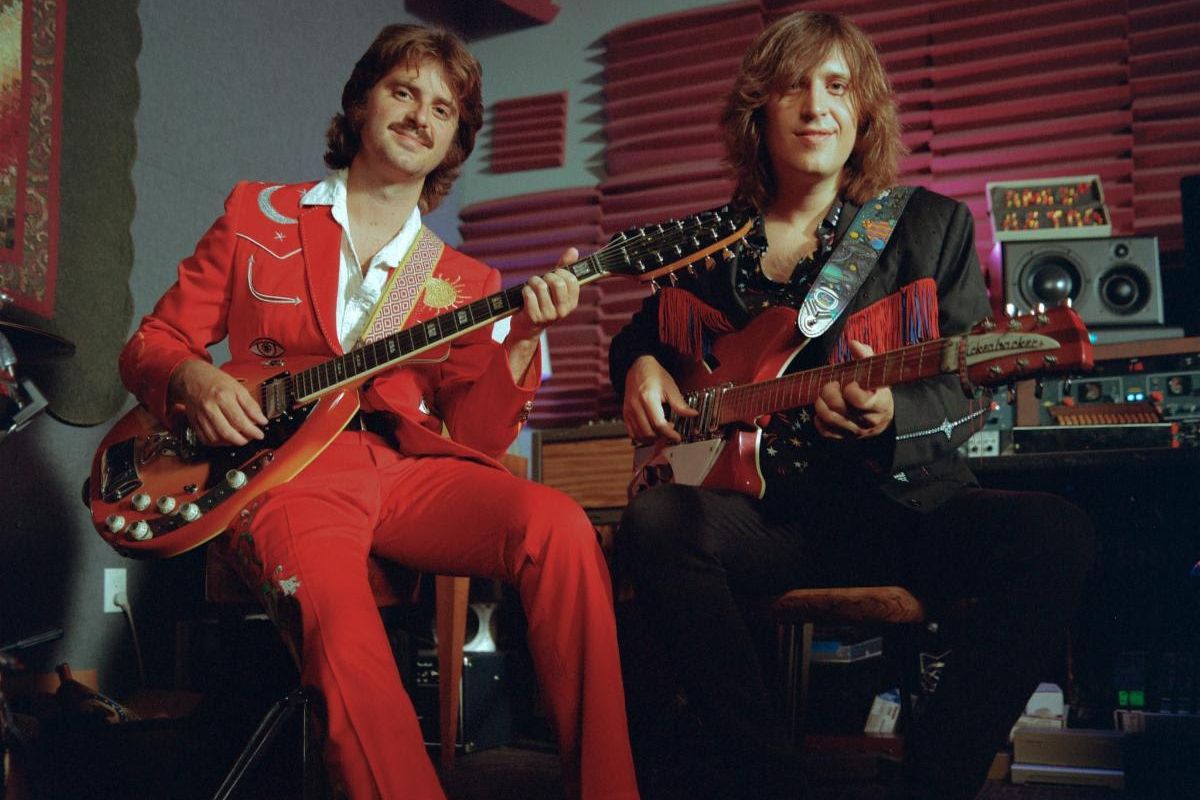 Although the Fogerty brothers share almost all of the guitar and studio gear they've acquired, they both have personal instruments. Tyler's is a Vox Starstream, while Shane, at right, favors his Rickenbacker 370.

From the Everly Brothers to the Beach Boys, sibling harmony is a well-documented phenomenon. The sound created by genetically similar voices resonates in such a special way that it can make even the most callous spine tingle. But what's it called when a pair of brothers tap into some kind of higher frequency that only close siblings can access in order to create a unified vision of guitar playing, songwriting, and production? Whatever it is, Shane and Tyler Fogerty—sons of John Fogerty—have dialed it in.

Under the name Hearty Har, the Fogertys work as a unit, complementing each other in all aspects of their music-making. On their debut album, Radio Astro, the brothers move between roles so seamlessly that it would be virtually impossible to know who is doing what on each of the 11 tracks without following along with the liner notes.

Radio Astro kicks off with the arpeggiated 12-string sparkle of "Radio Man '56," a tune so sunny it can provide your daily dose of vitamin D. The song is a straight-ahead rock 'n' roll jam with a bouncy but driving groove provided by bassist Marcus Högsta and drummer Will Van Santen. Fuzzy guitar leads poke through warm, jangly strumming, enveloped by modular synth bubbles that make the song a swirling sonic rainbow, bound to lift any mood.

If "Radio Man '56" is the brightest song on Radio Astro, closing track "Boogie Man" is the darkest. Its reverb-soaked riffage outlines a minor-key progression drenched with Mellotron and harpsichord pads that make it sound as if recorded by a gang of werewolves at midnight on Friday the 13th. There's so much to take in that it might be the fourth or fifth spin before you notice just how cool the guitar part is, but the detail-oriented listening required of these tunes is definitely part of the fun.

"We just ran off in every direction looking for stuff we liked, and, as it turns out, we like a lot of the stuff that our dad likes, too."—Tyler Fogerty

Elsewhere on the album, the Fogertys prove they've inherited the choogle from their dad, but they always manage to put their own spin on it. Each song seems to open a new bag of tricks and use them to their fullest potential, referencing everything from classic rock to dub and reggae to AM gold. And while the Fogertys used so much drool-worthy vintage gear that it's tempting to talk about the album's throwback vibe, the final product draws from so many eras that it could only exist in the modern one, when every sound and style is on the table.

It's no surprise that Shane and Tyler—29 and 28 years old, respectively—grew up surrounded by music. But while they play with their dad alongside their 19-year-old sister Kelsey as the humorously titled Fogerty's Factory, their formative years were not, in fact, a Creedence Clearwater Revival boot camp. Rather, the two brothers say John and their mom, Julie Fogerty, took a hands-off approach, allowing them to find their own way in music.

Shane says that his elementary school music teacher, Paul Cuneo, "left an impression at an early age that made us want to do music and planted one of the seeds." In sixth and seventh grade, the brothers started taking private piano lessons with Cuneo. After about a year or two studying piano, they got stoked about the guitar, so their parents took them to Guitar Center to pick out instruments. "Tyler was the first one who was interested, and he went and got a B.C. Rich, and I hated it," explains Shane, who picked out a blue Squier Strat.

Tyler sees something fundamental in their choice of guitars and adds, "Knowing nothing about guitars or anything, a B.C. Rich looks way different than anything else in Guitar Center, so I'm gonna go for that one. Now I play the Vox teardrop, so that's kind of the roots of that. It's just a strange-looking guitar."

TIDBIT: Building their own studio helped the Fogerty brothers define the sound of Radio Astro, which includes electric sitar, tanpura, and tubular bells.

The brothers made an earlier album they've now renounced and buried. "It turned out not how we wanted," says Tyler. "After that I was like, 'We gotta figure out a different way to do this. I know that we can do it on our own.'" Shane adds, "We decided, 'Let's try and [record] something ourselves. We really were interested in the recording process—using the studio like an instrument. That was how we transitioned out of the college band into what we are now."

They decided they needed to build a studio of their own, and Tyler cites his decision to buy a console as the tipping point. "One day, I found this console desk that was really massive, and I took a van down [to get it] and it was sticking out of the back with ropes and rusty nails, and everybody was like, 'Why are you getting that?' I was just disillusioned with playing in L.A. at the same places, and I thought, 'Something has to change; something has to be hyper-focused.' I feel like the only thing you can control is the music, so let's build the studio we want to build and be able to do all of the ideas we couldn't do last time. And over the course of five years, it happened."

Like all developing musicians, the Fogertys went through various musical phases. After Shane and Tyler had been playing together in bands for years, Hearty Har began as a way for Tyler to perform some songs he'd written that were inspired by Leonard Cohen as well as the freak-folk scene they discovered while studying at CalArts. The original version of the band's instrumentation included charango, harmonium, and djembe, but they soon electrified, fully embracing rock 'n' roll. Vestiges of their initial wide-eyed aesthetic can still be heard on Radio Astro in their use of electric sitar, tanpura, and tubular bells.

The brothers started out playing riffs from Offspring and Green Day—Shane reminisces about John teaching him how to play "American Idiot"—but soon began digging into the classic-rock canon, and they cite a lot of their father's peers, such as Led Zeppelin and Black Sabbath. While John would help decode sounds on their favorite records, pointing out tidbits about guitar pedals and instruments, they studied with a guitar teacher at school and developed their tastes on their own. Tyler says, "When you let people discover it themselves, they get a deeper love for it, if they're gonna love it. We just ran off in every direction looking for stuff we liked, and, as it turns out, we like a lot of the stuff that our dad likes, too."

Tyler Fogerty digs into his Vox 12-string, one of his pair of favored teardrop guitars, but both brothers also have access to their father's collection of nearly 200 stringed instruments, from Les Pauls to resonators.

The brothers assembled a studio in a room in their parents' house and compiled a deep collection of gear. According to Shane, Tyler was "the main acquirer" and would endlessly seek out deals. They learned to use each piece they added via embarking on their own recordings as well as music for friends such as Guy Blakeslee and Franky Flowers, developing their skills and turning their studio into a well-oiled machine.

"I think it started with keyboards," says Tyler. "There's a lot of records I really like that feature really bizarre sounds, and a lot of them are keyboards. It's all about unique textures and how they can fit and enhance a song." That isn't to say that they haven't spent time building up a guitar collection. While Shane mostly sticks with his 2007 Rickenbacker 370 and Tyler with his Vox Starstream—he plays both 6- and 12-string models with onboard effects rebuilt by AcidFuzz—they share a wealth of amps, effects, and other 6-strings, and, when necessary, can borrow guitars from their dad, whose 1966 Stratocaster made it onto Radio Astro.

Through the process of making Radio Astro, the Fogertys seem to have explored all the sonic possibilities of their studio. "Canyon of the Banshee," the centerpiece, covers serious musical ground and exemplifies how far the brothers can take things. "We were trying to do the spaghetti Western thing, but also to do a little Pink Floyd 'Echoes,' especially in the beginning with the reverse toms and the descending suspended chords," says Shane. He adds, "It was probably the most fun one on the album to make."

Although their enthusiasm for playing live is obvious, the brothers were disillusioned with playing in L.A. at the same places. "I thought, 'Something has to change; something has to be hyper-focused,'" says Tyler. "I feel like the only thing you can control is the music, so let's build the studio."

Now that Radio Astro is finished and released, the Fogertys are already working on new material. In the meantime, they're hanging out with their family and playing music with their dad, which can be seen in YouTube videos shot at John and Julie's house—where Tyler also lives—and in their appearances on The Late Show with Stephen Colbert and NPR's Tiny Desk Concerts.

Hearty Har may be their creative focus, but the music they play with their family holds a special place for both Shane and Tyler. "It's nice to be open and free to express ourselves, be a little more experimental with things and a little more out there, but the family stuff is great. I feel like that's a totally different realm, a different space for my creativity and input," says Shane.

Tyler adds, "It's this special feeling that I don't know if I can describe. I'm just grateful that I can be a part of this. Especially playing with Kelsey, it just seems so natural and happy. Me and Shane have played in bands before and there usually comes a point where somebody who hasn't grown up with a musical life gets nasty or weird and it becomes about something other than the music. Because we've grown up with it. We really treasure it and want to keep it alive."

Hearty Har rip through a rockin' set of tunes live from the Fogertys' home studio, including Radio Astro's "Radio Man '56," "Can't Keep Waiting," and the epic instrumental "Canyon of the Banshee." That's Tyler on the Vox, at left, and Shane wielding a Les Paul.

From Your Site Articles
Related Articles Around the Web
hearty har