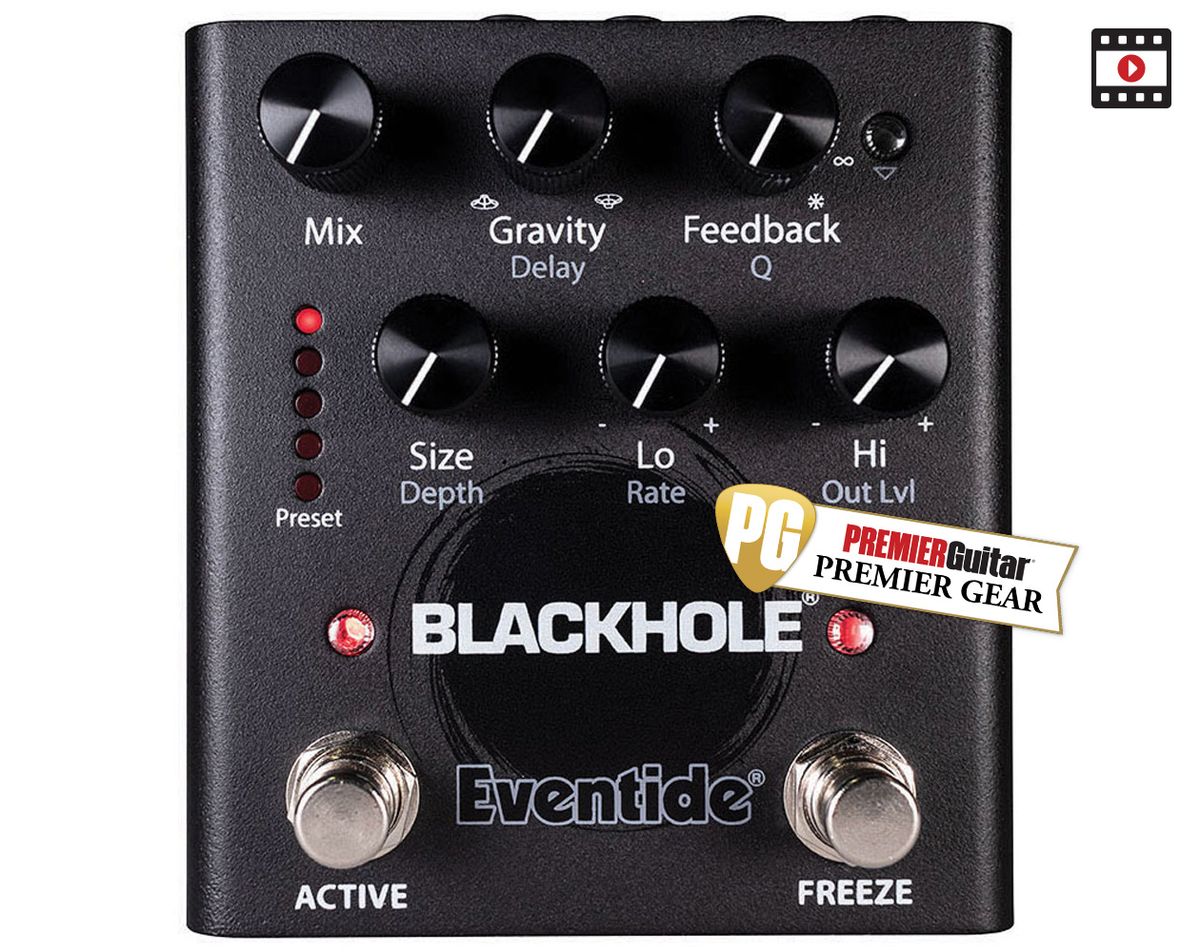 A popular and particularly versatile mode from the Space and H9 processors is now an easy-to-use stompbox all its own.

Reviewing Eventide's Space reverb back in 2011, I was impressed with how many shades of ambience had been stuffed into one box. But I also distinctly remember spending more time in the Blackhole mode than any other. I was happy that the Blackhole settings sounded fantastically, cosmically expansive without relying on some of the more overt “shimmer" tricks that can be a big-reverb cliché. Later, out in the wider world, I started running into engineers that were using the Blackhole mode in the studio and even in live settings to add ambience to mixes.

So the fact that Eventide elected to give the Blackhole a dedicated stompbox of its own is no surprise. What is striking is how functionally streamlined the Blackhole is compared to the Space and H9 processors that are also home to Blackhole-mode sounds. Thanks to a well-conceived control interface, Blackhole isn't much more complicated than, say, a Boss pedal. But it's still very powerful, and its features have been distilled to a functional, practical group that facilitates intuitive, creative experimentation, reveals tremendous textural range, and is easy and super fun to use.

The Heart of the 'Hole
Any player that has messed with the Space—or Eventide's other larger-form stomps—will recognize the basic functionality of the Blackhole's control set. Each knob has two functions, and secondary functions are accessed via a small, LED-illuminated push button at the upper right of the pedal. Most are self-explanatory and common. Others, like “Gravity" (which regulates the level of reverse reverb) and “Q" (which controls the resonance of frequencies emphasized with the EQ ), are less-common reverb functions, but shape the reverb color profoundly. Other practical features include a freeze footswitch, stereo output capabilities, and a guitar/line level switch. You can also save and recall five presets via a sequence of footswitch and push-button maneuvers, though as many as 127 presets are available via midi.

Outer Limits, Dark Corners
Though you can get many pristine, soaring, and seemingly infinite reverb tones from Blackhole, its most appealing attribute might be its ability to generate organic, cloudy, diffuse, and complex ambience. For instance, adding quick delay and using the powerful EQ creatively along with reverse or long feedback settings can yield all kinds of artifacts and reverberative collisions that you may rationally recognize as digital in origin, but which sound deeply mysterious and relatively unpolluted by the hard-clipping, sterile tones, harmonics, and artifacts that make many big digital reverbs sound cheesy.

The Blackhole's most appealing attribute might be its ability to generate organic, cloudy, diffuse, and complex ambience.

My Bloody Valentine fans—especially those who chase the deep, slow-reverse warpage of “To Here Knows When" or “Moon Song"—will find immersive and addictive approximations of Kevin Shields' reverse reverb settings when the gravity is set about half-way to its deepest reverse position, the pre-delay is fast, and the mix is set to aggressive, if not 100 percent, wet mix settings. Even if you aren't a disciple of Shields, you may find a whole new way of relating to your instrument in those modes, and create unexpected sound worlds that can become the foundation for entire songs or melodic hooks.

Reverbs that suggest interstellar expanses and submarine environments are far from the only ones on tap. Smaller size settings, lower feedback, and careful EQ can generate awesome garage-y reverbs that sound a lot like a spring reverb amp recorded to tape and mic'd at a distance in a big, reverberative studio. If I was a engineer aiming for the mood and color of a mid-'60s studio guitar sound rather than perfect spring-reverb-in-an-amp authenticity, I might be inclined to use this setting instead of the finest spring reverb emulation. And though the Blackhole has clearly been optimized for performing players with overflowing pedalboards, it's easy to see the Blackhole finding favor in studio production situations—just as its big brother Space did.

The Verdict
Eventide's Blackhole reverb is a fantastic creative tool. There are reverbs, even within the Eventide family, that deliver more conventional, familiar, and accurate cosmic-scale, shimmer, and cathedral-style reverbs. But while Blackhole can generate many such sounds, its strengths—indeed, its heart—is its capacity for organic, tarnished, dusty, patina'd, reversed, and unfamiliar reverb voices that spur new creative vectors. That it's now available in such a simple, easy-to-navigate, and feature-rich compact stompbox marks a beautiful convergence of adventurous sound design and prosaic concerns for space and convenience. At $279 it's not cheap. But the musical ideas and directions Blackhole can inspire are harder to put a price on.

Be sure to watch our First Look demo of the Eventide Blackhole: