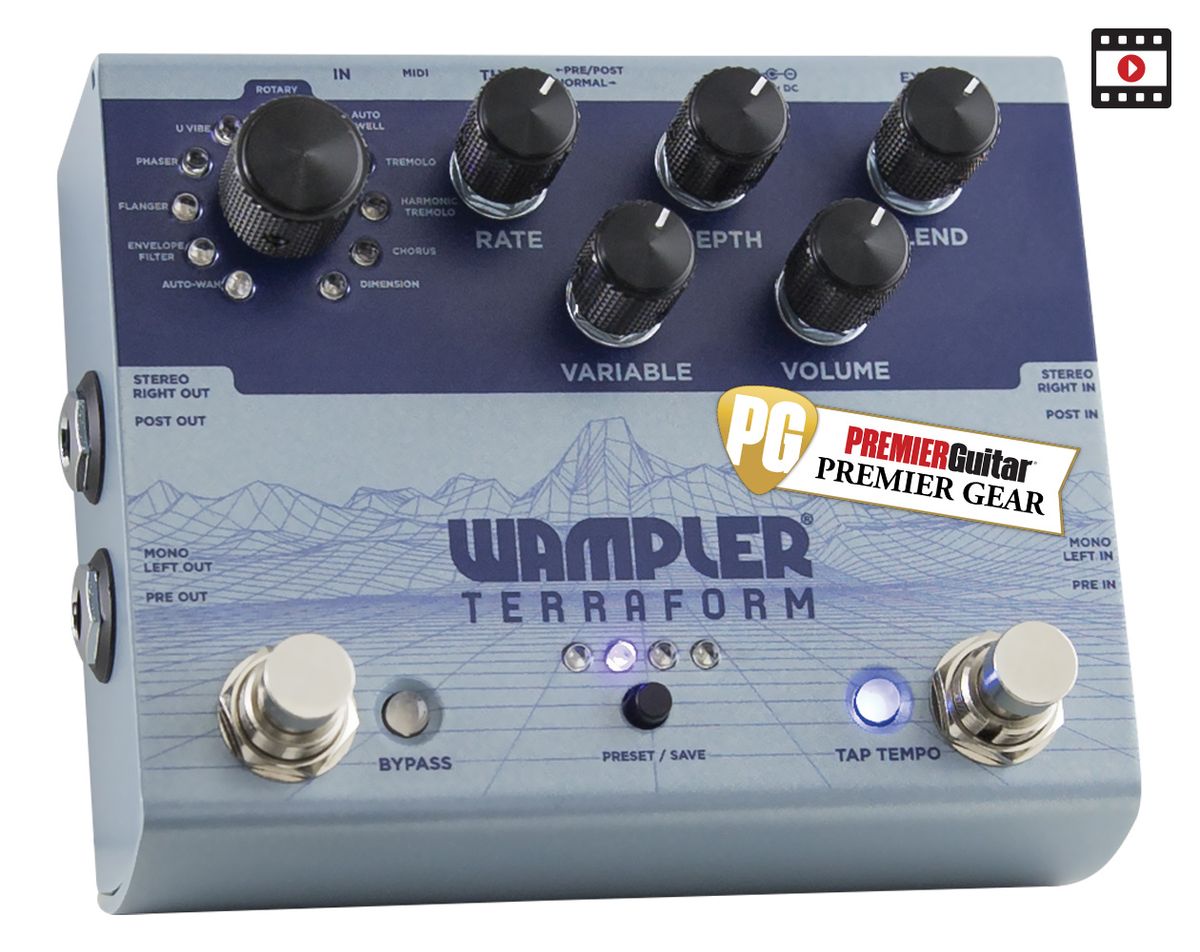 Myriad tones, from classic to tweaky, lurk in this one-stop modulation shop.

The Terraform is the first multi-effects stompbox from Wampler Pedals. The company is best known for creating clever new spins on classic analog effects. But the Terraform is strictly digital—its effects generated by a powerful SAM 5504B chip from Dream, a French DSP (digital signal processing) company.

A Suite of Sweeps
Here, you get 11 fine-sounding modulation and filter effects: auto-wah, envelope filter, flanger, phaser, u-vibe, rotary, auto-swell, tremolo, harmonic tremolo, chorus, and dimension (an alternate chorus sound inspired by Boss’s old Dimension C circuit). You can only use one effect at a time. The demo clip features the effects in the above order. (The guitar is a “parts” S-style with Lollar Firebird pickups, played through a simulated amp in Line 6’s Helix Native plug-in to showcase the effects in stereo.)

Terraform lives in a custom enclosure roughly the size of a standard BB-sized box, but slightly taller. The layout is logical: There are two footswitches, bypass and tap tempo, with an LED to indicate the current tempo. A large rotary switch ringed by LEDs selects from the 11 effects. You wrangle them all via a bank of five knobs. Rate, depth, and level usually do just what you’d expect. However, the roles of the blend and variable knobs differ from effect to effect. The Terraform runs on standard 9V power supplies (not included) and has no battery compartment.

Living the Dream
The Dream chip generates rich, detailed tones. The pitch shifting is better than on some cheaper DSP chips, which means smoother, more immersive modulation effects, devoid of tinny resonance. These effects aren’t particularly analog sounding. For example, you don’t encounter the quirky noise and spectral distortion you’d get from a chorus pedal with a bucket-brigade chip. Yet there’s nothing harsh or cold about these inviting textures.

All that is testimony to the Dream chip’s sound quality. The things that set the Terraform apart are savvy programming with wisely chosen parameter and range choices, an intuitive interface, and a wealth of clever extras.

More Than Mimicking
The Terraform’s ergonomics are excellent. The close knob spacing lets you spin multiple pots simultaneously, which is more useful than you might think. When dialing up a new sound, I found myself twisting rate and depth simultaneously, homing in on a general flavor, and then seeing whether the blend and variable pots added anything cool. Sure, you could consult the manual or the included cheat sheet to identify exactly which parameter the variable knob addresses. Or you might, like me, just think of it as the “do something cool” control and add to taste.

It’s easy to tell which vintage effects inspired these algorithms. But these are more than simple sound-alikes, because edit options usually expand the range of original effects. Take u-vibe, based on the 1960s Uni-Vibe phaser. The original has rate and depth controls, plus a chorus/vibrato switch. Here, the rate, depth, and blend controls serve those functions, except that the blend knob offers more shadings than the original’s all-or-nothing toggle. Meanwhile, the variable knob provides alternate modulating waveforms not found on the original. Another example is the harmonic tremolo algorithm, based on the chorus-like dual-band tremolo circuits of brownface Fender amps. Those amps have rate and depth controls, but no way to manipulate the crossover frequency or bandwidth. On Terraform, blend and variable dials provide those options, greatly expanding the effect’s range.

You can save those preferences with your patches. The Terraform can store eight sounds in memory. You recall them using the pedal’s pushbuttons, or via MIDI if you plug the included ¼"-to-MIDI adapter into the pedal’s expression jack and connect to anything dispensing program-change messages. Or you can plug in an expression controller (not included) and pilot any of the five edit knobs via the pedal. These assignments are also saved with your patches.

The Verdict
For many players, the Terraform will be a one-stop modulation/filter shop. It’s easy to imagine it replacing multiple pedals, especially given an ingenious effects loop that can situate individual effects before or after the loop circuit. The sound quality is excellent. The build is solid. The price is fair. The sonic options are immense.