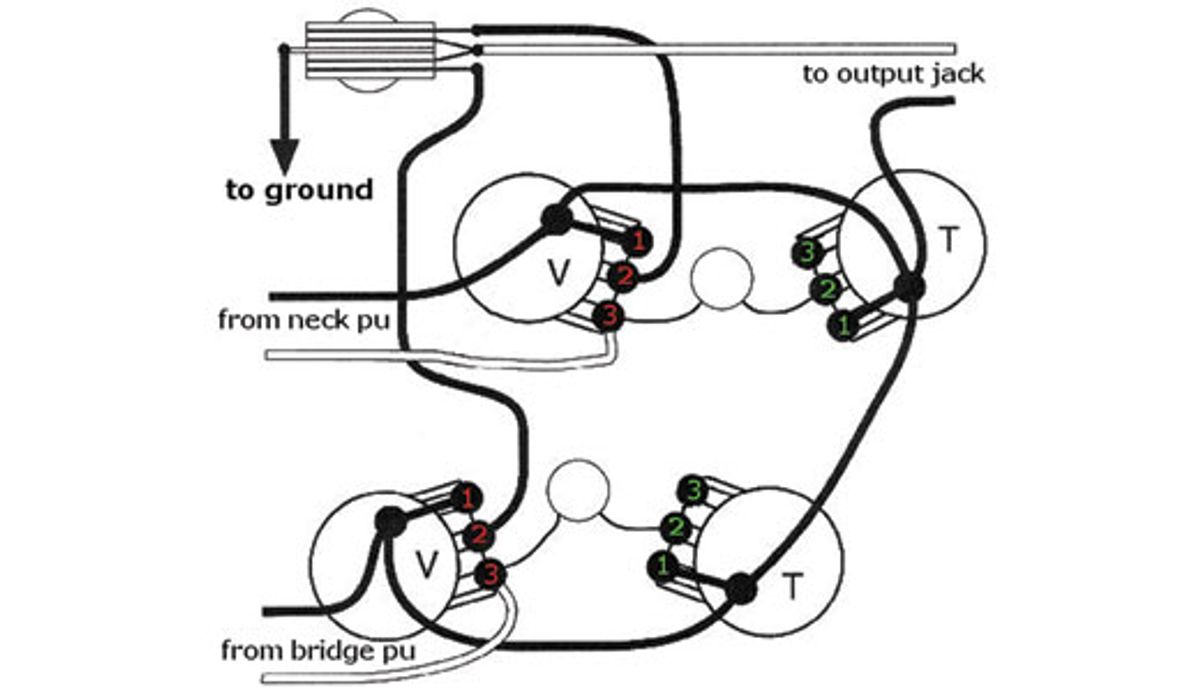 Ever been frustrated by how the two volume controls interact on a dual-humbucker axe? Here’s how to make them work independently.

Here's an easy but effective mod for Les Paul slingers that solves a problem they've been living with since the model's introduction more than a half century ago. This project also applies to most other guitars with dual humbuckers, individual master volume and master tone knobs for each pickup, and a 3-way pickup selector switch.

The problem (or not). The Les Paul circuit dates back to the mid '50s. It has changed slightly over time—Gibson used several different tone caps and experimented with tone-pot wiring—but essentially, modern Les Pauls employ the original wiring.

One thing Gibson did not change was the concept of coupled volume pots. You know how this works: With an independent pair of controls for each pickup and a 3-way toggle switch, you can dial in your lead volume and tone using the bridge pickup, set up a rhythm tone using the neck pickup, and then quickly change from lead to rhythm and back using the 3-way switch. This works great—two preset sounds at your fingertips.

But Les Paul players know what happens when you use the middle position of the 3-way switch: The pickups are wired together in parallel, so when both pickups are engaged, rolling down the volume of one even slightly while leaving the other fully open makes the latter much louder than its mate. Even worse, backing down just one of the volumes to zero shuts off the entire guitar.

Why is this? Because the two volume controls are not decoupled, they interact. With a passive circuit like this, it's just the nature of the beast. Consequently, the dual-humbucker world divides into two opposing camps: The first doesn't consider this interaction a problem. It's simply part of the game—get used to it. The other camp regards this interaction as a system error and tries to eliminate it.

Les Paul players know what happens when you use the middle position of the 3-way switch: Backing down just one of the volumes to zero shuts off the entire guitar.

Now, the only real solution for this problem—assuming it's an issue for you—is to switch to active circuitry. All other “solutions" are compromises that may or may not appeal to you. You must let your ears decide.

Swap it out. It's easy to wire a Les Paul so the volume controls work independently: You simply wire the volume pots backwards. (This is how some Rickenbacker guitars and early Fender Jazz basses are wired.)

First, study the wiring diagram shown here. It represents the modern factory wiring typically found in Les Pauls. The black wires are ground; the white wires are the hot connections from the pickups and to the output jack. The black wires that run from pot to pot form the “ground bus." Be careful not to close this ring—leave the connection between the two volume pots open, as shown in the wiring diagram, otherwise you'll create a perfect antenna that picks up all kinds of funny noises. (For a noise-free circuit, it's very important that the ground bus uses a solid, not too thin wire and strong soldering spots.)

Time to network? There's a big downside to this mod: When the pickups are wired backwards, they “see" less resistance, and the output impedance rises. This results in dramatic treble loss when you roll back the volume. It's an idiosyncrasy of passive guitar systems: When you turn down the volume, even just a bit, treble loss is not proportional: A small cut in volume creates a far greater loss in treble response. And the treble loss is even worse when the volume pots are wired backwards.

As far as capacitor and resistor values, that depends on how much treble you like. Some people prefer using a capacitor only (aka “treble bypass cap"), while others like a cap with a resistor in parallel. A useable range for the cap is from 220 pF to 680 pF; a resistor wired in parallel can range from 150k ohm to 330k ohm. A popular choice for a cap-only solution is 330 pF. For a network solution, many players like a 470 pF cap with a 330k-ohm resistor wired in parallel. You could start with this and see what sounds best to you. Small silver mica caps sound excellent for this mod.

Remember, passive circuitry can never add anything that isn't already there, but it can reshape the tone by deemphasizing certain frequencies, which makes others more prominent. This treble-bleed network filters bass so the highs are more pronounced.

Until next time, keep on modding!