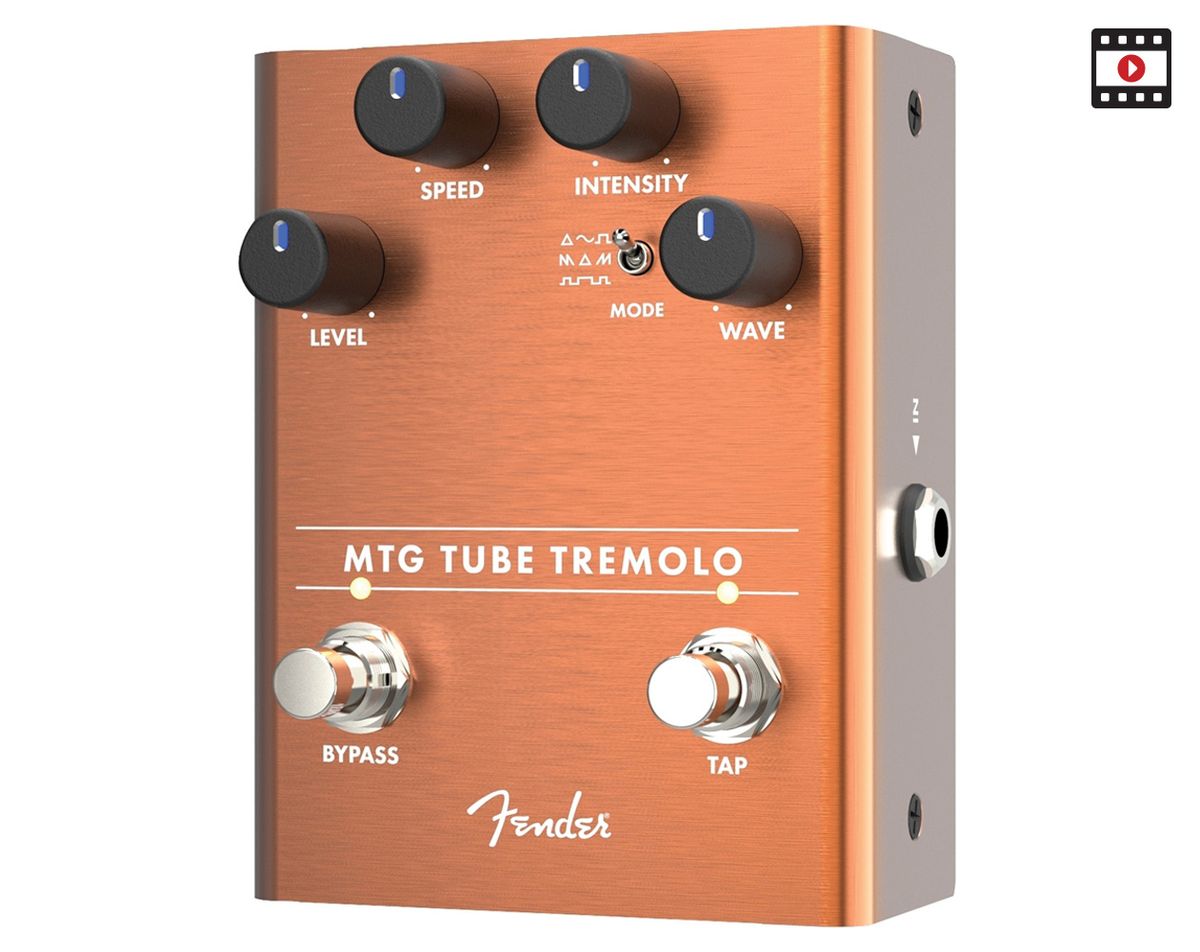 A toneful trembler packed with vintage tics and new tricks.

When gospel-blues legend Pops Staples needed a backline amp, he always requested a Fender with “shake.” If Pops were still with us, he’d be able to get all the “shake” he needed—and more—with Fender’s MTG Tube Tremolo.

Like other Fender pedals I’ve encountered, the MTG honors the company’s heritage by dialing in the traditional sounds just right. But in this case it also explores the wilder side of the tremolo effect and offers control that no old-school amp can offer—thanks in large part to the highly flexible wave controls designed with Bruce Egnater.

Peek Inside the Box
There is, indeed, a tube inside this pedal’s ultra-sturdy 5" x 4" x 2" metal enclosure. It’s a tiny NOS 6025 preamp tube, made in the 1940s. Fender acquired a thousand of them when it bought Groove Tubes in the ’90s. So, naturally, the device requires a 9V power supply—especially because the perceived volume drops a little as tremolo intensity increases, and turning the level dial up compensates for the loss by raising the voltage fed to the tube. Cranking the level also works as a bit of a signal boost—but just a bit.

All four dials have LED position-markers that improve visibility on dark stages, but you can switch the lights off with a switch at the back of the pedal. This is increasingly a standard-issue feature on Fender pedals, and it’s a brilliant, genuinely useful idea.

Just as on a classic Fender amp, there are controls for tremolo speed and intensity. What is improved is the degree of precision the MTG’s speed knob provides. Handy markers for specific beat subdivisions—quarter note, dotted eighth note, quarter note triplet, eighth note, dotted sixteenth note, eighth note triplet, and sixteenth note—are listed around the speed dial, eliminating guesswork. Since there are no detents, you can set the knob anywhere between those spots, too. More personalized speed settings are possible via the tap tempo switch, and a flashing LED above the tap switch always pulses to the active tremolo tempo.

What is improved is the degree of precision the MTG’s speed knob provides.

Outside the Box
Tremolo wave-shaping controls include a mode toggle and a wave dial. The latter blends or selects between available waves shape in a given mode, and together they can produce real magic—sculpting trem forms that run from languid, smooth, and soothing to the nattering blips of Martian radar. In toggle-up position, the mode switch moves through a triangle- to sine-, to square-wave range, providing traditional smooth textures as well as choppy effects. In the middle toggle position, the wave control spans sawtooth to triangle waves. In the down position the wave control governs pulse width for a hard square wave, which is great for stuttering effects.

The wave dial really expands the potential of each waveform. In the toggle’s up position, for example, 12 o’clock on the wave dial provides a creamy balance between smooth and choppy with more buttery and hard pulses at the two extremes. (I run through all three toggle settings at different wave dial positions in the demo video online.) The many pulse and wave shape variations can translate to surreal textures with other effects too: I had a blast setting the toggle in pulse-width terrain, cranking the wave dial all the way right, and passing the signal through a granular delay for a sound a lot like mice squeaking in Morse code.

Obviously, the MTG is not just about weirdness, Many players who use this pedal are likely looking for accurate traditional tones. And with my Stratocaster plugged into a clean Carr Vincent with the reverb on 3, the MTG Tube Tremolo was a ticket to the past. I found a wide variety of pretty and articulate tremolo sounds. My favorites included the gentle shimmers I got from a balance of triangle and square waves, as well as a eighth-note setting with the intensity that I crafted in honor of Pops Staples.

The Verdict
Both classicists and rebels will find textures to love in Fender’s super-easy-to-use, mid-priced MTG, which puts the company’s classic tube tremolo formulas—and more—in one convenient box.