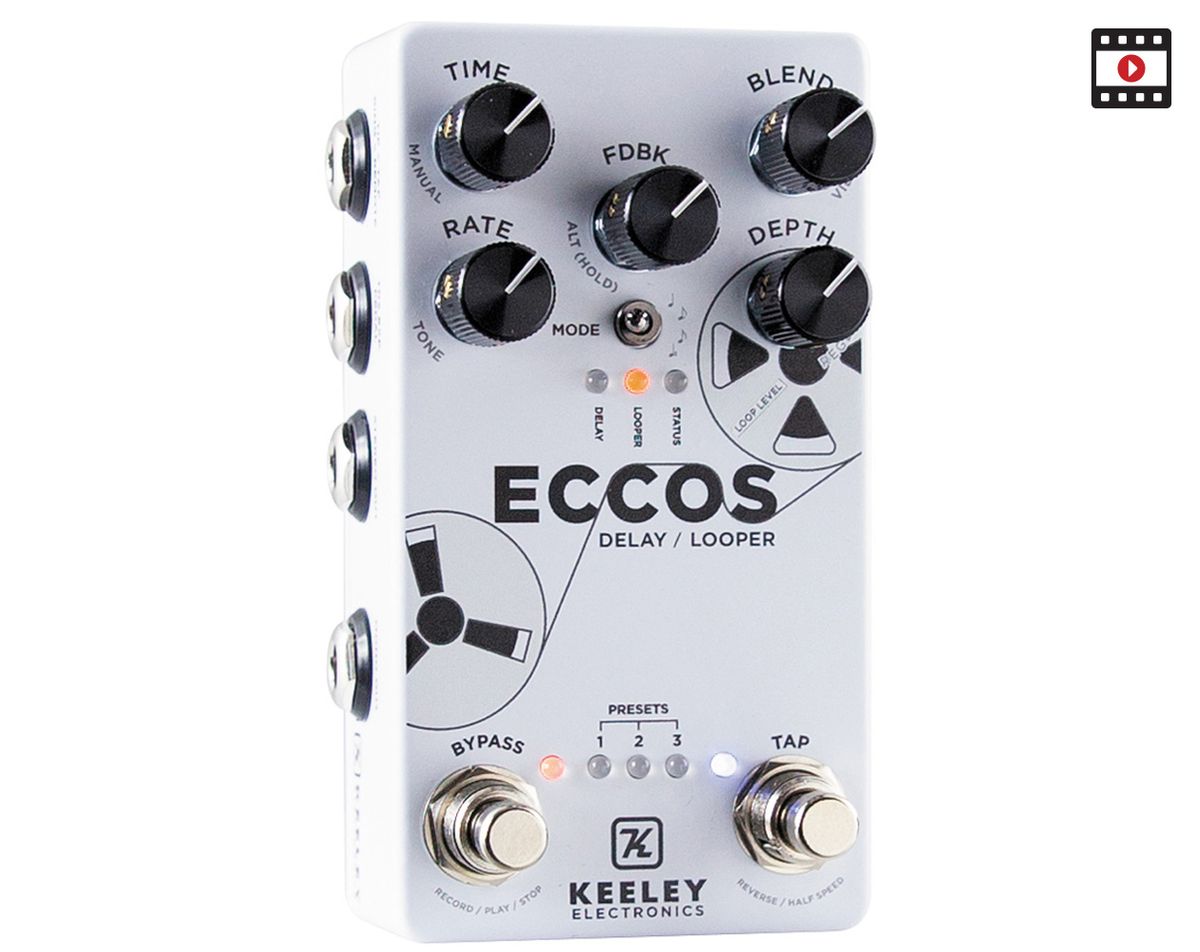 Keeley Electronics’ new Eccos Delay/Looper is an express ticket to Electric Ladyland. Within minutes of plugging into this versatile, well-conceived box, I heard the kind of sumptuous tape-style flanging from “House Burning Down” and “Voodoo Child (Slight Return)” slither from my amp. And that was before I started exploring this pedal’s deep functionality as a delay and looper.

There are other pedals that emulate the combination of tape flanging and delay. But the Eccos permits precision tuning of the repeats and flanging that help you hone in on Eddie Kramer’s vintage delay/flange textures and many other sounds. Eccos also makes it easy to toggle between delay and looper mode, which gives you up to 60 seconds of stereo and two minutes of mono loop to work with.

Eccos is a built-for-stereo beast, and is equipped with two 1/4" stereo-in jacks as well as the usual two-out stereo option. After all, tape flanging is most effective and pronounced when the trails can pan across a stereo image, and Eccos’ stereo outs are modulated precisely for that purpose. There’s also an input for an expression pedal and a remote tap tempo control (neither are included).

Around the Whirl
I tested the pedal with my own stereo rig, anchored by a Carr Vincent combo and an Orange Micro Terror driving a 12" Eminence Redcoat in a custom cab, as well as a Stratocaster, a Zuzu Green Monster with humbuckers and coil-splitting, and a Vox Bobcat with P-90s.

The flanging effects sounded especially open and airy with single-coil pickups, but, truly, all of the sounds were sweet and easy to manipulate. Delay tones are warm and dark and thickened my sound deliciously. There’s great range in the controls too. The feedback dial, for instance, is especially sensitive.

There’s a lot of color in the modulation depth control, which enables distinct and authentic “Bold as Love” swirls.

Situate it anywhere after noon, and heavy picking or a bump with an overdrive might send the feedback spiraling out of control. But this sensitivity is largely a virtue. When I wanted to increase or decrease the whistling qualities of the tape-flange-effect trail, I just nudged the feedback dial a touch—a move you can also perform with an optional expression pedal. There’s a lot of color in the modulation depth control as well, which enables distinct and authentic “Bold as Love” swirls.

Eccos also features a bunch of cool secondary functions that help you more precisely shape the delay and flange. Pressing and holding the feedback dial while moving the rate to the right engages a high-pass filter that adds sparkle to the intrinsically dark, old-school delay voice. You can also give the modulation a more vibrato-like flavor with the blend knob, change the delay time of the flange (time), increase flange feedback intensity (depth), and choose several delay time subdivisions (fdbk). The tap tempo switch, does other duties too: Hold it down and your loop plays backwards; double-tap and it drops to half-speed. You can also use it to create and recall three presets.

Laying down a loop was super easy, though the loop volume control is hidden among the secondary controls, which underscores the importance of reading the manual. Eccos is mostly intuitive, but a little research goes a long way when it comes to unlocking its impressive tone-shaping potential.

The Verdict
There are even more functions lurking within Eccos’ super-sturdy shell, like sound-on-sound recording capabilities and a runaway feedback oscillator, but, alas, not enough space to talk at length about them here. Suffice to say that if you’re prospecting for classic analog delay colors alongside authentic-sounding studio flange effects, and dig the convenience of easy looping, the Eccos is well worth mining.