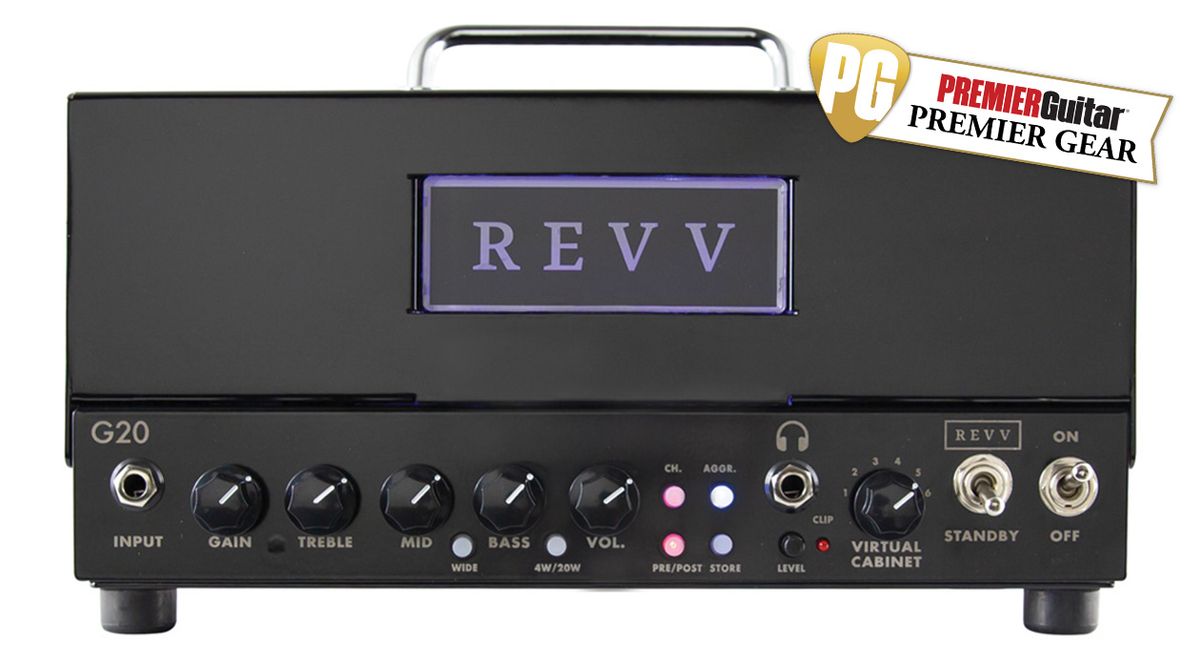 If you’re a diehard devotee of tube-amp filth but want in on IR action, this innovative architecture may be just what you’ve been waiting for. The PG Revv G20 review.

Recorded using an Eastwood Sidejack Baritone DLX with Widerange Jazzmaster pickups and a Gibson Les Paul with 57 Classics into an Audient iD44 going into GarageBand with no EQ-ing, compression, or effects.

Clip 3; Les Paul 57 Classic bridge pickup through gain channel in wide voicing (aggression set to red) with gain and bass maxed, treble at 10 o'clock, mid at 2:30, and volume at 2 o'clock, with an Ibanez ES-2 Echo Shifter in effects loop and G20's speaker output routed to a Celestion Ruby-stocked 1x12 miked by a Royer R-121.

Clip 6: Eastwood's middle position, then bridge pickup into gain channel (aggression off, gain at 2 o'clock, treble at 1 o'clock, mid at 8 o'clock, bass and volume at max) with Ibanez ES-2 Echo Shifter in effects loop, through Celestion Ruby-stocked 1x12 miked by a Royer R-121.

Pretty much no one is gigging and everyone's getting more into recording, so the prospect of a straightforward tube amp that makes our favorite quarantine pastime easy and super flexible is pretty intriguing. With last year's unveiling of the D20, Revv Amplification became the first tube-amp manufacturer to incorporate cab-and-microphone impulse responses (IRs) from industry leader Two Notes Audio Engineering directly into its architecture. But where the D20 was intended as a pedal platform for the masses, the G20 aims to put high-gain sounds inspired by Revv's Generator series into a similarly simple, portable, and recording-friendly head.

The Sixes Have It
Modeling amps aim to meld massive tonal flexibility with portability and convenience, but the 20-watt G20 achieves flexibility via bona fide valve tone. 6V6s—the power tube behind clean-tone champs like Fender's Princeton and Deluxe Reverbs—seem an obvious choice for a clean platform like last year's D20. Some may be surprised to also see a pair of them at work here. But the more you think about the big G20 picture, the more 6V6s' clean-slate capabilities make sense here, too.

Not that there has to be just one big picture, though. Part of the amp's appeal is how it enables you to walk the line between über-simple tube-amp operation and 21st-century digital sophistication. For all the power behind the best modeling gear, many players still find interfacing with modelers overwhelming or just plain overkill. The allure of the G20 is that its 2-channel, shared-3-band-EQ design features just six knobs and canbe as plug-and-play simple as a basic modern tube amp routed to a single extension cabinet of your choice.

If you're willing to go further with your PC or Mac, you can marry real-tube-amp operation with one of six onboard cab-and-microphone impulse response models, which you can send to a live mixing board or a recording DAW—even if you're also using a physical cab. G20 comes preloaded with six diverse options designed by noted session player/IR creator Shawn Tubbs that you choose via the front-panel knob. But if you want to go full-bore, Two Notes' free Torpedo Remote software lets you create an almost infinite array of other combinations to load into the six available slots.

Other notable G20 features: a power-scaling button (which takes the amp from 20 to 4 watts), a “wide" voicing switch, a 2-voice “aggression" button for the gain channel, a pre/post switch for removing the power section from the rear-panel XLR output's signal path, a store button for use with the rear-panel MIDI-in jack and your favorite controller, a level control that governs both the 1/4" headphone and XLR outputs, rear-panel power-tube bias points, a series effects loop, and a jack for Revv's optional 4-button footswitch for MIDI-eschewers ($129 street).

Walking the Tightrope
I tested the G20 with an Eastwood Sidejack Baritone DLX and a Les Paul with 57 Classics, first through a 1x12 cab stocked with a ceramic Weber Gray Wolf, then through a different 1x12 loaded with a Celestion Ruby, then via XLR and an Apogee Duet straight into GarageBand. Through real cab or IR, I found a ton to like. Full disclosure: Working with the G20 was my first foray into IRs (hey—I've got nice mics and a basement studio where I can crank as loud as I want!), but getting cool tones wasn't any harder or more time consuming than throwing up a mic. And this is coming from someone who kind of loathes plug-ins and menu diving. The ability to load six IRs into the G20's front-panel control means once you've found or customized your own faves, you may never need/want to do so again.

The preloaded IRs are based on Revv cabs featuring Warehouse Veteran 30 and ET90 speakers miked with a Shure SM57 and a Royer R-121 (my favorite was a punchy and articulate dry 4x12 image), but the range of options in the Torpedo Remote software is extensive—from a who's-who of mainstream cab and speaker brands, sizes, and configurations to more niche IRs based on, say, Fortin Amplification designs or rare one-offs. Then there are the virtual mics, with everything from the usual suspects to Neumann, Sennheiser, Audio-Technica, Miktek, and Blue simulations you can mix and match, put on the virtual front and/or back of the cab, arrange at close or short distances, at varying angles off axis, and with a variety of ambience choices. Needless to say, if you've got a MIDI-controller setup, the sky is virtually the limit for how many heavy sounds you could wring from this 9-pound head on the fly.

The Verdict
In terms of an all-in-one tool, Revv's tightrope walk between digital IR flexibility and the straightforward tube-amp world yields one of the smartest, most intriguing options on the market. Two Notes' Remote software is super easy and intuitive to use, and since you're not perusing an endless collection of famous amp models, the G20 makes it easier to focus on playing.

I doubt I'd ever go full-IR—in my book nothing beats the interactivity you get being in the same room with a cranked amp. But there's no denying it's an incredibly handy tool to have at your disposal, particularly if your physical cab collection is limited. The IR capabilities open the doors to everything from punchy hard rock to seething black-metal and bludgeoning doom tones (2x15 bass cab, anyone?). The gain knob doesn't apply to the clean channel, which doesn't really break up when cranked, so for semi-clean tones you may have to rely on outboard stomps or guitar-volume maneuvers on the gain channel (both of which work wonderfully). But, in all, a lot of players may find the G20's approach a near-perfect balance between yesterday and today.