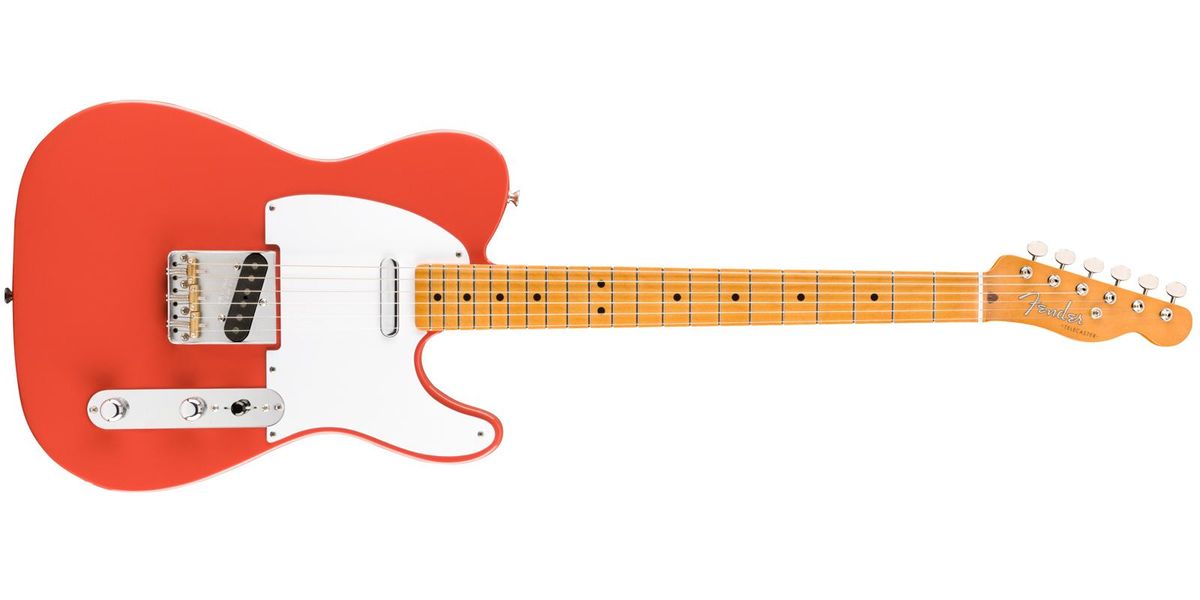 Get convincing “in-between” Strat sounds from Teles and other two-pickup guitars.

This month we'll look at a cool Telecaster wiring that also works with any two-pickup guitar with a master tone/master volume configuration. Designed by the great pickup maker Bill Lawrence, this wiring deals with the so-called half out-of-phase option (more on this in a moment).

Fig. 1 reproduces the relevant page from Bill Lawrence's now-famous scrapbook, where he archived all his wirings as handwritten diagrams. (Thanks to my luthier colleague Ivan “Joe Owl" Franasovic for introducing me to this wiring.)

Bill Lawrence (real name: Willi Lorenz Stich) was born in Germany in 1931 and became one of the country's best guitarists of the post-WWII era. He was a busy session musician and jazz player who performed under the name Billy Lorento. Germany's Framus guitar company even built a signature model for him (the 5/120) that's still available today. Later on, he started a second career in the guitar industry under the name Bill Lawrence. He conceived many groundbreaking pickup designs and other musical instrument innovations. Sadly, he died in November 2013 at age 82, but his music and genius live on.

· Position 4: neck + bridge in parallel “half out of phase"

We all know switch positions 1, 2 and 3 from standard Telecaster wiring (though they appear here in a different order). Meanwhile, position 5 cuts some lows for a slightly brighter tone than position 1, which makes it cool for more prominent rhythm tones and jazz lines. I was sceptical about the value of position 5, but as I experimented, I found I liked it more and more, so I recommend you give it a try as well.

But for me, the highlight of this wiring is position 4, with both pickups together and “half out of phase" with each other, a concept later adopted by Fender for their Jerry Donahue signature Telecaster and by Peavey for their Omniac JD model.

The highlight of this wiring is position 4, with both pickups together and “half out of phase" with each other.

So what the heck is “half out of phase?" I don't want to bore you with electrical theory, so here's a short, simplified explanation.

But when a signal passes through a capacitor, the voltage leads the current by 90 degrees. In this wiring, one pickup's signal gets routed through a capacitor, shifting the phase by 90 degrees—exactly half of 180 degrees, and therefore half out of phase. Bill Lawrence chose to send the neck pickup's signal through an additional capacitor, connected directly to the 5-way switch. (If you want to dig deeper into the out-of-phase thing, check out this column: http://www.premierguitar.com/articles/phasing-out-how-to-get-out-of-phase-sounds-from-a-stratocaster-1)

So what are the tonal differences compared to a standard out-of-phase sound? The standard version cuts more lows and mids, while position 4 here has a fuller-sounding tone. Half out-of-phase wiring is perfect for mimicking a Stratocaster's “in-between" positions (2 and 4) using a Telecaster. (Even though on the Strat, the two pickups are actually in phase.) This, for me, is the real benefit of this wiring. I encourage you to give it a try and experiment with the pickup height adjustment screws. You really can get something close to the Strat “in-between" sound we all love. That's definitely icing on any Telecaster cake!

You can replace the stock Tele pickup selector with any standard 5-way switch for Strats. Both pots are 250k audio-taper types. The wiring works best with two single-coil pickups, like standard Tele ones. The capacitor connected to the tone pot is your typical tone cap. (Bill Lawrence chose a standard 0.022 µF value, but feel free to experiment with other values to find your personal favorite.) The cap connected to the 5-way switch is the phase-shifting cap mentioned above. Bill selected a 0.01 µF cap. In his words: “You may try caps between 0.005 µF (5000 pF) and 0.02 µF. The smaller the cap, the sweeter the sound."

I think 0.01 uF is a great choice, but this really depends on your particular pickups. I recommend experimentation, fine-tuning to get as close as possible to a Strat's “in-between" tones. The tone pot wiring differs slightly from a standard Telecaster's, but it works as intended, so I left it the way Bill designed it.

While Bill's handwritten diagram is iconic and über-cool as a historical document, I'm including a clearer drawing (Fig. 2) that may be easier to follow.

Next time we'll continue with another guitar mod, but if you'd like to see more ideas from Bill's scrapbook, let me know, and I'll cover them in future columns. Until then, keep on modding!