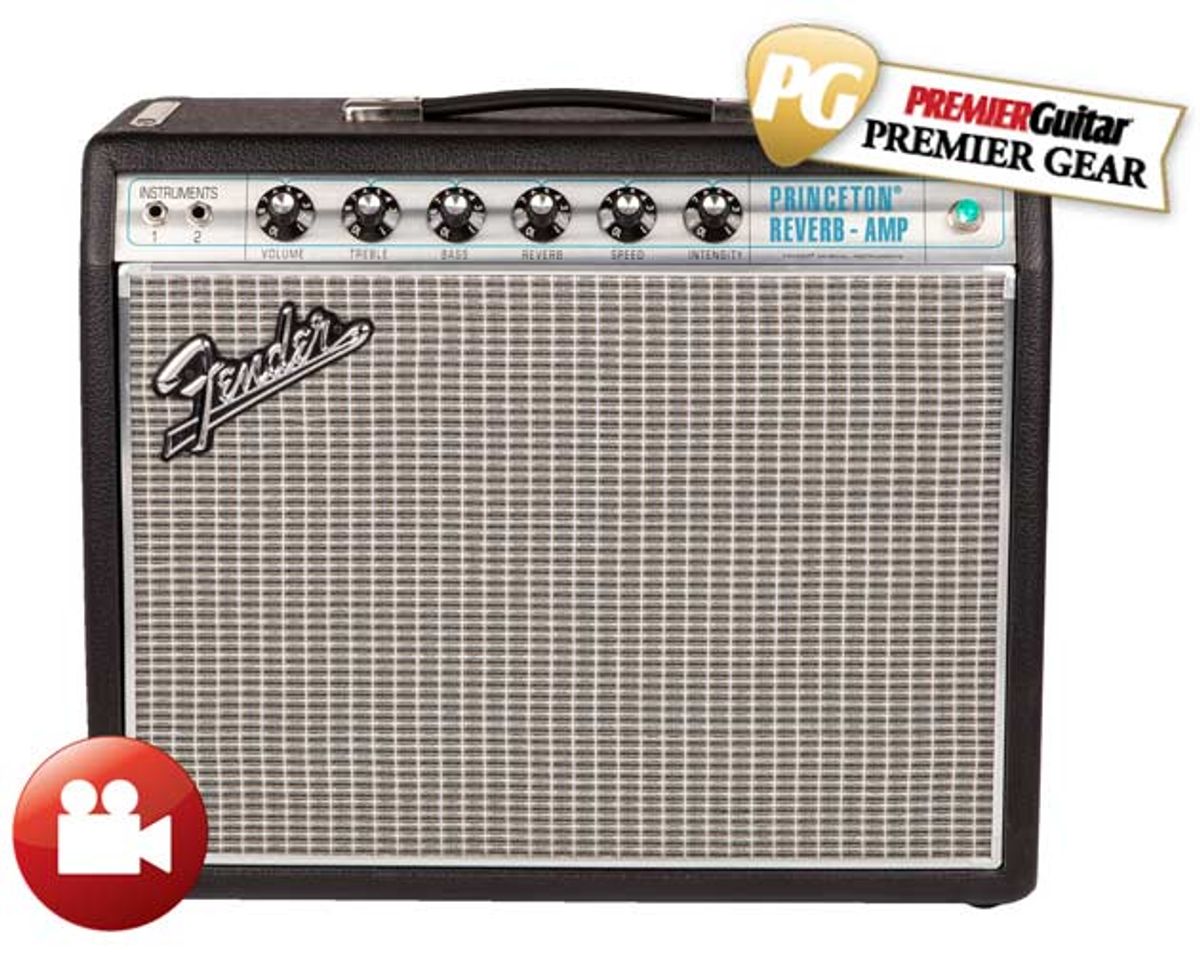 Fender’s Princeton Reverb is one of history’s great amps. Introduced in 1964, it’s been a go-to amp for guitarists from rockers to jazzers, especially in the studio and for gigs with modest volume requirements.

The Princeton was never the amp for everybody, but it came pretty close. If you’re working with a loud drummer and like your tone clean as can be, it won’t take long to reach the limits of 12 watts and a ten-inch speaker. On the other hand, it’s not uncommon to hear guitarists say: “If your band’s too loud for a Princeton, then your band is too loud.” The dictum is truer than ever in an age of better and more powerful P.A. systems.

Fender stopped making the original Princeton Reverb in the late ’70s, though the company has used the Princeton name for other models over the years, some of which bore little resemblance to the original. A few years ago, Fender added a Princeton Reverb to its line of ’65 Reissues, and recently introduced the ’68 Custom Princeton Reverb featuring circuit tweaks that, while less vintage-correct, are friendlier to pedals and deliver more modern and immediate response.

Silverface Beauty
Despite the amp’s name, Fender is up-front about the fact that this is not a strict reissue. While the amp captures the general vibe of vintage units, it’s wired for less headroom and less negative feedback (for a more dynamic response).

Fans of Fender design minutiae will love the vintage-accurate silver-and-turquoise front panel and grille cloth, aluminum trim, and chrome hardware. In fact, the only obvious differences between the Custom ’68 and a vintage Princeton Reverb are on the rear panel, where there is now a standard cord socket, a metal cage protects the power tubes, and in a nod to 21st century safety compliance, there’s no ground switch.

What really knocked me out was how sensitively the amp responded to varying types of pick attack and guitar volume knob settings.

The amp has two inputs (the second is padded by –6 dB). Six knobs control volume, treble, bass, reverb, and the tremolo’s speed and intensity. A blue jewel power light replaces the original red one. The rear panel is similarly streamlined: there’s a fuse, an on/off switch, two speaker outputs (one for the built-in speaker, another for an extension), a 1/4-inch TRS jack for the included vintage-style two-button footswitch (for controlling reverb and tremolo), and RCA in and out jacks for the amp’s spring reverb tank.

The tube array is vintage-correct: two 6V6 power tubes, three 12AX7s, a 12AT7 reverb driver, and a 5AR4 tube rectifier. The transformer is a Schumacher, and the speaker is a Celestion Ten 30.

Sparkly Tones
It took all of one note from a Gibson ES-335 with stock ’57 Classic pickups to know I was going to like this amp. Even at living room volume, the Princeton possesses the sparkly and slightly spongy response you hope for from a good Fender amp. The nice, fat jazz sound from the neck pickup had me reaching for my Real Book. The output remained clean until the volume knob reached 4 or 5. This setting was loud and clean enough for most jazz gigs. Above that, the Princeton gets surprisingly loud and begins to break up in a most musical way.

But what really knocked me out was how sensitively the amp responded to varying types of pick attack and guitar volume knob settings. With the amp’s volume around 6, I could go from playing clean chord comps with my thumb to a more saturated sound when digging in with a pick. The amp’s inherent compression narrowed the volume differences between those extremes, which makes the ’68 Princeton ideal for conveying dynamics without blowing away your bandmates in louder passage.

I also tried the Princeton with a Squier Classic Vibe Telecaster Custom and loved what I heard. Played clean, the tones are quintessentially Fender, ranging from nice, jazzy warmth with the neck pickup and the guitar’s tone control rolled back, to biting bridge-pickup twang with the controls wide-open. Just for fun, I tried a Jim Campilongo-inspired move and turned the Princeton’s volume, bass, and treble knobs up all the way, controlling the volume only with the guitar. Played this way, the amp had amazing range, though it became hard to control the bass response at louder volumes. When pushed with a TS-9-style pedal, the amp provided excellent overdriven sounds.

You’d expect this amp to have sweet-sounding reverb, and it does. But as nice as the reverb sounds, complete saturation occurs with the knob at about 5 or 6, which Fender chalks up to the reduction in negative feedback. The amp’s vibrato is gorgeous, deep, and as authentic-sounding as the reverb.

The Verdict
The Custom ’68 Princeton Reverb is a great amp. It’s not a down-to-the-letter vintage replica, but for some players it may prove more versatile than an original. Yes, some gigging players need a little more volume than the Princeton can deliver. But anyone seeking that classic sparkly Fender tone at a less-than-boutique price needs to check out the ’68.