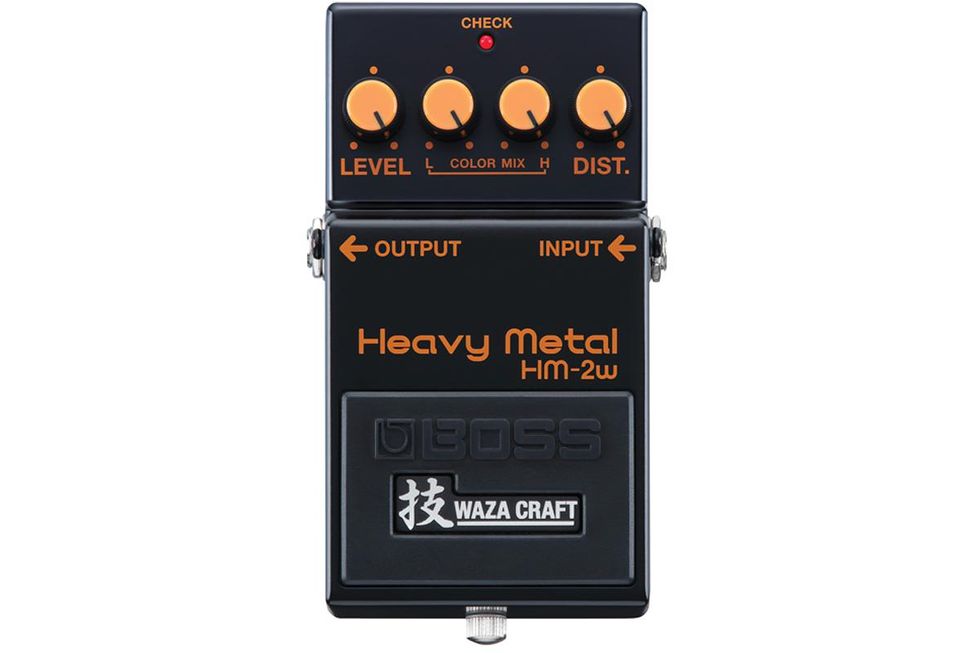 The foremost pedal for Nordic metal nastiness returns, more potent than ever.

A clever re-working of a classic metal-toned distortion, with enhanced versatility.

Arguably less versatile than Boss would like us to think.

It's comforting that Boss pedals haven't changed their basic look and format since the late '70s. For all the boutique marvels that have come and gone, opening a Boss box still instills a sense of reliability. Boss pedals aren't just comfortingly familiar and bulletproof, though. Many Boss circuits are groundbreaking, timeless classics that deliver distinctive sonic results. And there's a strong sense of classicism about the HM-2w Waza Craft Heavy Metal pedal, a revamped reissue of the popular distortion originally manufactured from 1983 to 1991.

On the HM-2w, the classic Boss recessed control panel is home to four knobs for distortion, a "color mix" EQ section with high and low knobs, and a master output level. Waza Craft updates enter the picture in the form of a small slide switch on the crown that selects between original voicing (S, for standard) and a custom tuning (C) that's tighter and more aggressive. The pedal has a lower noise floor and 3 dB more output than the original, as well as an improved buffer when bypassed. Like the original, it also looks just plain mean.

Pedal to the Metal

The original HM-2 Heavy Metal was among the first pedals to wear the amp-in-a-box mantle. Don't let that loose classification fool you, though. The HM-2w Waza Craft is a full-blooded distortion pedal. You wouldn't exactly call it "tube-y." But scooped sizzle and doomy buzz saw harmonic saturation? It has loads of that on tap. The reduced noise helps explore those textures with a lot more confidence, too.

The "C" mode adds some gain, saturation, and punch, with just a little more push in the mids and some added upper-mid/treble bite.

While Boss claims the HM-2w Waza Craft is capable of lower-gain tones—a little classic rock or vintage metal, perhaps—the pedal's priorities are clearly more metal-aligned. Crank all four knobs and you'll feel your amp blazing and sounding joyously evil in the process. To say the HM-2w pushes a front end is an understatement. Generally, the pedal's voice is predisposed toward a scooped EQ profile, but the color mix knobs, while not super rangy, are effective at dialing in some variations.

The "S" mode does a great job of copping the original tones. The "C" mode, meanwhile, adds gain, saturation, and punch, with just a little more push in the mids and some added upper-mid/treble bite. I'd call it contemporary rather than more aggressive. But it proved to be my favorite mode in a pedal that offers many cool, super-fun paths to metal mayhem.

Built like a Boss and packed with distortion power, the HM-2w Waza Craft does a great job re-creating the original Heavy Metal's chainsaw grind and, somehow, adds muscle and headroom for extended modern metal hijinks. The HM-2w has a strong personality, and some shoppers might want to gauge how retro and transformed they want their amp distortion and associated dynamics to be. But if you're on board, the HM-2w delivers a breed of proto-metal distortion that's in a league of its own.

From Your Site Articles
Related Articles Around the Web
boss