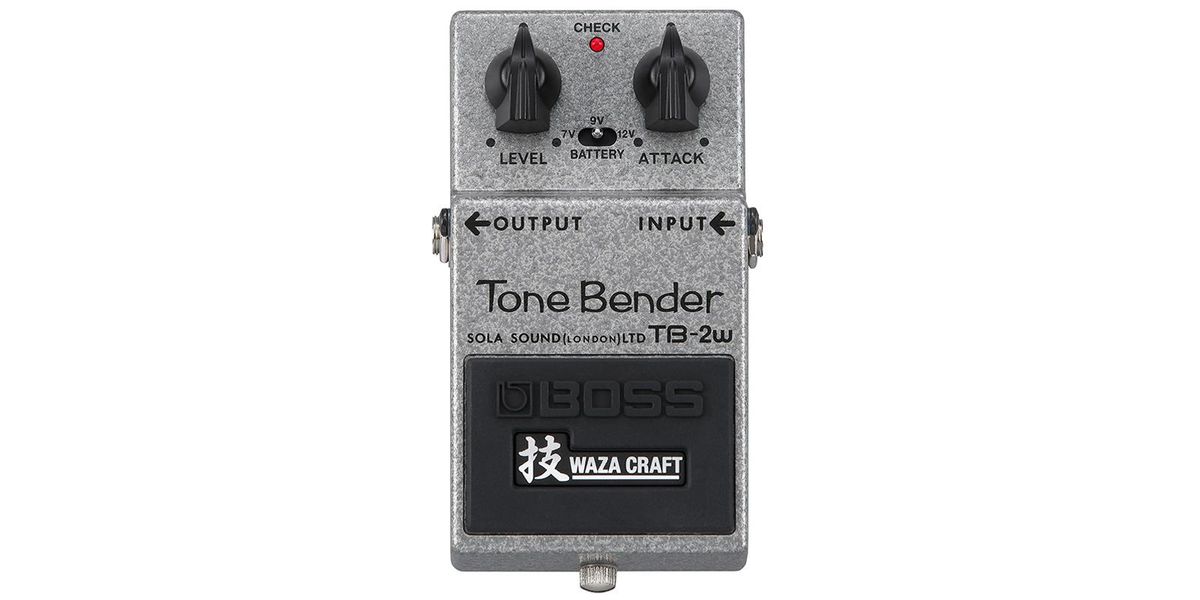 Two of the most influential pedal builders ever conspire to clone a classic.

Authentic Tone Bender sounds at the friendliest side of the Tone Bender performance envelope. Lots of range and color in level and attack controls. Excellent dynamic response.

Other fuzzes may have been first. Others more famous. Some more ferocious (maybe). But none better embody the primal appeal of '60s fuzz better than the Sola Sound Tone Bender MKII.

In the unlikely event you didn't know, the Tone Bender MKII was the fuzz voice of Jimmy Page in the late-period-original-Yardbirds and Led Zeppelin eras­—and about a gazillion other garage and psychedelic bands around the world (especially in its Vox-licensed guise). But as popular as the MKII was and remains, it was never the easiest fuzz to wrangle. It sounds and feels explosive and piping hot. It produces hopping-mad treble peaks that love to feed back. And the low-mid and bass output usually fracture, crumble, and blur thrillingly under the weight of high gain.

Yet these facets of the Tone Bender's performance, in aggregate, are also its strengths. And when you have a great one in your chain, you have a seriously expressive tool at your disposal. Which brings us to the Boss Waza Craft TB-2W Tone Bender, a collaboration between Boss and original Tone Bender manufacturer Sola Sound. The TB-2W is a great MKII. And one of its great strengths is the way it consistently operates at the user-friendliest end of the MKII performance envelope. It's one of the most balanced and controlled Tone Benders I've ever played. And it doesn't seem to sacrifice an ounce of attitude to get there.

A Meeting of Fuzz-Melted Minds

In an age of co-branding efforts gone bonkers, it's easy to imagine a project like this gestating in a board room and emerging as more style than substance. But the TB-2W was born from a serendipitous meeting between two bona-fide pedal maniacs: Boss president Yoshi Ikegami and Sola Sound chief Ant Macari. As meetings between circuit fiends tend to do, it led to an intriguing idea: Could Boss build a MKII that honors a MKII's many quirks and idiosyncrasies, and lives up to their own manufacturing standards?

The effort hinged on a reliable source of germanium transistors. (While it's true that some vintage pedals built with a certain transistor type may sound fantastic, most dedicated pedal builders agree that consistent, matched values—rather than brand and vintage—determine a transistor's suitability for a fuzz circuit.) That quest slowed the project. But ultimately, Ikegami and his crew sourced enough to reliably build 3,000 TB-2Ws. They selected a template: Sola Sound MKII No. 500—picked from Ant's own trove of vintage treasures for its smooth-but-nasty essence—and got to work.

It can be tempting to think of '60s fuzz as thin, but the TB-2W is most certainly not.

Turn It Up! Bring the Buzz

It can be tempting to think of '60s fuzz as thin, but the TB-2W is most certainly not. Humbuckers bring out its burlier side. To my ear, they strip some of the air and clarity you hear in the single-coil/TB-2W relationship—especially when playing chords, which is another TB-2W strong suit. But humbuckers also produce smoother, thicker glam and proto-doom tones. They sound massive in detuned settings, or luxurious and sophisticated if you dial back guitar tone and explore wooly David Hidalgo and Cream-era Clapton zones.

Tone Benders aren't as renowned as Fuzz Faces for responsiveness to guitar volume dynamics. But the TB-2W could smash that barrier. The key to getting the best medium-gain, guitar-volume-attenuated tones from the Tone Bender is to reduce the pedal gain a notch along with your guitar volume. At these pedal gain levels, the TB-2W's fuzz is still savage with a capital "S." But nudge back the guitar volume, too, and the TB-2W produces bristling, toppy overdrive tones that add a live-wire edge to Dave Davies-style power-jangle arpeggios and chords. Humbuckers in this environment tend to sound less sparkly and clear, but can still yield exciting, thick mid-gain overdrive and lead tones.

In general, the TB-2W's dynamic range is superb, and I'd venture better than the average MKII. Even more dynamic range comes via the 3-position voltage switch—a Waza Craft series touch that helps emulate the tone variations that come via fading batteries (7V mode), a standard 9V setting, and the higher headroom of a 12-volt setting. The differences can be subtle and often take the form of less- or more-cohesive low-end tones. But at some particularly saturated amp and pedal settings, the 7V level sounds distinctly more chaotic, while the 12V sounds full and better suited to smooth, singing passages.

Boss makes consistently excellent pedals. And there's great reassurance in knowing that such a personal, obsessive quest shared between two tone-fixated pedal freaks was backed by Boss's considerable R&D resources. But none of that would matter much if Boss hadn't so ably nailed the sound, feel, and visceral thrill of a great Tone Bender.

The TB-2W is a very well behaved version of a fuzz that's hard to keep on a leash. That Boss executed it without sacrificing the Tone Bender's feral nature is no small achievement. It's dynamic, responsive, and offers uncommon and varied colors through the range of its controls—even compared to originals and well-built clones. There's no shortage of competition for good Tone Bender clones at $349. And you'll be lucky just to get one of the 3,000 that exist. But for those of you charmed enough, you can rest assured that this Boss homage can hang with some of the best—and then some.

From Your Site Articles
Related Articles Around the Web
boss