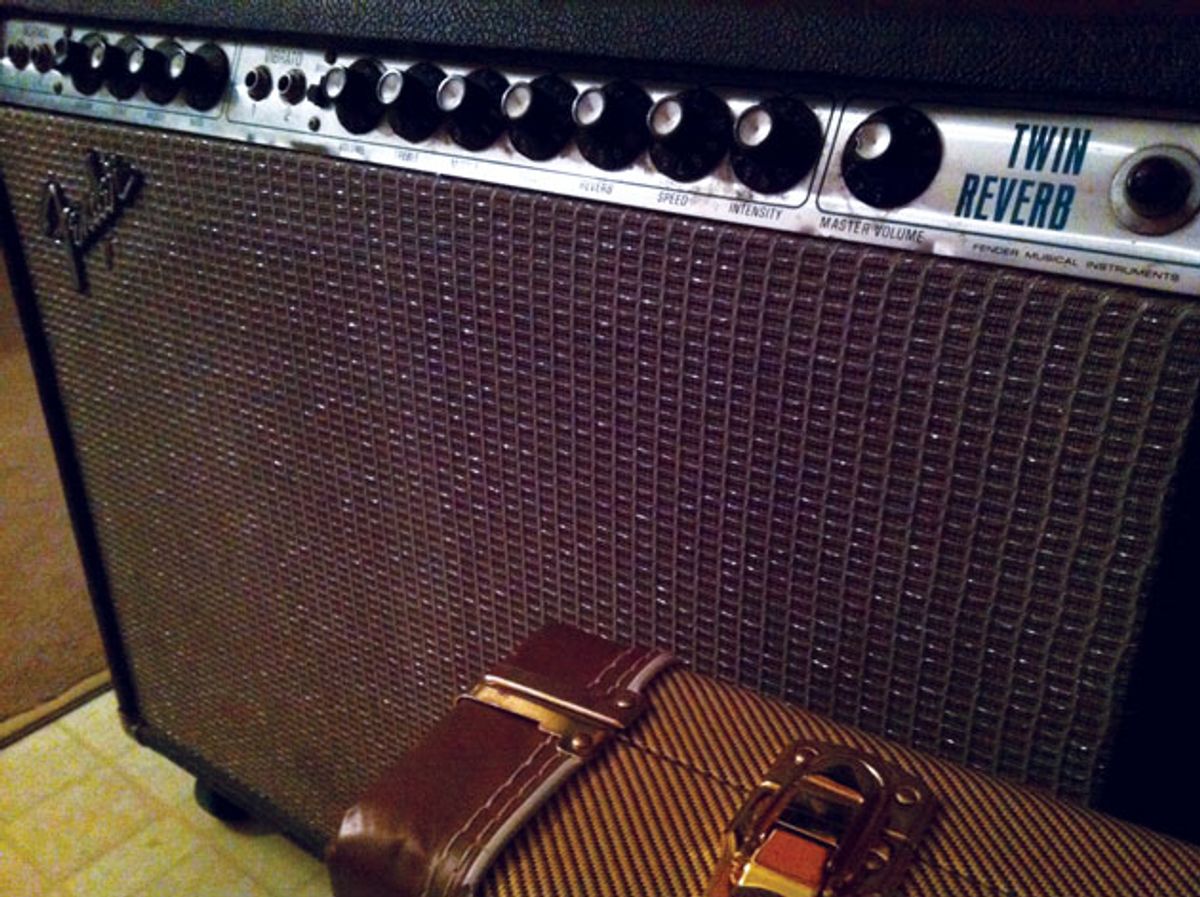 Some silverface Twin Reverbs feature a master volume control with a push/pull switch for extra gain.

Why don’t master-volume Twin Reverbs get any respect?

I just got a ’70s silverface Fender Twin Reverb that needs a little TLC. Surfing the various forums, I’ve learned that this master-volume edition of the Twin is one of the most (unfairly, to me) maligned designs. The only indication of power is the “300 watts” label on the back.

I've wanted a silverface Twin or Pro Reverb since I was a teen. To me they are loud, clean, blank slates to color with different guitars and pedals. I’d appreciate any thoughts you might have on this amp.

The Twin Reverb design has been through many iterations since its 1963 debut. The amps Fender produced between 1963 and 1967 are known as “blackfaces” because of their black control panels, and their designs remained largely unchanged during this period. Blackface Twin Reverbs are the most coveted versions of this amp. With their stated power of 85 watts, they are the most powerful Fender amps of the era.

In 1968 Fender changed to the “silverface” control panel. The circuitry was altered as well: There were changes to the bias and phase inverter circuits and, most important, the output stage. For whatever reason, the engineers at Fender added seven additional components to the output stage, effectively turning it into a semi-cathode-biased output. While these amps were supposedly rated at 100 watts, they are nowhere near as potent as their predecessors. Some players actually prefer these models, however, because they tend to compress more easily than any other Twin. According to the dates on Fender schematics, these “improvements” only lasted for a year. You can easily identify these 1968 amps by the silver-metal band around the perimeter of the grille cloth.

The 1969 schematic revision shows a return to the standard fixed-bias, 100-watt output-stage configuration, though the bias and phase inverter changes remained. An additional change occurred in 1970 with the addition of a capacitor to eliminate “ticking” in the tremolo circuit. The next change was the addition of a master volume control in 1972. This brings us to the era of your amp.

Now, having a master volume control on a Fender Twin Reverb, or most any other Fender amp of this era, seems like a useless addition. Master volumes are generally associated with and necessary in amps that use considerable front-end gain to overdrive the preamp section. The signal level can then be reduced prior to the output stage to control overall amp volume. There is not a huge amount of gain in the preamp stages of a Twin Reverb, at least not enough to achieve significant overdrive. So why incorporate a master volume?

Most post-blackface “improvements” can be returned to pre-’68 specs, yielding a pretty toneful amp.

One explanation might be to allow the amp’s preamp section to be overdriven by an external gain-boosting device, such as the Electro-Harmonix LPB-1 or the Dallas Rangemaster, both popular in the late ’60s and early ’70s. Turning up the channel volume allowed increased overdrive in the preamp section, with the overall volume of the amp controlled by the newly added master volume. Okay, now it makes a little more sense. But the engineers at Fender took it a step further, adding the ability to access more gain internally. This boost is activated via a master volume control with a push/pull switch.

So where did this extra gain come from? From the most unlikely of places: the reverb drive signal! The reverb drive circuit in most tube-driven reverb amps is actually similar to a small, low-power, single-end output stage. The tube is fed a signal (from channel 2, or the “vibrato” channel, in the case of Fender reverb amps). The tube’s output connects to a transformer, exactly as in a single-ended amp like a Champ. But instead of being connected to a speaker, the output of the transformer in the reverb drive circuit is fed to a transducer in the reverb pan. It’s similar to a speaker, except instead of driving a cone, it drives a spring. As you can imagine, a signal derived from this circuit could have substantial level, which could easily overdrive a preamp tube—and since the overdrive comes from a little tube power amp, it should sound pretty good.

In reality, the result was far from stellar, and I’m not sure I know anyone who actually uses this feature. I’ve never ascertained if this is because the reverb drive signal simply doesn’t sound as good as you’d expect, or because of where this signal is applied in the amp. Either way, this under-whelming overdrive tone—together with the master volume and other post-1967 circuit changes—is why your amp is, in your words, maligned. But don’t lose sleep over this, as most post-blackface “improvements” can be returned to pre-’68 specs, yielding a pretty toneful amp. Hmmm—food for thought for my next column.

I hope that sheds a little light on your amp, but remember: It’s only a bad amp if you don’t like it!