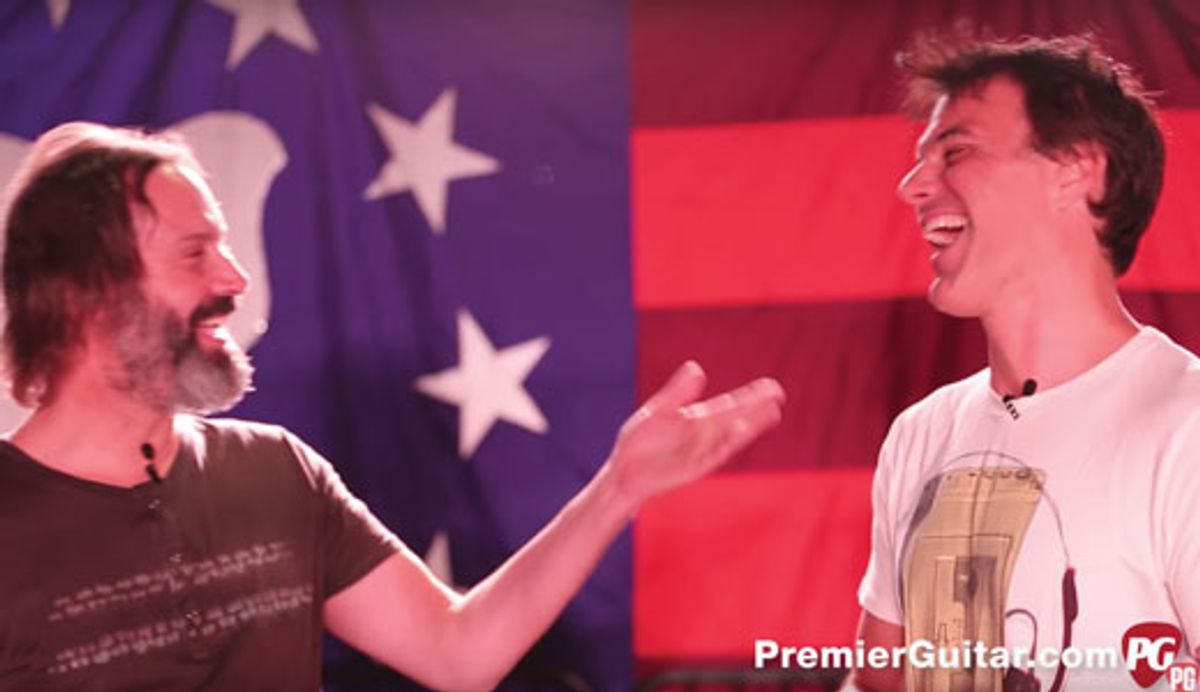 Video
Last Call: Neal Casal and the Dangerous Thing We’re Afraid to Talk About
Neal Casal Neal Casal and John Bohlinger share a laugh during the filming of the Chris Robinson Rig Rundown in Nashville in 2016.

Mental health issues affect millions of people. Let’s talk about how we can help each other before it’s too late.

Neal Casal and I met in 2010 on the set of the movie Country Strong, an age-old portrait of a train-wreck musician (played by Gwyneth Paltrow) spiraling toward her tragic demise. The director wanted realism, so she hired real musicians (Neal on guitar, me on bass) for Gwyneth's band. In between takes, Neal and I jammed, traded dry jokes, and shared a lot of laughs. After the movie wrapped, we stayed in contact, hung when he was in Nashville, and Neal contributed photos to my column. Two years ago, we filmed a Rig Rundown with his band, the Chris Robinson Brotherhood. It appeared that Neal was thriving ... then he killed himself last August.

Neal's suicide was shocking, but sadly it's an epidemic. Worldwide, there are roughly 800,000 suicides per year, which translates to about one every 40 seconds. If that's not grim enough, Rolling Stone recently cited a 2018 study by the Music Industry Research Association, which found that 50 percent of musicians reported symptoms of depression. Studies tell us that mental health struggles are more prevalent among creative types, but if you are one, or have spent your life surrounded by artists, you've probably seen it firsthand.

Adam MacDougall (Black Crowes) probably knew Neal best. They toured together for nine years in the Chris Robinson Brotherhood and formed their own band, Circles Around the Sun, which was just getting its legs when Neal checked out. I asked Adam if he saw Neal's depression issues.

“I saw it in him, as he probably saw it in me. Poets, writers, musicians through the ages have always been the sensitive ones looking for an outlet for this beautiful sadness. Neal and I tended to turn that into macabre humor. But I've been listening to his back catalogue of songs. It's surprising how often it was alluded to. Artists wear their hearts on their sleeves, so it wasn't a red flag, but listening to it now is just chilling. But honestly, every musician I've talked to, particularly after Neal, not one of them hasn't considered [suicide] at least once."

Mental health, especially depression, is the most dangerous thing that we're afraid to talk about, probably because it carries an embarrassing stigma and is easily misunderstood. People have plenty of reasons to be sad, be it bad luck or bad choices, but the clinically depressed have inherent issues that are often biological and can't be fixed with a Band-Aid of sheer willpower alone.

For those struggling with mental illness, a risk one takes in talking about one's problems is being perceived as an overly dramatic complainer. Some people may need to hear, “you have no reason to be depressed, be strong, man up," but to a depressed person, those platitudes make them feel unworthy of what they're feeling. So, they try to work it out themselves or disguise pain as humor. I know a lot of musicians who joke about suicide, but few who open up about it.

In retrospect, you could see all of that in Neal, which leads to the inevitable question: Who's next? This is a musician mag so, statistically speaking, half of us, including myself, have issues.

I was diagnosed as manic depressive when I was 22. (A few years later, the DSM-III—the Diagnostic and Statistical Manual of Mental Disorders— changed the term to bipolar, thinking the term “manic" might offend the nuts, but I prefer it, thanks to Hendrix's hardest rocking 6/8 song ever.) I disagreed with the diagnosis, but over the past 30 years I've checked off nearly everything on the bipolar brochure. I've been involuntarily hospitalized, medicated, incarcerated, twice divorced, and had five other psychiatrists and psychologists label me bipolar II. Combine that evidence with all the crazy shit I'd never tell you, and my tendency to run naked down the street or break into long, uncontrollable crying jags, and I concede the doctors may be onto something.

My glitches don't define me. I love my life and, although the lows are ass-kickers, the highs make it totally worth it. (Nobody talks about it, but for me the upswings of mania are truly, deeply, fabulously, furiously fun.) I'm outing myself because Neal's suicide makes everyone who knew him wonder if there was some way they could've shown support and love while encouraging him to get help.

I keep my glitches under control by fighting the lows like a person fighting cancer. I limit booze, exercise daily, do yoga, acupuncture, meditate, pray, try to get enough sleep, see the shrink when I must, play music as often as possible, and make a mindful choice to look for the good in this whole beautiful catastrophe. So far, this has worked for me, but everyone is different.

If you think you might need help, you probably do. Here are some places to start:

You don't have to white-knuckle it. There are more support and help options now than ever—many offering free treatment for musicians with mental health issues. Don't wait, get help.

Let There Be Light in Your Tone

Reader Guitar of the Month: A Family Treasure