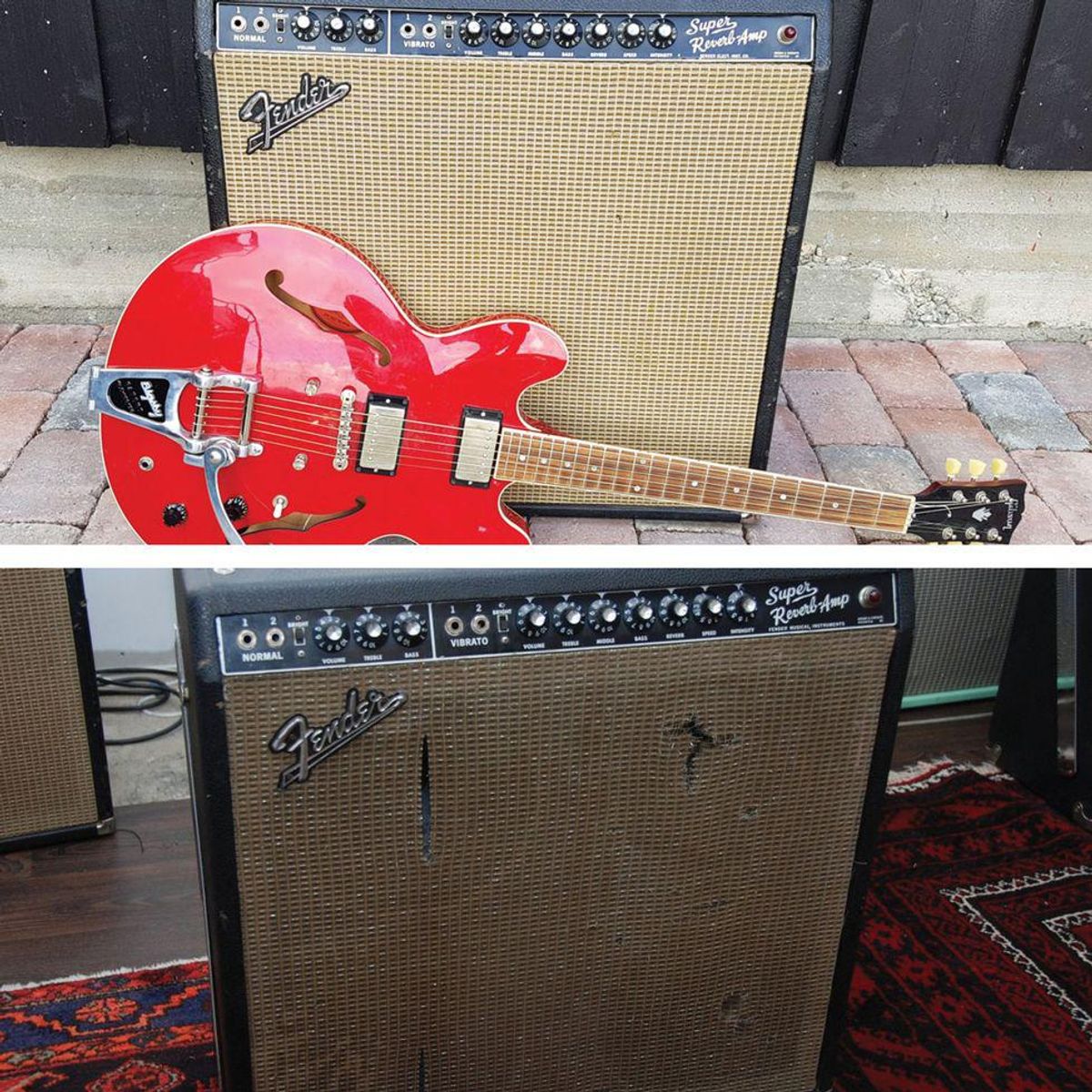 These before and after photos show the rough condition that our columnist's '65 Super Reverb arrived in, and the worn-but-dignified look of his restoration. Of course, a shiny red ES-335 with a Bigsby pretties things up, too.

Our columnist shares a love story about his longtime passion for the 1965 heavyweight that’s his No. 1.

Let me tell you the story of my first vintage Fender amp, which I call “No. 1"—the 1965 Super Reverb that I consider the greatest guitar amp I've ever heard and played.

When I was a teenager, in the late '80s, I had a 25-watt Fender Sidekick and a bigger, 2x12, 40-watt Marshall Valvestate. They worked well for the Gary Moore and Jeff Healey blues-rock licks I was into then. When I moved to Trondheim, Norway, in 1998 to study at the university, I went back in time and listened to classic blues from Muddy Waters, Buddy Guy, Albert King, B.B. King, and Freddie King. I learned they all played Fender amps, at various times, and when I saw Stevie Ray Vaughan's legendary Live at the El Mocambo concert film, where he played a Vibroverb and a Super Reverb, I knew I had to get a black-panel Super Reverb. So I got in touch with a local guitar shop called Tre45, and they helped me find a Super Reverb in the U.S.

A few months later, I paid €1,400 for a beat-up Super Reverb dated January 1965 that came via boat. The amp looked real rough and had large cuts in the aged brownish grille cloth. It had replacement Mojotone speakers with weighty ceramic magnets and large speaker coils. The shop installed a heavy-duty step-down transformer in the back to cope with 230V, making the amp extremely heavy. Despite the weight and rough looks, I loved it. It played twice as loud as my brother's 1968 transition-era Super Reverb with original square-magnet CTS alnico speakers. Back then, volume and punch meant everything, and I hadn't yet developed an appreciation for the CTS alnicos, which later became one of my favorite speakers. Neither did I have much experience with how speakers affect tone. My No. 1 sounded louder, more mellow, and creamy compared to a typical black-panel Super. Because of my amp, my brother sold his precious, vintage-correct '68.

Twelve years later, in 2010, I started trading Fender amps on a larger scale, finding them on U.S. eBay and importing them to Norway, where I swapped power transformers and did basic service like tubes and cap jobs. I eventually developed a taste for vintage-correct tone and pursued amps in original or mint condition. I was eager to learn, and systematically A/B-tested all black- and silver-panel Fender amps, with all possible speakers and circuits. I also experimented with newer replacement speakers from Weber, Jensen, Eminence, Celestion, and WGS, and tried all kinds of circuit mods.

"Because of my amp, my brother sold his precious, vintage-correct '68."

I decided to replace my Super's Mojotones with a set of vintage-correct speakers for an authentic pre-CBS sound. I found a 1965 Super in really poor technical condition and swapped the grille cloth and the factory-original CTS ceramic speakers into my No. 1. Now my amp was restored to original condition, with speakers with matching manufacturer date codes, and, more important, it sounded better! The new-old speakers added more clarity and crispness, which I particularly enjoy with a Strat's out-of-phase, quacky tone in the in-between pickup positions.

Other amps have caught my affection, too. Not surprisingly, I find the narrow-panel Fender Bassman a great amp, but unfortunately it lacks reverb, which is a big deal to me. Same goes with the Marshall JTM45 and JMP50 amps from the '60s. They have great crunch but lack some transparency and clarity when used with closed-back 4x12 cabinets. I've also had the pleasure of owning and playing some popular boutique amps, like the Two-Rock Custom Reverb, Victorias, Headstrongs, Bad Cats, and others. Compared to vintage amps, they are more robust and have high quality materials and components that survive longer on the road. I also like how the solid, thick cabinets in some modern amps produce a tight low end. All the boutique amps I've tried sounded good, different, and had more tone options than my Super Reverb, but when I played those amps for a long time or at gigs, I found myself confused with all the tonal options and I end up dialing in a sound as close as possible to a Super Reverb. I can't help it. That is how a guitar is supposed to sound, in my ears. And nothing sounds more vintage Fender than a black-panel Super Reverb, in my humble opinion.

If you haven't played one, try the huge tone and dynamic response within the big and airy 4x10 speaker cabinet of a Super. It offers a pure, natural, and transparent tone and connects with your guitar in a physical way when you crank the amp a few meters behind you on a larger stage. If you need a little more crunch and early break-up, add an Xotic RC Booster and see my April 2020 column, "How to Get Big Tones on Small Stages."