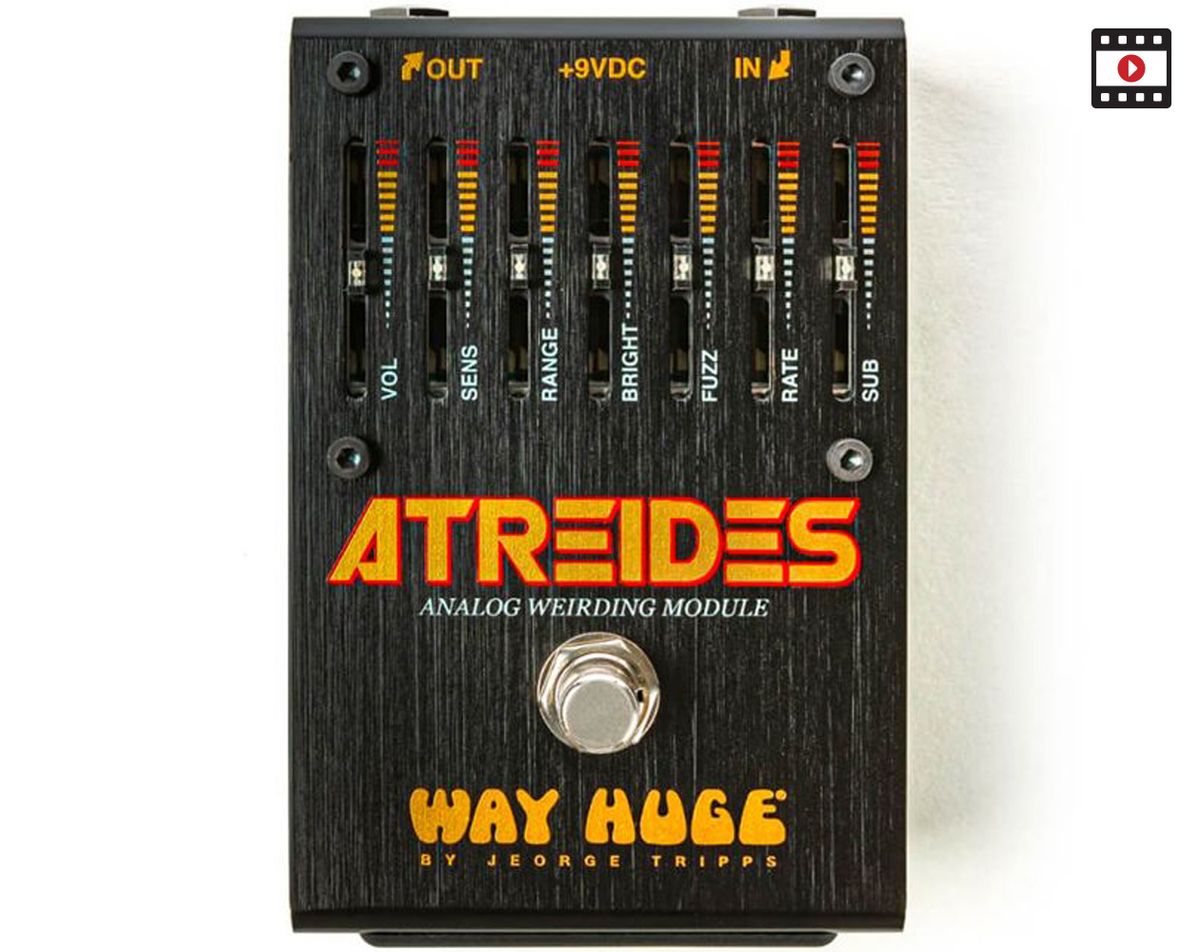 Sub-octave, fuzz, phase, and envelope filter collide in a potent pedal that brings the weird, but dishes many powerful, practical tones.

Take a gander at Way Huge's Atreides Analog Weirding Module. Then recite that name back to yourself. If you didn't know that Jeorge Tripps was behind it, you'd probably guess it's another mutant glitch machine from the stompbox industry's lunatic fringe. And you'd be partly right! The Atreides does indeed get bizarre. But as appropriate as the Weirding Module name may be, it also undersells the pedal's practicality and versatility.

The Atreides is a fantastic fuzz. It's an earth-shaking sub-octave effect. It's also a highly idiosyncratic phaser and envelope-controlled filter. All of which can be re-combined, twisted, and mixed via an elegant set of slider pots that make unearthing its secrets an intuitive joy.

Cosmic Machinations
Way Huge's Atreides Analog Weirding Module is named for a weapon wielded by Paul Atreides, the protagonist in David Lynch's film adaptation of Frank Herbert's Dune. In the film, the Weirding Module uses thoughts and sounds generated by the user to unleash destructive power. Sadly, Way Huge's Weirding Module isn't telepathic, nor voice-control augmented. But its control array, which is inspired by Electro-Harmonix's short-lived Mini-Synthesizer from 1981, often feels both intuitive and alchemical—inviting creative and unorthodox approaches to tone shaping.

The seven sliders all have mid-point detents and exhibit a firm resistance that ensures settings stay in place. Each one is capped by a blue LED that illuminates when the pedal is on. Messing with the Atreides' sliders in random, chaotic fashion is great fun, and just about any setting sounds interesting. Generating predictable, reproducible results takes more practice—partly because the controls are highly interactive, but also because Atreides aggregates an uncommon assemblage of controls.

Whipped by the Winds of Arrakis
The Atreides' sub control adds one- or two-octave-down tones, depending on how you set the internal slider switch. If you've ever used an MXR Blue Box, you'll note the similarities in touch, feel, and tone in Atreides' sub function. According to Tripps, the similarities are not coincidental. If you're a dedicated Blue Box user, the many twists on that legendary MXR's tone available here are worth the price of admission alone. Fat, funky synth-like lead tones abound when you use a neck pickup and play above the 12 th fret. But you can also subtract bright tones entirely, crank the fuzz, and detune your guitar a few steps to replicate the gargantuan sound of tectonic shifts.

The rate slider controls the rate of the phaser. This effect is always on. And though the feedback or intensity of the phase can be dialed back to a subtle wash or up to awesome extremes via an internal trim pot, it is almost always perceptibly present. I suppose this might be a deal breaker for some who want to hear the fuzz, octave, and envelope effects sans modulation.

You can also subtract bright tones entirely, crank the fuzz, and detune your guitar a few steps to replicate the gargantuan sound of tectonic shifts.

But I find it's usually a welcome texture and can add unexpected wobbles and gurgles as it interacts with the fuzz, sub, and filter. The phase can also be quite smooth and liquid at many settings, save for its maximum levels, where it takes on a very pronounced pulsing-ray-gun effect.

The fuzz is one of the Atreides' best and baddest features. It's always present in some form, even at the lowest fuzz levels. And it's truly menacing—particularly when you add a heap of high-end sizzle from the bright slider. It's capable of surprising sustain, depending on where you play a given note on the fretboard (the 5th and 6th strings are especially resonant, particularly around the 1st through 5th frets), though even the longest-sustaining notes will shut down abruptly in the fashion of a gated fuzz. I found that low-output single-coil pickups generated the smoothest fuzz, while fatter humbuckers tend to make the output more sputtery. The Atreides may be a touch too unpredictable to be a frontline, go-too fuzz for a traditional player. But its ability to communicate string and overtone detail makes it capable of covering many such duties, if you're further out on the freak spectrum.

The Atreides' envelope is less intuitive than the other functions. And the envelope sensitivity control in particular can feel vague if you leave your guitar volume wide open. These limits in envelope sensitivity are a tradeoff for the mammoth quantities of gain on tap—largely because high gain tends to reduce a filter sensitivity pot's range. But I don't think I would trade the savagery of the Atreides' fuzz for a little extra sensitivity in the envelope, and it's still very responsive to guitar volume attenuation. A little less gas from your guitar makes the output tighter and more focused, with fewer glitchy, splatty overtones. At these settings the pedal produces punchy, concise tones that are great for staccato picking or funky bass lines. Classic, vowel-y envelope sounds can also be found at these settings, though single-coils seem to generate them most easily.

The Verdict
The Atreides' tones range from arresting and unusual to downright deviant, but its sensitive, well-considered, and smartly designed features make the pedal surprisingly varied and forgiving. While the Atreides welcomes and rewards a chaotic approach to tone shaping, you can still craft precise tones with practice. The big variable in the Atreides' performance envelope is the interactivity among controls, because one little shift in, say, the sub, can totally change the way the fuzz relates with the phase.

Humbuckers and higher-output pickups, too, can change those relationships. And at times, these sensitivities can leave you longing for a preset option. On the other hand, the presence of digital control would have probably elevated the Atreides' price well beyond the $200 threshold. Given how many wild and wooly sounds you get for $199, we'd argue that Way Huge settled on a cost/performance sweet spot.