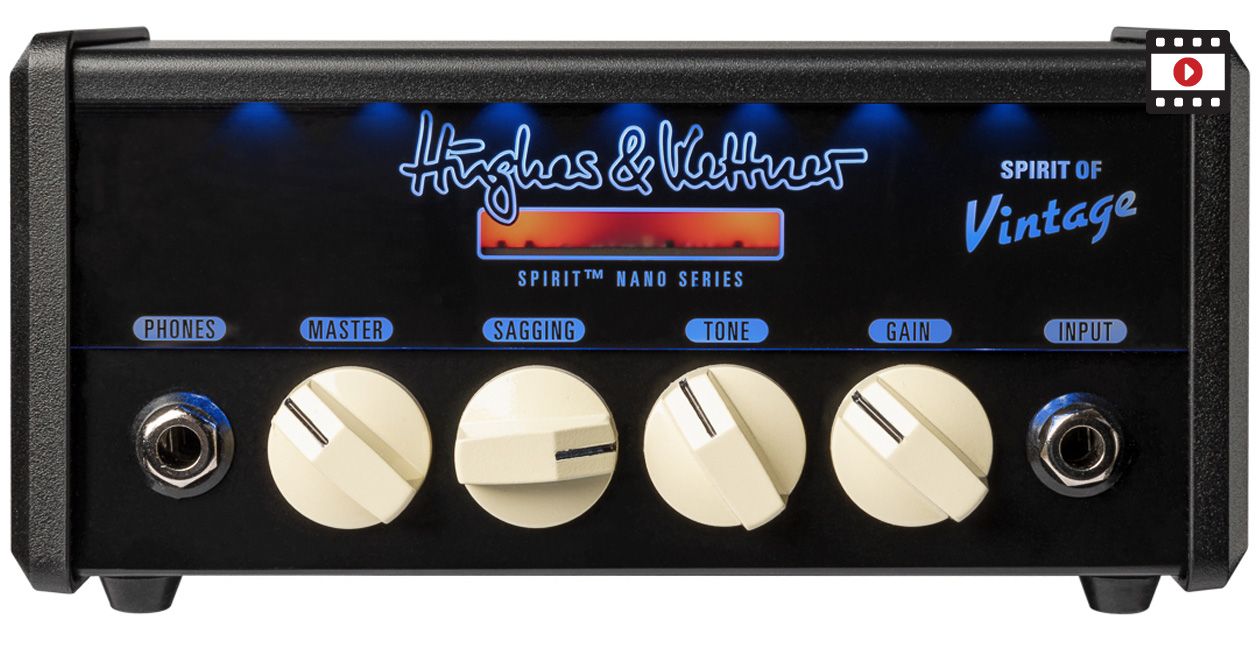 If you’re an open-minded player, it’s hard to not appreciate micro amps like the 50-watt Hughes & Kettner Spirit Nano—Spirit of Vintage. Some old-school dogmatists scoff at these light, compact, solid-state wonders. But while they don’t deliver all the depth and nuance of the best tube amps, they are capable of great sounds, and an appealing, affordable, and practical alternative for apartment dwellers, city folk, or musicians for whom guitar is a single ingredient in a wider musical expression.

The Spirit of Vintage is part of H&K’s Nano series, which also includes the higher-gain Spirit of Rock and the even more aggressive Spirit of Metal. But after spending time with the plexi-inspired Spirit of Vintage, it’s easy to hear how its wide range of clean-to-filthy sounds could make it the most widely appealing amp of the bunch—particularly at just $239.

Bask in the Glow
H&K is tight lipped about the makeup of the Tone Spirit Generator—the visibly glowing, 20-pin, sealed PCB that is home to the amp’s primary tone-shaping components. But essentially it recreates the topology of a tube amp with solid-state circuitry. That’s not a new idea, but H&K claims to have more effectively replicated the liquid, irregular, give-and-take qualities that make tube amps appealing.

The control set, which consists of master output, tone, gain and a “sagging” knob, is intuitive. The sagging control is perhaps the most beguiling of the bunch. It’s designed to emulate the saturation, compression, and dynamic qualities of tubes at their limit. It accomplishes that to an extent, though it also seems to work a little like a presence control, adding high-mid content as you go. I tended to use it judiciously to let the amp’s appealing high-end breathe a little more readily.

High strings and notes ring with detail and percolate with high harmonics that can be less pronounced in compressed tube amps.

The Spirit of Sass
The Spirit of Vintage impresses most in near-clean and mid-gain settings. The former is a ticket to power-pop and roots-rock heaven, with a Fender bridge-position single-coil in the mix. Here the amp sounds sassy, lively, and exciting. High strings and notes ring with detail and percolate with high harmonics that can be less pronounced in compressed tube amps. If there’s a setting on the H&K that might make you indifferent to the tube versus solid-state question, this is certainly one of them. The mid-gain output is similarly alive. And here again, the amp’s capacity for detailed highs and high-mids really shines.

If there is a shortcoming in the Spirit of Vintage’s performance envelope—and a most-perceptible difference between it and vintage tube amps—it’s that the H&K can sound sizzly at the highest gain and sagging settings. These spikes in the high-mids and high-end can add energy to lead runs, but they tend to render chords pretty messy. Heavy fuzz, like the Sovtek Big Muff used for this evaluation, can also sound a little less silky at high gain settings. That’s hardly surprising coming from a $239 amp that you can hide in a winter coat pocket, but it is surely not a deal breaker.

The Verdict
For such a little amp, the Spirit of Vintage manages to sound both tough and quite cultivated. It can be the amplifier foundation for a small home or apartment studio. You can use it to record with an interface and the appropriate cabinet emulation tools. And with the right cabinet, it’s powerful enough to gig with just about anyone.

The issue of a cabinet, however, is a real consideration that can blunt your enthusiasm for the very nice $239 price—largely because you’ll want one (or a good cabinet emulation) to get the very best sounds out of it. H&K’s own TM 110 is the least expensive of the company’s cabinet options, which, at $349, is 100 bucks more than the head itself. And while there are less expensive options from competitors, it would be a shame to waste the Spirit of Vintage’s virtues on a cheap speaker. What’s undeniable about the Spirit of Vintage is its versatility. It sounds superb in many common applications. And in some settings and arrangements, its liveliness and clarity may, in fact, make it a preferable option to a tube amp.

Be sure to check out our First Look demo of the full range of Hughes & Kettner's Nano—Rock, Metal, and Vintage: