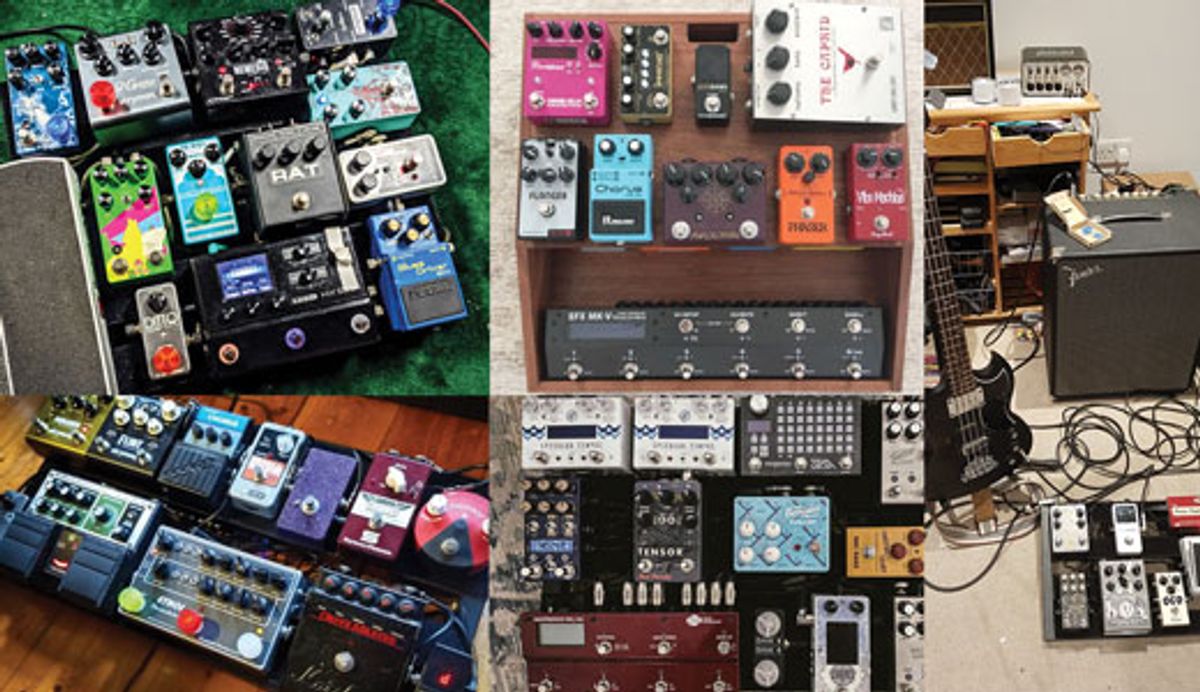 We received so many submissions from readers, we had to do a round two. PG's axe-wielding disciples show us their personal pedal masterpieces.

This is my bass board. It started off as a an Electro-Harmonix Bass Big Muff and a Korg Pitchblack tuner, and over the years has morphed into this monochromatic filth machine (unintentional, but glorious). I play a Gibson SG bass through this into a Fender Rumble V3 500-watt amp (the combo with 2x10 speakers).

You can hear some of these in action in my current band, Muscle Vest, and my old band, Thunder on the Left.

Here’s my current big board. I also run a small one with only a Boss Blues Driver, Danelectro delay/chorus, and a Dunlop Octavio for most occasions. However, this big board is the possession I’d run into a house fire to retrieve. It just makes me play better!

I’m a Texan (Houston) and I wear boots most of the time. Not really boots conducive to pinpoint accurate pedal stomping, so the knobs give me a bigger target, and also allow me to color coordinate. When playing with a set list, I keep markers in my bag, so I’ll make a mark by the tune for what effects I typically use (gold for high overdrive, green for delay, etc.).

My pedals are, in order of signal chain:

I’m a worship leader based in North Carolina. Here’s the signal chain to my pedalboard, which is a Pedaltrain Novo 24:

First, I have a Goodwood Interfacer out to a TC Electronic PolyTune Noir, to a Jackson Audio Bloom, which then hits the RJM PBC/6X.

Stereo out of the PBC to two GFI Specular Tempus pedals. I use one for delay and one for reverb.

Return to the Goodwood Interfacer.

Selah Quartz is a MIDI box for the Thermae, and I prefer to handle tempo that way.

It’s all powered with two Strymon Ojais and wired up with Sinasoid cables.

I live in Johnson City, Tennessee, and use this board in my band, Decade of Deceit. It was custom-made by me and has a flip-up top panel that hides a Truetone 1 Spot power supply, all of the cables, connections, and a vintage Japanese Boss HM-2. The front row features a Plutoneium Chi-Wah-Wah, a DigiTech Whammy Ricochet, and a GigRig G2 controller. The top row has a Shure wireless unit, VFE Pinball EQ, Mooer Acoustikar, OMEC Teleport, Boss SY-300, and a Boss RV-500 and BBE MS-92 Mini Sonic Stomp, both of which go through the effects loop of a Kruse-modded Marshall JVM410HJS. The side has a Rockboard Patchbay installed for easy hook-up. I’m not a fan of Velcro, so I found a solution with special band ties that are easily moveable that keep the standard-sized and mini pedals secure. It looks like a lot for a pedalboard, but I wanted the versatility to basically create any sound to cover clean, distorted, and acoustic guitar sounds as well as keys, synth, organ, or other parts whenever necessary and to create new sounds and textures.

I made my pedalboard from scratch using a Schmidt Array board as inspiration. There’s also a Radial StageBug in there, when using two amps, to eliminate ground loops. After seven years of using a Kemper Profiler, I rediscovered tube amps and pedals to really hone-in on my own tone. The board is mainly used in the studio into a Victory V40 Deluxe and a Fuchs ODS 50.

6. Gustav Nilsson: The Biggest Board of the Year

I’m from Stockholm, Sweden, and this is my “more is more” pedalboard, with 53 pedals. I tried my best to get everything in focus, but the board is so big that it got a bit troublesome. The boards are built by my father (he’s a blacksmith), who forged together pipes from my sketches and painted them black. This is what I use at home with four different amps. Of course, it’s impossible to bring the board to gigs, so then I have to choose the most necessary ones for the gig and fill a smaller board with them. Power is provided by a Cioks Pussy Power, Voodoo Lab Pedal Power ISO-5, Voodoo Lab Pedal Power 2 Plus, Decibel Eleven Hot Stone Deluxe, and a Cioks TC10 (and some pedals also have their own power supplies).

7. James Forbes: Better for the Back

Here is my humble board. This board has gone through countless iterations until I “settled” on this version. (Let’s be honest, do we ever really settle?) I started my pedal journey in 2013, purchasing and attempting to mod the Boss Blues Driver, along with some other pedals, for bass. Eventually, with the mantra of “buy for what you’ll get” and a move to guitar as my primary instrument, I purchased a Pedaltrain Pro and filled it to the brim. Since then, I’ve trimmed down a bit to this Pedaltrain Novo 18 (my back thanks me). Sadly, trimming it down means I had to leave my beloved Line 6 DL4 and DigiTech Whammy off the rig. They just take up so much space!

I have my pedal chain split between two boards, which is done in consideration of my back, but also as a matter of convenience, being that I have one pedalboard set up to run by itself if the gig calls for it. I would miss all my swirly, loopy-delayed goodness on board two, but I can omit it if need be.

Since the first time I saw the guitarist for my dad’s wedding band (they’re in their 80s and have played together more than 50 years) crack out his brand new Boss CE-2, HM-2, and DM-2, I’ve been fascinated by these brightly colored soundboxes. To sum it up: I’m a kid and they’re my candy and that’s that.

The flow of my signal goes as follows:

This has been a 20-year journey with hundreds of effects pedals bought, tested, and sold with the cycle repeating until I landed on the below pedalboard configuration. Here’s the pedal chain and reason I picked each effect for the pedalboard I made by hand out of Tasmanian blackwood. I live in Tasmania, so I wasn’t able to pop down to the local guitar store and get Evidence Audio patch cable as they don’t stock this brand, but I’ve ordered online.

MusicomLab EFX MK-V: I wanted a GigRig but couldn’t afford one, so I settled on this. I have no regrets. It’s a super versatile unit and I love the ability to change the order of effects per preset, along with naming presets and song mode allowing you to have intro-verse-chorus-verse-outro, etc.

Real McCoy Picture Wah (not pictured run before board): Inspired after the original VOX wah pedals of the time, this one is a great interpretation including the Halo inductor. It also plays well with Fuzz Face circuits. This into the Eric Johnson Fuzz Face with Vibe-Machine and Boonar is a sound to behold.

Dunlop Eric Johnson Fuzz Face (not pictured run before board): As many know, the Fuzz Face circuit can be temperamental. I went through many transistors, silicon BC (108, 109, 183) and germanium variants, but landed on the Eric Johnson signature with BC183 transistors. It has a unique ability to play chords and still pick out each note whereas many of the others I tried were great with single-line work but as soon as you added in a power chord, it was mush.

Catalinbread Talisman: Last in the chain and always on. I’m a huge plate reverb fan over any other class of reverb. Given the size of a real plate unit, this one fills the void perfectly and, although a one-trick pony, it’s the best plate reverb I’ve tried.

I spent over a decade in the film industry as a camera/steadicam operator and cinematographer (and yes, you’ve likely seen things I’ve worked on), but before that I was a studio musician. Once I had two young children at home, being gone for eight months out of the year working on location shoots just wasn’t tenable, so I turned in my union card and took a job as Gonzaga University’s in-house filmmaker in their marketing and communications department.

Sitting at home one very snowy Saturday night last February, it occurred to me how much I genuinely missed playing music. And I was constantly needing music for projects at work. So I pulled out one of my old pedalboards, spent probably two weekends just cleaning 20 years of Velcro glue and crap off of it, and started putting together the perfect one-stop marketing jingle pedalboard that could hang out in the studio at work and lay down whatever tones I needed for the variety of projects that come across my desk. I already owned a Keeley-modded RAT, the Voodoo Lab Pedal Power 2+, the ZVEX Fuzzolo, and the Keeley-modded Boss TR-2, but the Boss DC-2W Waza Craft pedal’s augmentations to older Boss units I already owned were intriguing. Like any self-respecting guitarist, I felt compelled to buy new toys. I’ve always flown a couple different flavors of Tube Screamers in my board at the same time, and the JHS Bonsai was just the best thing I’ve seen in ages.

It was great to haul out stuff that had been sitting in a crate for over a decade, breathe some new life into it, and get back into playing on a regular basis (and get paid for it).

All powered by a Voodoo Lab Pedal Power 2+ and sitting on a mid/late ’90s Pedaltrain. (Hence the PP2+ having to go on top of the board, because they weren’t making them with enough clearance to sling the power supply under the board yet.)

Maybe I have too many pedals! My board is always changing but this is what I currently have: Band of Gypsies fuzz, Seymour Duncan Pickup Booster, Electro-Harmonix Octave up-small stone, PolyTune 2, Marshall Drive Master, Ethos Overdrive, Boss RE-20 Space Echo, Rocktek Chorus, Strymon flint, Strymon Brigadier, TC Electronic Ditto Looper, MXR EQ under the pedaltrain. All powerd by a Truetone 1 SPOT Pro CS12 and a GigRig Isolator.

I’m from Winnipeg, Manitoba, Canada. I play in a band called the Mariachi Ghost. My pedalboard has been an evolution over the years, and I’m not quite there yet, but I’m on track to make it better.

I run a 2014 Gibson LP Custom (ebony) and a modded American Strat (from 1998 and 2004 parts, with a Seymour Duncan SSL-5 on the bridge) with S-1 switching. I usually run a stereo setup with two Deluxe Custom Reverb ’68 reissues, but I can use the splitter to make a mono out when I can only source one amp while on tour.

This year, PG received more pedalboard submissions from readers than any other year, which makes us very happy. If you’re discerning and passionate as ever about your effects, you’ve come to the right place.

A few of you mentioned catering your boards to lighten the load on your backs, which makes sense considering that this roundup includes one of the biggest boards ever submitted: It has 53 pedals. Seriously! We’ve got some rocket-scientist level tone tweakers in the house, and we’re extremely impressed at the clarity and nuance with which they’ve explained the wiring setups and how they use these boards. So here we go … step on, and bask in the craft of the pedalboard. Until next year!