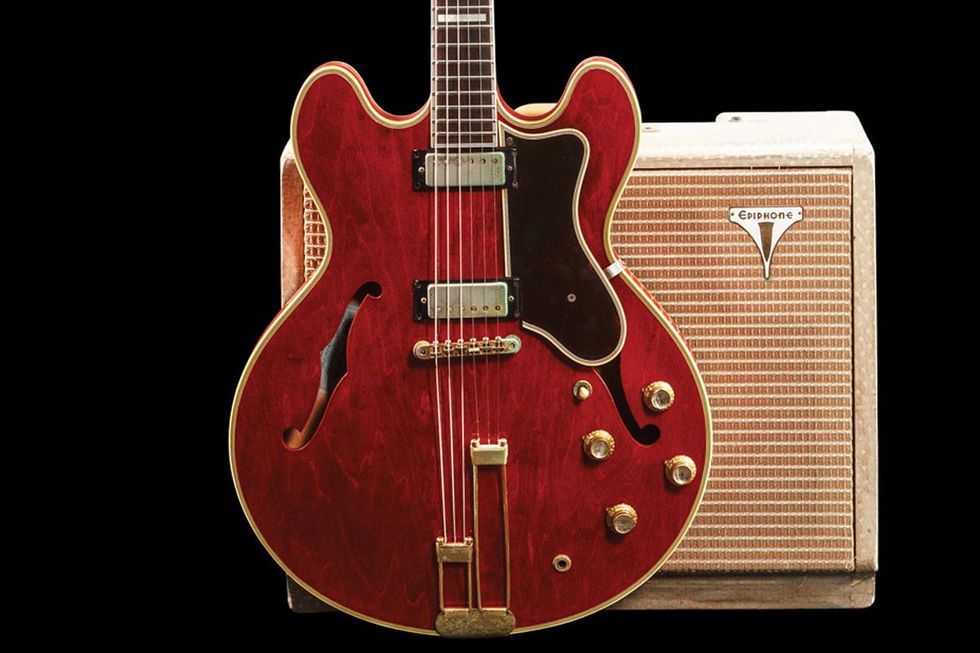 This month's star, a 1967 Epiphone Sheraton E212T, slouches against an early Devon—the first Epi-branded amp built by Gibson. The 10" combo has just a volume dial, two 6V6 power tubes, a 5Y3 rectifier tube, and a 12AX7 driving the preamp.

This semi-hollow 1967 Sheraton embodies the "wow" in John Lee Hooker's "how, how, how, how"—and much more.

It might seem unlikely that one semi-hollowbody guitar would appeal to a list of players as wide ranging as John Lee Hooker, Noel Gallagher, and Mick Cripps of L.A. Guns, but the Epiphone Sheraton has done service in all six of those hands—and many, many more—since its introduction in 1958. This month, we're focusing on a classic, cherry-finish 1967 Epiphone Sheraton E212T.

The model's backstory starts with Gibson purchasing Epiphone, its longtime rival in the hollowbody guitar market, in 1957. The next year, production of new Epiphones at Gibson's factory in Kalamazoo, Michigan, began, using leftover parts from the old Epiphone plant in Queens, New York—where many of the company's parts had been destroyed in a suspicious fire. Familiar Epiphone model names were used on many guitars in the new Gibson-built line, including Triumph, Deluxe, Zenith, and Emperor. But the brand's new electric thinline guitars aptly got new names, including the Sheraton (developed in 1958) and the Casino (introduced in 1961).

Beginning in 1961, Sheratons began sporting Seth Lover-designed mini-humbuckers. Dig the triple-ply binding on the pickguard and around the fretboard.

Debuting the same year as Gibson's ES-335 and ES-355, Epiphone's Sheraton—with gold hardware, multi-ply binding, and other upscale appointments—was a fancy counterpart of those semi-hollows. Until around the end of 1961, the Sheraton was equipped with so-called "New York" pickups—leftovers from the pre-Gibson inventory. At that point, they were replaced with Seth Lover-designed mini-humbuckers. The unique, two-tiered Frequensator tailpiece designed by Epiphone in the late 1930s remained an option on the model, even after the Trem-o-tone vibrato tailpiece was introduced on the Sheraton in '61.

Until around the end of 1961, the Sheraton was equipped with so-called "New York" pickups—leftovers from the pre-Gibson inventory.

The 1967 Epiphone Sheraton E212T you're looking at has the typical features used in the year it was made, but it's nonetheless quite handsome. These include a 1-piece mahogany neck with a 5-ply bound-rosewood fretboard, pearl block inlays with V-shaped center wedges, an elaborate flowering-vine-inlay headstock surrounded by 3-ply binding, and a multi-ply bound, laminated maple body. The two mini-humbuckers, Frequensator tailpiece, and Grover Rotomatic tuners are gold-plated. The control set is standard: a 3-way pickup selector and two volume and two tone dials. The original list price for a cherry-finished, Frequensator-equipped Sheraton like this was a then-princely $580 plus $60 for a hardshell case. The current value for one in excellent all-original condition is $5,000.

Here's a close-up on that flowering vine headstock inlay—certainly a classy embellishment—as well as ol' one-knob's control panel: volume dial, a fuse, an on/off toggle, and a jewel light. The rest is pure tone.

Sources for this article include Epiphone: The Complete History by Walter Carter, Gibson Electrics: The Classic Years by A.R. Duchssoir, and The Gibson 335: Its History and Its Players by Adrian Ingram.

From Your Site Articles
Related Articles Around the Web
epiphone

Close-Up on a “Perfect” Stratocaster