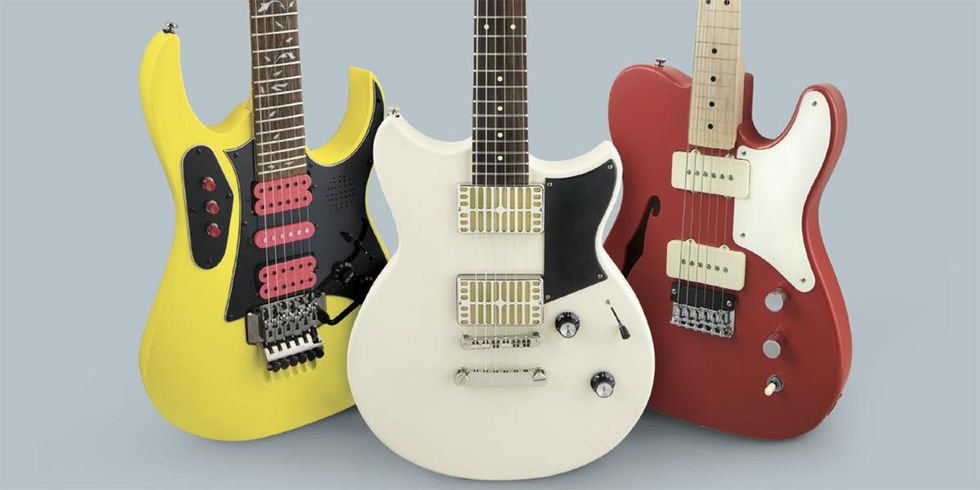 How we turned three affordable Squier, Ibanez, and Yamaha axes into custom instruments like no other.

From YouTube to Instagram to myriad DIY forums, the internet is filled with modders showing off their latest projects. Name your flavor of guitar gluttony—from Gibsons to Fenders, offsets, and shred machines—and there's a virtual place you can go to both feed your craving and feel better about how much time you spend obsessing over how to make your axe sound and play more to your liking. "You think my tweaking tendencies are out of control? Check out this guy…."

Because there are so many places to get each other's take on which pickups or nut material will yield such-and-such sound, this year's No-Brainer Mods outing (our fourth so far) takes the same tack as last year's. As with all past NBMs, we've purchased a handful of quality affordable axes, but rather than just upgrading them with one of the innumerable sets of great pickups on the market, and maybe a fancier bridge or set of tuners, we're taking a more adventurous approach. Guitar shops the world over are full of well-made instruments you can get brand-new for $300–$500 and then turn into something you'd never be able to buy off the rack simply by investing a little more time and money. In the process, you'll have a whole lot of fun and hopefully end up with an inspiring new "custom" instrument. If something goes a little haywire or the experiment's end result isn't quite as mind-blowing as you'd hoped, at least you haven't lost a ton of dough—and unless you've really botched things, you can always try out your next great idea on the same "canvas."

Considering how many cool, well-made affordable guitars there are, what's a "no-brainer" about all this isn't so much what we do in our No-Brainer Mods series—it's that you take advantage of the waiting gold mine of possibilities to do the weird stuff that occurs to you. We're just here to stoke your imagination a little.

Last year, we had a blast walking the mod path less taken. We turned a T-style into a 12-string, gave a Squier Starcaster the Jazzmaster trem so many offset aficionados feel it needs, and made a semi-hollow Ibanez's dreams of sounding more orchestral a reality. This year, we're taking on a couple of mods that are roughly as ambitious as those, but we've also thrown in one for folks who need something a little less invasive to chew on during pandemic downtime. We've again enlisted guitar-repair guru Dave Helmer, a two-time Red Wing lutherie graduate based in Iowa City, Iowa, to carry out these glorious transformations. —Shawn Hammond

Before and After Mods Video Demo

Squier instruments have long been a staple for modders looking for an affordable, solid-playing axe to put their own personal touch to. Beyond the brand's usual classic looks and respectable build, the Paranormal Cabronita Telecaster Thinline ($399 street) we've chosen for our first mod has a couple of additional neat things going for it. First, it's lighter than virtually any thinline/semi-hollow guitar we've encountered in this price range. Second, the fiesta red finish is so upscale looking it's easy to almost overlook the Fender-designed alnico Jazzmaster pickups. We thought about swapping them with a set of Seymour Duncan Antiquity or Curtis Novak pickups, but then we remembered our "more adventurous" MO. Besides, the pickups sound pretty good (astute JM fans are bound to note the unusual inclusion of adjustable pole pieces).

As I pondered what sort of specialized sonics might be cool to add to the Cab, I hit on the idea of turning this familiar-feeling guitar into a fretless sitar. Having done fretless conversions before, Dave called me a little after starting the project to make what ended up being a fantastic suggestion: Why not keep the frets on the lower half of the neck and ditch 'em on the upper portion? That way the "Cabronitar" could be used as both a chordal and a lead instrument. Genius! In the end, we decided on fretless past the 10th fret.

At first we thought we'd just buy one of those Gotoh sitar bridges that Danelectro uses on its Sitar and Baby Sitar instruments. However, as of publishing time, it appears Gotoh is no longer making them. This actually turned out to be a boon, though, as the Gotoh wouldn't have fit in the space between the Cabronita's bridge and bridge pickup, and would have required more drastic measures with the bridge and/or other hardware.

Even so, keep in mind that—at a quick glance—the ebony "buzz bridge" portion of this mod looks deceptively simple. Like us, you'll likely end up needing to fashion two or three bridges before you've got all the minute cuts and surface angles right. This fine-tuning by trial and error is why you'll notice successive photos below sometimes show the guitar with strings on, then unstrung with protective tape on the surface, then strung-up again. That's because the only way to know for sure if you're getting things right is to string the guitar and see how it sounds at various points throughout the process. So you'll want to have a few sets of your chosen strings on hand. Luckily, Dave did a lot of great research and built a few prototypes himself, and the lessons he learned should help you get the nuances right, regardless of the guitar model you're modding. —SH

Steve Vai's innovative, aesthetically vibrant signature guitars have been turning heads since his 1987 debut as Ibanez's most prominent and influential artist. The JEM777 started it all. But while Vai—then fresh off both his first tour with David Lee Roth and filming scenes as the Devil's flamboyant guitarist, Jack Butler, in Crossroads—has always put the guitar's unusual "monkey grip" feature to good use, few mortals seem to be able to pull it off with similar aplomb. So we thought we'd take advantage of the grip anatomy on the JEMJRSP ($499 street) to facilitate something more practical—yet weird enough to hopefully still meet with Vai's approval. Taking inspiration from another virtuosic experimentalist, avant dreamscapist/sound mangler /former Bowie sideman David Torn, we've decided to use the space already carved out for the monkey grip to house a circuit similar to the "Tornipulator" he's had installed in guitars by luthiers Uli Teuffel, Saul Koll, and Izzy Lugo at Ronin Stringed Instruments.

David Torn dons his Tornipulator-outfitted Ronin Mirari for an epic soundscape expedition in this 2013 TEDx Talk performance at the California Institute of Technology.

Our "monkey grip-u-lator" circuit has three momentary pushbuttons for engaging 1) a lo-fi "sampling" microphone (a Shaker-brand harmonica mic) that's been added under the guitar's pickguard, 2) a 60-cycle hum (great for conjuring anarchic/deconstructionist vibes), and 3) a 1/4" auxiliary input you can use to connect, say, your phone, an old cassette player, or another outboard device to aid in your havoc-wreaking sonic adventures.

For those of you who've been shaking your heads at the two previous mods, first—in the immortal words of King Arthur in Monty Python and the Holy Grail—"You make me sad." Second, thank you for sticking with us anyway. We're rewarding you for your valiance with this straightforward mod. Although the Yamaha Revstar RS320 ($399 street) comes stock with pretty respectable pickups, we've been intrigued for the last little bit by U.K. outfit Mojo Pickups' recent Dual Foil designs—which are humbucking interpretations of the unique gold-foil pickups found on old Teisco and Harmony guitars. As we can attest, the Mojos sound delicious—which is why luthiers at boutique outfits such as Abernethy Guitars, Uma Guitars, and Deimel Guitarworks have recently been gravitating toward them.