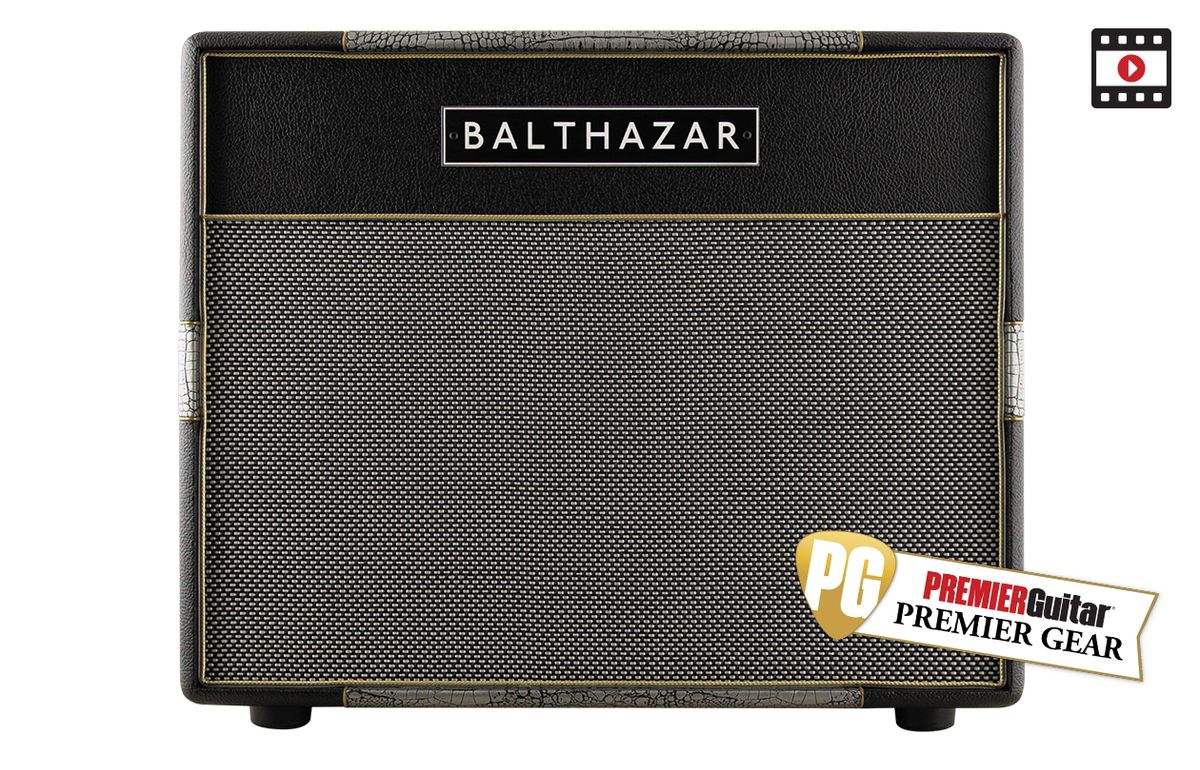 This unique, low-wattage combo produces a potent mélange of Vox and Fender sounds—and sings with a loud and outsized voice. The PG Balthazar Cabaret 13 review.

Guitarists can be a stubborn lot when it comes to amplifiers. Switching a new pedal or guitar into a rig? That's no kookier than ordering Szechuan on pizza night. But switch an amplifier and you can profoundly screw with the sound and feel of everything in a signal chain. Not surprisingly, a lot of players pick something familiar and stick with it. And when you consider that collective experimental reticence, and the ample R&D required to develop a truly unique new amp, it's little wonder the amplifier gene pool sometimes feels small.

The fundamentally appealing essence of the Balthazar Cabaret 13 is the way it sounds new, fresh, and unusual while feeling like something you've known before. It's alive, immediate, sparkling, and responsive—a main line to your fingers and guitar. And while it's built around many Vox-y components like EL84 power tubes and a Celestion Gold speaker, it will feel like an old friend to anyone who has hung a Princeton or Deluxe out on its bleeding edge, or dove deep with a black-panel Fender combo in seas of reverb and tremolo. It also might be the loudest 13-watt combo you'll play in this lifetime.

The Cambridge met a lot of de Ley's conceptual design objectives: Princeton dimensions and power, an EL84 power section to add a Vox-y edge to the voice, and reverb and tremolo that would make the Cabaret the perfect “small-stage British surf amp," in de Ley's words. But as he dissected the Cambridge, de Ley found much of the magic came from an unusual Rola alnico speaker and transformers with few modern equivalents.

The ease with which it blurs the lines between the Fender and Vox divide are a testament to the complexity and sophistication of its many voices.

So de Ley started from scratch, with the Cambridge as an ideal rather than a template, and insisting only on retaining its bias tremolo. Capturing the intangibles of the Cambridge tremolo wasn't easy. De Ley ran into ticking sounds, hum, and unpredictable interactions with the rest of the circuit that made development a protracted affair. To make a long story short, de Ley determined that reproducing the capacitance of the Cambridge tremolo's footswitch within the Cabaret circuit itself was the bizarre fix that made it all work. But de Ley's exhaustive efforts to reduce noise elsewhere in the circuit resulted in two big, additional dividends: the Cabaret was now super-efficient and lively, and the tremolo circuit could be made even more intense and rangy.

By the way, lest any of you are inclined to dismiss the Cabaret's snakeskin-pattern vinyl and gold details as flashy, keep in mind that the amp (like its cousin, the Film Noir 50) honors the livery of mid-'60s Selmers—contenders for the baddest-looking amps of the time. De Ley nods to another great British amp builder with the Hiwatt-style nameplate. But I can't help but think the name “Balthazar" in gold, Selmer-style, Old-English letters would look positively spectacular.

Your Round-Trip Ticket to Waikiki, 007
When Balthazar de Ley talks about a “small-stage British surf amp" as a design ideal, I know exactly what he means. Conceptually speaking, the combination of a Fender combo's animation and air combined with a Vox's toppy bite is enough to get me twitchy. But the Cabaret is more than an AC15 with extra-potent reverb and tremolo. And the ease with which it blurs the lines between the Fender and Vox divide are a testament to the complexity and sophistication of its many voices.

I don't have a Princeton, AC15 or Cambridge to compare to the Cabaret. But I do have a black-panel Vibrolux with particularly strong tremolo and reverb, and the 13-watt Cabaret's ability to sound every bit as rich and loud as the bigger, 35-watt Vibrolux is impressive. It's surprisingly easy to dial in near-approximate and very rich Vibrolux tones. Doubly impressive, given that I started with the Cabaret in a very biting, Vox-like setting. How do the surfy sounds of the Cabaret 13 compare to a vintage Fender combo? Interestingly, the Cabaret's top-end has a little more weight and darkness around the edges than the sparkly Fender in these clean-ish settings. There's a bit more ballast on the bottom end. The Cabaret was also noticeably louder at equivalent volumes and less compressed as saturation sets in.

Some of these attributes are no doubt down to the beautiful alnico Celestion Gold 10" speaker. Compared to the well-worn original Oxfords in the Vibrolux, the Celestion Gold has more of the bass response and mass you would hear from a 12". But I'd bet that even a lot of dyed-in-the-wool Fenderphiles would dig—and even prefer—the extra bottom end and the softness in the treble tones.

The Cabaret's intrinsic Voxiness becomes more apparent at higher volumes. Natural overdrive tones are complex and growling sounds that turn feral and AC30-explosive as you add treble from the extra-rangy tone controls.

And about that tremolo: To say it's a feature attraction would be an understatement. At its maximum settings, which are more potent than any amp tremolo I can recall, it flirts with Vox Repeat Percussion levels of intensity and flutter. But its bias design also means that more sedate settings produce incredibly lush, smooth, and contoured throbs that you can live in for hours on end—especially when you add in reverb from the powerful, 12AT7-driven Accutronics reverb tank.

The Verdict
The Cabaret 13's capacity to walk the line between vintage Vox and Fender tones—and cross over with ease—is enough to merit investigation of this very interesting, original circuit. But with its surprisingly high headroom and volume, rangy and effective tone controls, and bias tremolo and spring reverb effects that move from subtle-to-surreal, this super-dynamic, high-quality, 13-watt amp is positively addictive—and the kind of amp that might find you keeping your pedalboard under wraps for a good long while.