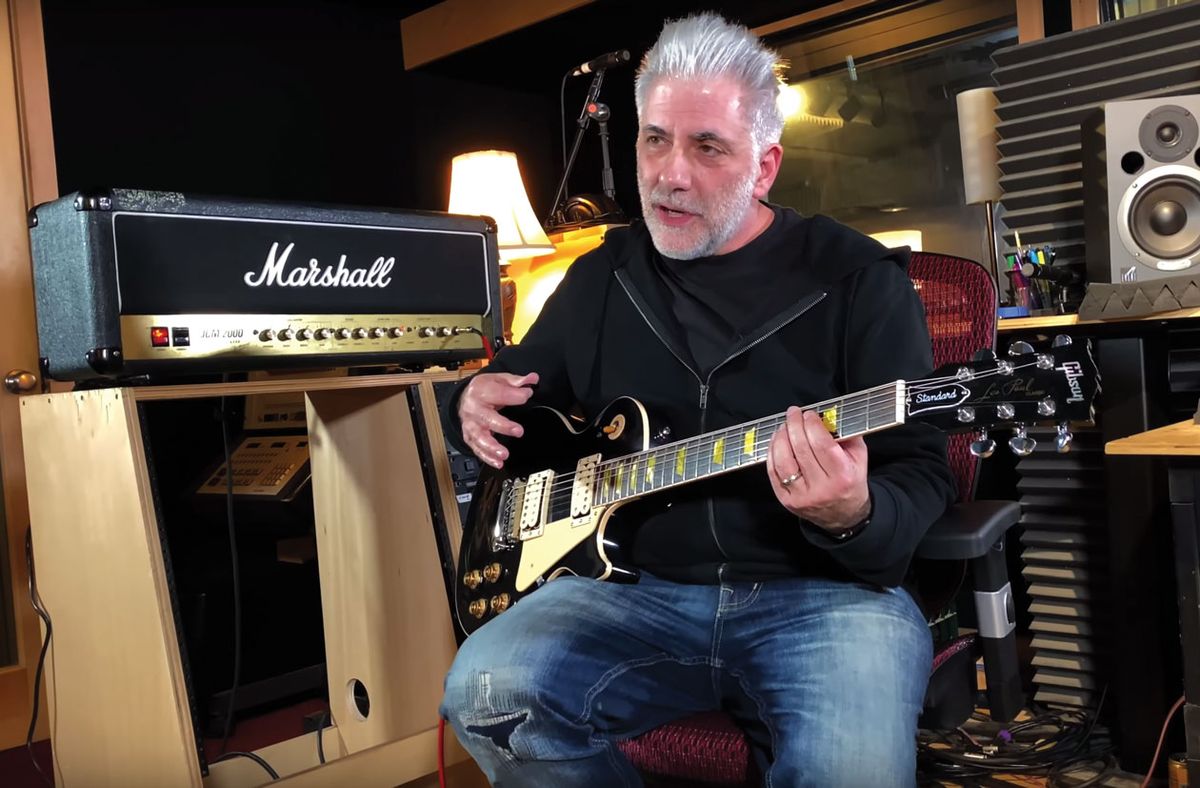 Video
Rick Beato gets the string-gauge experiment started with a Les Paul Standard running through a Marshall JCM2000.

...There's a lot more to it than whether Billy Gibbons or SRV was "right."

Greetings, tone hounds! I’d like to discuss two terrific YouTube videos Rick Beato and Rhett Shull recently made regarding string gauges. In Rick’s video, a group of players recorded themselves playing the same Les Paul and Marshall JCM2000 setup with the only variable being four different gauged sets: .011, .010, .009, and .008. Both videos reveal the differences in tone between different gauges, and I’d like to expand on this by adding a few observations I’ve discovered over the years.

Everything affects everything. In Rick’s video, he mentions a discussion he had with Dave Friedman of Friedman Amps. Dave said because lighter strings produce less bass, they help tighten up the tone—and this was one of the catalysts for Rick deciding to make a video demonstrating the phenomenon.

Dave Friedman is an old friend, and we’ve had countless discussions about tone. He has a great saying: “Everything affects everything.” In other words, each link in your signal chain impacts the overall tone: cables, pickups, amps, woods, pedals, and, of course, strings.

Each link in your signal chain impacts the overall tone: cables, pickups, amps, woods, pedals, and, of course, strings.

In Rick’s video test, they went for a classic, raunchy rock ’n’ roll tone with the Les Paul/Marshall setup. Had they used, say, a Stratocaster with single-coils, or even a P-90-equipped Les Paul, the results would have varied. If you prefer the tone of .009s in the video, it’s possible you may have preferred .010s had they used a Strat. It’s all a recipe.

Expanding on this thinking a bit, what if they’d used a 4x10 Bassman for a bluesy overdrive? The results would also vary. A hotter alnico-5 pickup would also change the tone, and if you were to use a ceramic magnet humbucker, the bass, mids, and treble would completely change! Remember to consider these things when contemplating a different string gauge.

Let’s talk SRV. In my estimation (and Rick mentions this too), it was Stevie Ray Vaughan who inspired many guitarists to use heavier strings. But Stevie played a single-coil-equipped Strat, mainly through Fender amps. He didn’t use much preamp gain because he cranked these relatively low-gain amps until they broke up naturally. His tone formula consisted of a heavy right hand and heavy strings, combined with relatively low-output single-coils into a Tube Screamer that would add mids and cut bass. The amps he used are known for their scooped mids, so you see where I’m going with this? It’s all part of the formula.

My takeaway analysis: If you’re after a fat, bluesy, loud, low-gain tone, the SRV formula—heavy strings, single-coils, a Tube Screamer, and a relatively clean, cooking, low-gain amp with scooped mids—works great. On the other hand, for a Marshall-style, midrange-heavy, tight-crunch tone, lighter strings with humbuckers and a gain-y amp—without too much bass in the preamp—will get you there.

Playability, bending, vibrato. One last thing to consider: String gauge can have a huge effect on your bending and vibrato. Heavy strings can actually make players who have a tendency towards a “nervous” vibrato and over-bending sound more controlled. Rhett Shull commented that .008s made him feel a little more tentative on the guitar. I’m sure he could get used to them over time, but his preference for overall tone and feel were .009s. That’s something to consider when switching gauges.

Thanks to Rick and Rhett for producing useful YouTube content like this. I encourage all guitarists to follow their example of learning through experimentation. Don’t just assume—discover what works for you. Until next month, I wish you great tone!